This AVerMedia Live Gamer BOLT review has given me a feeling of deja vu, like I’ve been here before. You see, back in 2018 I reviewed the Live Gamer 4K, an internal capture card that could do it all: 4K 60 FPS recording with HDR enabled, as well as lower resolutions, like 1080p, at up to 240 FPS. I awarded that capture device an Editors’ Choice award as, especially for the price of $300, it was super impressive.

The new AVerMedia Live Gamer BOLT basically does what that internal device did, but in an external casing, meaning better portability and increased compatibility with laptops. You might think this would make for an easy review, but there are a few things about the BOLT that you will want to consider before making this high-end purchase. Read on for my full thoughts and verdict. 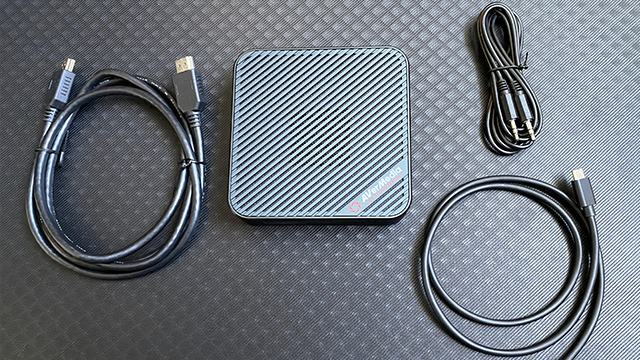 It’s right there in the name, “BOLT,” where the unique selling point of the GC555 is first teased. Utilizing the power of Thunderbolt 3, the Live Gamer BOLT is capable of delivering low latency passthrough and monitoring of gameplay, while capturing the highest quality footage. Whether you’re aiming for 4K 60 FPS HDR or 1080p 240 FPS recordings, or somewhere in between (including ultrawide aspect ratios like 3440×1440 at 100 FPS), you’ll be able to crank the settings up to 240 Mbps within the included software, or beyond using third-party tools like OBS.

As we saw with the Live Gamer 4K, the BOLT is an incredibly versatile device when it comes to the different resolutions and frame-rates that it supports. However, it’s worth noting the HDMI 2.0 in and out, meaning no DisplayPort or the newer HDMI 2.1. To work around these omissions, AVerMedia has provided a tutorial on how to clone your PC display to the BOLT without needing to use the passthrough. For a high-end device like this, which will be used by professionals as a tool for their livestreaming or video production job, this is fantastic to see. I’m happy to report that it works great, even in a single PC setup. 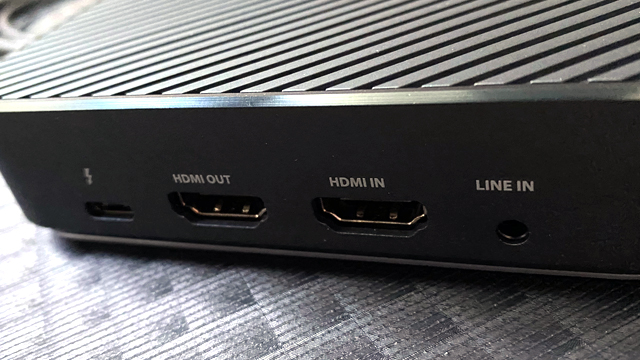 In fact, I’ll say it right here: the AVerMedia Live Gamer BOLT worked flawlessly from the start of my testing to the very end. Going from PCIe x4 to Thunderbolt 3 initially had me worried, but those worries quickly disappeared. Whether recording the 4K HDR landscapes of Death Stranding on PS4, to high frame-rate gameplay of Call of Duty: Modern Warfare, the BOLT never skipped a beat. The onscreen preview is also, as promised, low latency, though you’ll still want to use the passthrough for competitive play.

Once it’s all set up, the BOLT is glorious, but what exactly does “setting up” this product involve? Well, you’ll first want to confirm that you meet the recommended specs. Using a desktop PC, those targeting 4K 60 FPS HDR or 1080p 240 FPS will need an Intel i5-6XXX or Ryzen 3XXX or above, paired with an Nvidia GTX 1060 or AMD RX 5700 or better, as well as at least 8 GB of DDR4 2400+ MHz RAM. Laptop users will need an Intel i7-7700HQ or above, combined with an Nvidia GTX 1050 Ti or better, and that same 8 GB of RAM. Of course, you’ll also need a Thunderbolt 3 port, either supported natively on your laptop or motherboard, or via a compatible expansion card.

I actually upgraded my PC recently, with me now using a Ryzen 7 3700X, an Nvidia RTX 2070, and 32 GB of RAM. This AMD CPU has been paired with the Asrock Mini-ITX X570 board, which supports Thunderbolt 3. Intel users should find Thunderbolt 3 supported motherboards easier to track down, while most mainstream high-end laptops now rock Thunderbolt 3 with external GPUs, additional monitors, and other peripherals in mind.

Macs are not yet supported by the BOLT, unfortunately. This is a shame, as most relatively modern Apple devices use Thunderbolt 3. Hopefully AVerMedia can look into this soon, as I’m sure many professionals use a Macbook for working on the go, which could then be utilized in a gaming and/or streaming setup when at home.

Once you’ve confirmed that your PC or laptop is up to the task, it’s time to actually unbox the BOLT and plug everything in. Thankfully, this is very simple. HDMI in from the system you’re recording and HDMI out to your monitor or TV; then the optional 3.5 mm line in for additional audio from a mic, phone, or other device; before finally inserting Thunderbolt 3 for data transfer and power.

Then you just install AVerMedia’s own RECentral software (you’ll need this to capture HDR) or add the device to OBS and away you go. I use RECentral for HDR recording and OBS for everything else, as the latter can use your additional RAM as a “Replay Buffer,” meaning you’ll never miss a great moment.

AVerMedia is still including a PowerDirector license in the boxes of its high-end products, despite the software not allowing users to edit HDR content captured using the HEVC codec. It seems that you need to pay additional money for that functionality, but I think most buyers of the BOLT will be using professional software like Adobe Premiere Pro anyway. Premiere still works great for me, as it did with the Live Gamer 4K.

Also on the topic of HDR is the BOLT’s ability to tonemap HDR to SDR, meaning you can enjoy the full experience of HDR on your screen, while simultaneously sharing SDR footage without any drawbacks. The BOLT does this will little to no impact on your capture PC’s performance.

I should also mention the BOLT’s RGB lighting, which goes around the entire base of the device and pours out of a gap at the front. It’s bright, rainbow-y (if you want it that way), and can also be disabled. It might not be my cup of tea, but it’s there as an option and works as intended.

Oh, and the BOLT also has a cooling fan inside. I couldn’t hear it over my PC or console fans, so the noise won’t be a problem, but it does mean that there’s a moving part in the box which could eventually fail and require a repair (which is a concern for all fans). 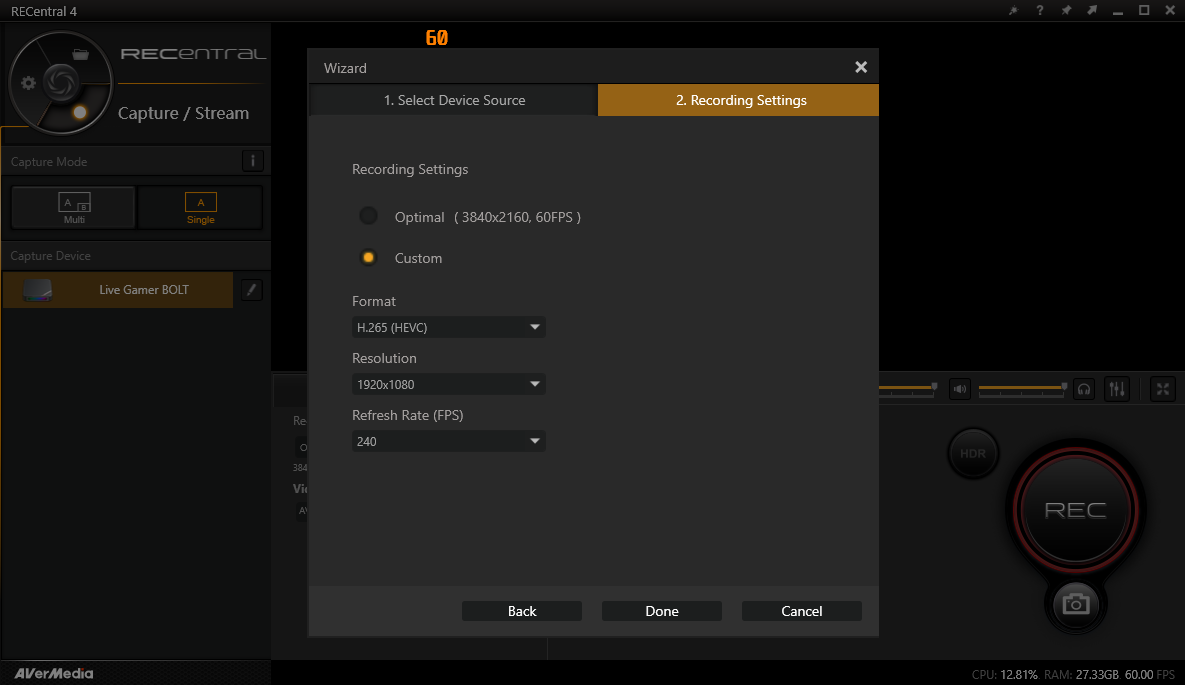 The AVerMedia Live Gamer BOLT makes a great first impression with its solid build quality and easy setup, before continuing to impress with its incredible functionality. It’s just like the Live Gamer 4K, but made external.

With that said, the current price of $449.99 (£399.00 in the UK and €449 for the rest of Europe) is definitely not cheap, and is much harder to swallow than the Live Gamer 4K’s launch price of $299.99. When you consider that the internal card can now be had for $230ish, the BOLT’s price tag becomes a bit of an issue. I guess it just depends how desperate you are for an external high-powered capture box that uses Thunderbolt 3. The $450 price tag also puts the BOLT up against the $400 Elgato Game Capture 4K60 S+, which comes with its own unique tricks like PC-free recording to an SD card, though isn’t able to capture above 60 FPS.

While prices keep on climbing, it’s still a very exciting time for gameplay capture enthusiasts, with AVerMedia and its competitors continuing to push the envelope to keep up with the most advanced gaming experiences. The Live Gamer BOLT is a killer device that does exactly what it promises, even if the audience of Thunderbolt 3 users is relatively limited.

When you click on a link from an online retailer on GameRevolution, we might earn a percentage of the value of your purchase. Learn more here.

The world is ending.
News 2 months ago
8

All new cosmetics and skins
News 3 months ago
6