The Mortal Kombat 11 1.21 update patch notes signal the first big update since Aftermath, the game’s first expansion. This obviously can’t compete with that patch, but it still has some goodies inside of it. One of the bigger parts is that it contains one of the Aftermath skin packs, which NetherRealm only recently revealed. Don’t expect big balance changes because they’re not here. 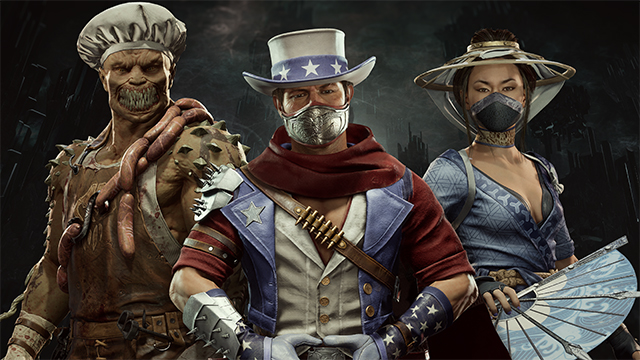 The MK11 Summer Heat skin pack is the skin pack in question and the one players get for owning Aftermath. It contains skins for Baraka, Kitana, and Erron Black. They’re officially called Off the Bone Baraka, Endless Summer Kitana, and Fireworks Erron Black, respectively. There’s no word on if people who do not own Aftermath will be able to purchase these skins.

This was unexpected but the new update has brought forth a new RoboCop announcer pack. Similar to Johnny Cage, Raiden, Shao Kahn, and Kronika, players can now use RoboCop to announce the game’s characters, stages, and post-game screen. However, it is unclear if this is for everyone or just Aftermath owners. You can see it in action here. It’s the in-game store for 1,000 Time Krystals. You can learn more about it here.

Many of the game’s Brutalities have been changed around to require a button input, meaning they won’t end the match automatically if you hit the requirements. Now you have to hold a direction on many of them to trigger the Brutality.

Fortnite gets a Rocket League crossover.
Games 3 months ago

Changes to camels... and other stuff.
Games 3 months ago