At first, when trying Kingston's HyperX Cloud II headset, I was underwhelmed. Now, it's not exactly fair that my comparison for audio headphone systems start with the Astro A40s and end with a pair of production monitor Sennheiser set of cans used for film audio recording. This felt a bit like comparing four- and five-star restaurants to the local mom-and-pop pizzeria; sure you love pizza, but it's not scallops drenched in butter over a bed of sea salt-encrusted greens in some extravagant sauce you can't even pronounce—where each bite feels like you're tasting something from another planet.

My other point of comparison is the Skull Candy $20 in-ear noise cancelling headphones I use out-and-about to listen to music on my iPhone. This is a bit of a more fair comparison, and at first I still wasn't particularly impressed with the Cloud II headphones; they do a great job of covering the ears for noise reduction, fit very comfortably, and have a cloth covered cord for added convenience, but the dynamic range was less than my in-ear pair which produced more of the natural bass in the audio.

A second listen and I was mollified a bit; while it's true the over-ear cans produce less bass when hooked into a mini-jack (my phone, the PS4 controller, etc), they also allow for a more distinct separation of the individual sounds. In my in-ear pair, the sound may have heavier bass, but the audio also tends to bleed together slightly, with it harder to hear individual parts. The Cloud II wins here on clarity, though it doesn't compare to the Astros in that regard.

But the headset, though it can be used with the PS4 or the Xbox One, isn't really designed for a phone or any console; it's designed with a PC or Mac in mind. Specifically, it's meant to be plugged into a small control device (which also contains the onboard sound-card itself, with volume controls on it for mic and game audio) that plugs into a computer through a USB connection, but doesn't work with consoles. As soon I plugged it in, it installed the drivers necessary for the card to work. To hear how well it might run, I started up The Witcher 2, just to see how well the audio mix would work. 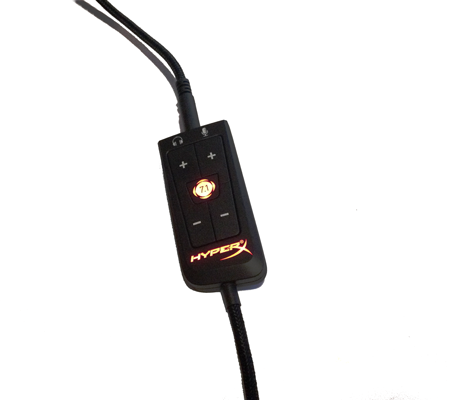 The USB controller which also contains the onboard sound card.

As noted in the supplemental material provided by the manufacturer, this boosts the bass and allows for surround. Pressing the 7.1 button on the control device produces a major upgrade in fidelity and directionality. This neared, but didn't quite match, the quality of the Astro's optical audio output. Designed specifically with laptops in mind, many of which often don't have room for a sound card, it more than makes due for PC or Mac gaming on-the-go with a near professional quality sound system.

To put it mildly, that the headphones can run such clean, solid audio through a USB connection is more than a little awesome and kind of unbelievable. I'm a little bit put off by what feels like false advertising where it claims, alongside its fantastic PC performance, that it can be used for the PS4, Xbox One, mobile and tablets, when its output on these devices is relegated to a stereo signal with a meager bass range. But the computer performance is so strong it's easy to overlook.

In short, the HyperX Cloud II is a good set of stereo headphones with excellent clarity but a low bass range for mobile devices and consoles. It's a fantastic set of 7.1 surround headphones for PC and Mac gaming, especially for machines that do not have the space for a dedicated sound board. At $99.99 it's an excellent value for computer gamers, head and shoulders above a standard pair of headphones, and a solid fit for someone willing to pay for fairly high quality audio, without having to pay separately for both a headset and a quality sound board.

No one can hear you scream.
Games 3 days ago
7

The dynamic.
Tech 1 month ago
9

The condenser.
Tech 1 month ago