The Witcher 3: Wild Hunt Review-in-Progress – The Good, The Bad, and The Ugly

Update: My full review of The WItcher 3: Wild Hunt is now live!

Original: Well, here it is, the most hyped RPG of 2015. The Witcher 3: Wild Hunt has been at the top of "most anticipated" charts for more than two years, and tomorrow it hits store shelves.

I had a chance to invest more than ten hours into The Witcher 3: Wild Hunt this weekend. Yes, review copies were sent out a lot later than we would have liked, but I'm very glad to finally be able to jump into what I anticipated would be a game of the year contender. Sadly, it appears that the PC version still isn't ready for reviewers, so I've been playing the Xbox One version. My GTX 970 isn't happy, but it is what it is.

To put it simply, I'm disappointed in The Witcher 3: Wild Hunt so far, but it has some great qualities. Below I will go over my impressions in a format that splits up what I think are good, bad, and ugly characteristics.

Combat can be exciting. Geralt's sword strikes feel powerful, especially when you decapitate enemies using finishers. His magic is useful with several options at your disposal from the get-go. Also, being able to dodge or side-step adds two options for how you avoid enemy attacks, although they can betray you with inaccuracy in some scenarios.

Equipment variety is strong. There's a healthy amount of armors and weapons to earn, in addition to upgrades. The progression of Geralt's looks and strength is well delivered.

A great day/night cycle. The game not only looks best when the sun is either rising or setting, but being able to experience the massive open world with an always evolving look and feel adds diversity to the experience.

The best in current-gen exploration. The world is varied and a joy to explore. Made better, the side quests are very consistent in quality. This is a game you can absolutely get lost in as you jump from one quest to another.​ 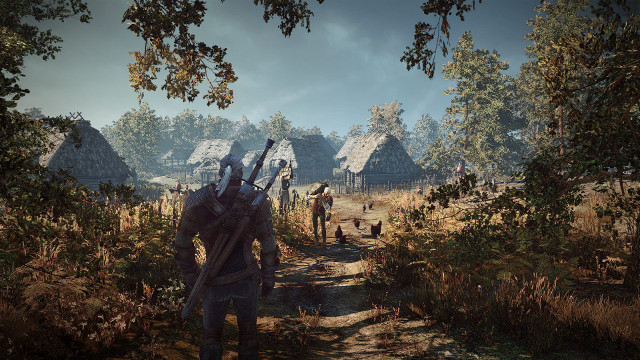 An easy to follow story. The story isn't overbearing, and each time you load up the game it introduces you to the major current focus of the plot with a quick verbal summary supported by hand-drawn art. This is a rare quality for AAA RPGs.

The tutorials are great. All of the game's systems are explained with thorough and helpful tutorials that go out of their way to introduce you to some of the more complex mechanics of the game.

A lovely horse. The horse controls are intuitive. This makes traveling a lot more enjoyable.

This is a massive game. There is ready to believe there really is over 200 hours of content as promised by CD Projekt Red. There are quests to be found everywhere, in addition to secrets you stumble upon along your journey.

Enemies are varied. There are menacing bears, plagued beasts, angry humans, and so much more to spar with.

A sub-par leveling system. You get to level up and spend Ability Points. However, the system doesn't offer enough in the way of variety. The slow speed of leveling means you'll spend a lot of points in upgrades that don't feel substantial.

Combat variety is a problem. No matter how you build your character, you're going to, for the most part, be relying on constant swings, dodges, and the use of one magic ability that you've upgraded. It can get repetitive. 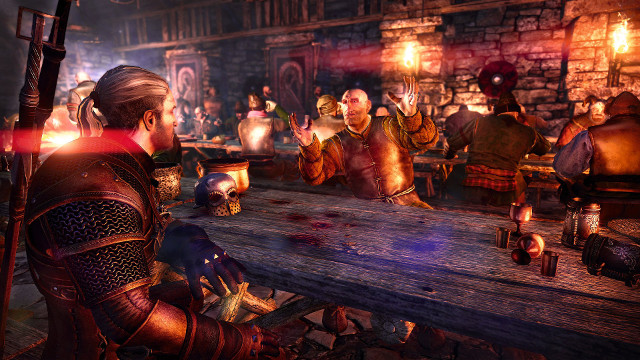 Bugs are frequently encountered. Triggered voice audio overlaps often, quest steps will show as incomplete after being finished sometimes leading to broken quests, Geralt gets stuck on terrain, and more.

Finicky camera movement. The camera doesn't feel quite right, and snaps harshly when it encounters objects at a certain angle. This becomes an issue during the more intense combat encounters.

There are way too many items. By the time you're just five hours in you will have an infinitely cluttered inventory. It makes crafting more convoluted than it needs to be, and inventory management nigh impossible.

Witcher Sense is abused. Far too many quests require you to investigate the environment with Witcher Sense, a mechanic that makes the game look and feel odd. It overstays its welcome.

Traversal is in rough shape. You can jump and climb, but it's awkward. This is no Assassin's Creed, that's for sure.

A victim of harsh downgradation. This game looks nothing like was demonstrated at E3 2013. In many cases it looks like a current-gen launch game. As much as Watch Dogs was a visual let-down, this is the new king of downgradation. Performance is inconsistent, too. 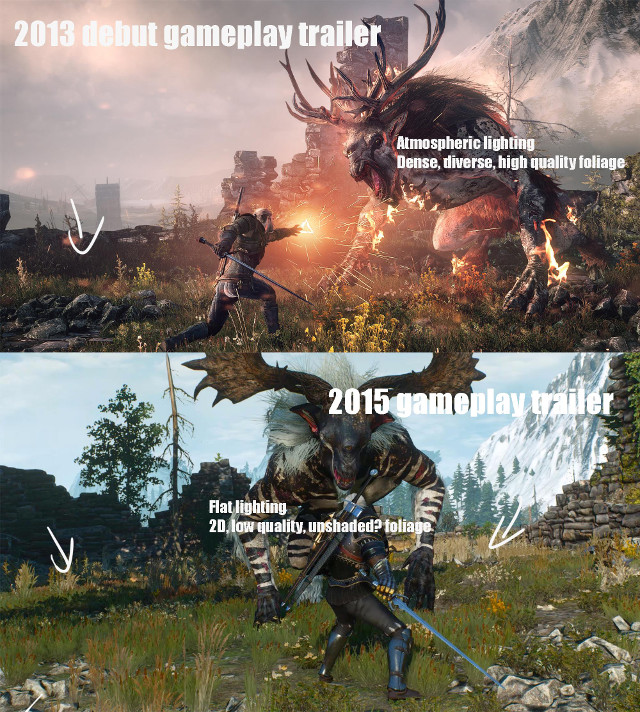 The UI is underdeveloped. Navigating the inventory and character menus can prove frustrating. Also, the text is far too small even on the Large setting making it difficult to read item descriptions.

The PC version may have issues. Just a day before release CD Projekt Red is still not able to produce review copies of the PC version. This might be a bad sign for PC gamers.

Keep in mind that this is based on a pre-release build without the day one patch installed. Tomorrow's update may address several of my concerns. Stay tuned for my full review.

No one can hear you scream.
Games 13 hours ago

Boost is out, Adventure could be in!
News 4 days ago

Fortnite: My Hero Academia Skins Leak Includes All Might, Deku, Ochaco, and Bakugo

They look smashing.
News 1 month ago