Exploring the Massive World of Just Cause 3

Being a huge fan of open-world sandbox games, I couldn't wait to play Just Cause 3. I recall when I first sat down and played the previous installment and experienced the jaw-dropping moments that soon followed. This latest game doesn't disappoint and takes everything in the series to the next level. The Republic of Medici is the centerfold of action in Just Cause 3 and it is absolutely full of activities to partake in and places to explore. As a matter of fact, the world map is over 400 square miles in size and it's rich with islands, towns, cities, mountains and more. I have spent over 34 hours trying to digest as much as I can about Medici and what it has to offer but I've only barely scratched the surface. We're gonna need a tour guide for this one.

Upon completing the introduction missions and getting a feel of the physics, I immediately set out to explore the nearby towns. Each settlement I encountered was overrun by Militants and needed to be Liberated for the citizens of Medici. The process of Liberating can be simple or very complex depending on the size of the location. From my experience, the bigger settlements have more objectives to complete. These objectives can range from taking down billboards, assassinating a key figure, destroying fuel tanks, breaking down statues, taking over police stations, destroying propaganda vans, and much more. 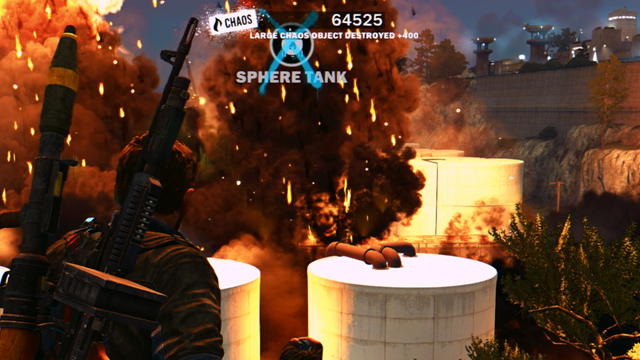 Rico Rodriguez is rewarded for his work with all sorts of new unlocks, including challenges, garages, vehicles, weapons and Chaos Points. The vehicles and weapons I unlocked came in the form of Rebel Drops, which are essentially supply drops that Rico can request with a flare at hand. I also managed to find vehicles on the street and took them to a nearby Garage, which then unlocked them for a Rebel Drop. Each settlement has unique unlockables, so the desire to Liberate never gets old.

Challenge unlocks in Just Cause 3 are one of the most important factors in the game. The more challenges completed, the more gears unlocked. Gears are used to upgrade Rico's current abilities and activate new skills. There are a variety of Challenges that Rico can partake in including land, sea and air races, wingsuit courses, destruction frenzies, shooting galleries and perhaps even more.

Below you can watch a video of me completing the Pirate Tour Wingsuit Course located in the land of Cauda.

Aside from official challenges, Just Cause 3 also has a challenge creator that can be shared between players. One of the most noticeable things while playing is the leaderboard that appears in the upper right-hand corner of the screen. While grappling towards an object or simply falling from a great height the timer starts going up. I became really hooked on beating the high scores set by other players and spent quite a bit of time trying to surpass them. While there isn't much to be gained by becoming first place on the leaderboard, the personal gratification that makes it all worthwhile for competitive types.

In the sped-up video below, I spend over 10 minutes Wingsuiting at a very high altitude and manage to beat the high score that was once set by BRKsBiladeiro, a well-known YouTuber from Brazil.

One of the most exciting things in an open-world game are the small details left behind by developers. In the world of Just Cause 3 there are dozens of neat easter eggs to come upon that are intentionally placed to reward explorers. For example, a towering mountain sits in the Snowy region of Montana and climbing to the top yields an achievement titled "Top of the World" along with a statue depicting a Bull, as seen below. 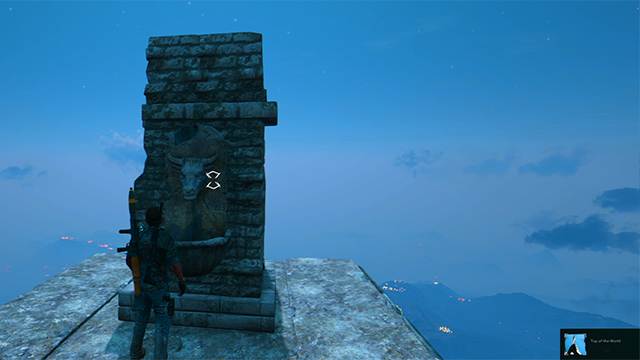 Other areas are pouring with revolutionary themed graffiti and artwork. There are various Billboard advertisements which bring life into the Republic of Medici. Unlike the previous entries in the Just Cause series, the game world is no longer quiet and empty. There are hundreds of pedestrians walking around and chatting with each other. It's normal to hear an ongoing conversation in the background as you're casually grappling to your next destination.

One of my favorite encounters was a Street Performance in the heart of Regno enacted by three pedestrians, each playing a different instrument. Small details like these make me very excited and I can't wait to see what else is out there. Check it out below.

The fun doesn't just stop there. In Just Cause 3 there are hundreds of collectable items placed throughout the Republic of Medici. There are Audio Tapes, Plane Parts, Rebel Shrines, Ancient Tombs, and Daredevil Jumps scattered through various locations. Some of these collectable are labeled as a question mark on the in-game map, making them easier to find, while others are highly elusive. When standing next to a collectable, an icon resembling a signal will appear on the bottom of the screen. Each step taken toward the collectible will increase the signal strength. It's a nice touch. Just Cause 3 has plenty more to offer in terms of content. The folks at Avalanche Studios have done a tremendous job in making the series feel richer than ever, and I think it will quickly become one of the most favored open-world sandbox games in existence. It helps that it's a beautiful game—especially on PC.

Be sure to check out our review of the game next week and stay tuned for more Just Cause 3 coverage. In the meantime, take a look at some cool screenshots below that I took during my adventure.