The Best Indie Games at GaymerX3

At the latest GaymerX convention, GX3, members of the GR staff (myself included) got a chance to attend and speak on panels as well as checkout various indie games. Many games ranging from tabletop, virtual reality, mobile, and console platformers were on display for con-goers to play at the expo hall, with the following games being the most impressive.

Black Ice is Tron meets corporate espionage; which come to think of it, is what original Tron villain Dillinger was using the MCP for. It’s a first-person shooter where you approach buildings in the virtual world and hack them for loot and upgrades. During the hack (of which you can have several going at once), the building will spawn defenders of various types for you to shoot or club to death with your various weapons. You can also earn power-ups which can help you move faster, jump higher, or spawn minions to assist you during battle.

There is serious loot to be earned in each battle, which really adds a Borderlands-like feel to the game as far as volume and variety is concerned. This is also a great game for anyone interested in Let's Plays and live streaming as they clearly state on their Steam store page that no content used for those purposes will be flagged. What makes Black Ice even better is that it is currently available through Steam Early Access for $14.99 and has up to 10 player multiplayer with PvE and PvP modes.

Winner of the GX3 Best Indie Game Award, Burgal's Bounty is a unique game especially in the sense that it's primarily a mobile puzzle game. Unlike the typical match-three games and many other simplistic puzzle-based games available on various portable devices, Burgal's Bounty requires far more than color recognition and quick reflexes to play.

The game requires you to guide a burglar through a set of obstacles using a limited number of tools and directional options to collect various coins and money bags through each level. Find all the money bags, you win and move on to the next level. Each level starts off by presenting the player with a set of obstacles standing between them and, well, their bounty. You are allowed to place various directional arrows throughout each level at your own speed as there is no set time limit for the planning of the initial thievery.

The difficulty of the level also determines the amount of arrows available to you and whether or not you are given bombs to help destroy cracked walls and purple arrows that can prevent you from stealing money bags. Once you’ve placed all of your arrows you press play, choose your starting direction, and see whether the strategy you setup will lead to you getting the entire bounty. Although the game is still in its development stages, the art style is solid and there are currently around 90 different level variations all made by the game's lead programmer and artist, Blair Pyle. When it finally launches it will be available initially on iOS devices and Android devices soon after.

Fragments of Him (Sassybot Studio)

Conceived as a game jam with his students, Professor Mata Haggis of NHTV University’s game Fragments of Him is an abstract expression of loss and grief in the wake of a person’s death. You experience the last moments of protagonist Will’s life, visualized in muted greys and browns, and the reflections of those who loved him, getting multiple perspectives on a person’s impact on the world. The playable prototype is still up on Kongregate if you want to try it for yourself.

As a narrative experience, Fragments of Him has a small degree of narrative choice, which is reflected by what the characters think and do as they move through the world, reflecting on the loss of life. What it brings to the table is a gorgeous sense of loss and grief through visual spareness and color choices, as well as meticulous writing to convey the sense of the personal effect a person’s death has on those around them. It was awarded 2nd place in the GX3 Indie Game Competition.

Another visually abstract game, Shard is a co-operative platformer created by former Harmonix developers (so in addition to the solidly forming gameplay, it also has great sound) where you play as humanoids made up of colorful shards. As you make your way through each level you’ll find new shards, changing the color palette of your character. You can also dig through the ground to get under obstacles or build up a mound behind you to reach higher areas. Shard is still in development and little is known about the story mode so far, but it has the potential to be a great co-op platformer. 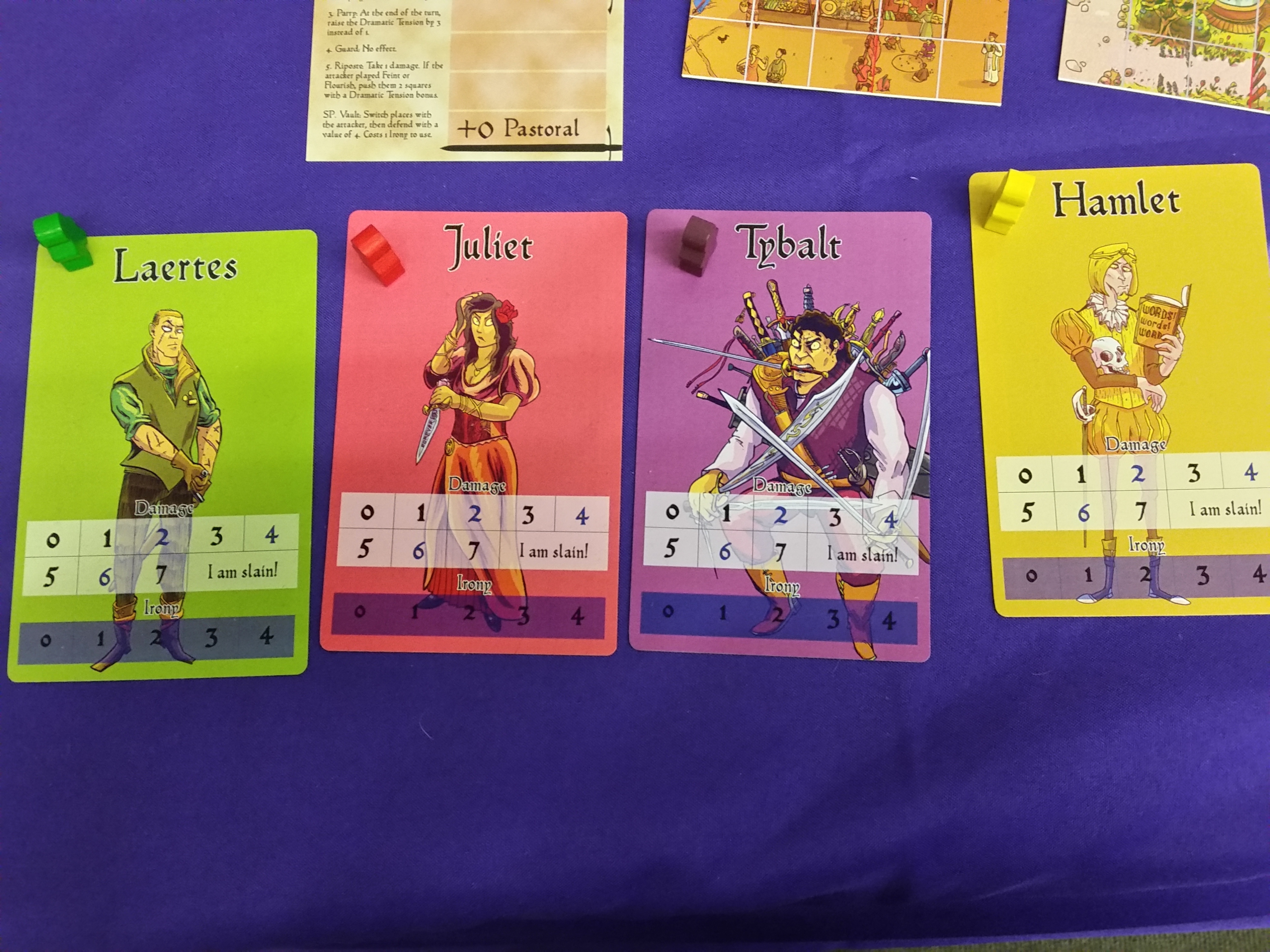 Having discovered a fondness for tabletop games over the past year (thanks to GR's Nick Tan), I was happy to see them included in the GX3 Expo Hall. Happy Daggers draws its influence from William Shakespeare, primarily Hamlet, with two players going head to head in a duel to the death. The art is done by Ian Jay, and although it only consists of four characters and four unique stages, it is damn good. I already have a favorite character, Tybalt, a Shakespearean '80s-era Michael Jackson-like character with a ridiculous number of swords, including one he holds in his teeth.

The game is played by drawing a series of attack and defense cards measured on a scale of “Dramatic Tension” ranging from Palpable and Tragical, to Historical, Comical, and Pastoral. You deal damage only after you have backed your enemy into a corner cutting off their retreat. If you are into English Literature and appreciate a good dose of sarcasm mixed in with the works of one of the most iconic playwrights to ever live, then you will love this game. It is available for $34.99 through gamecrafter.com. 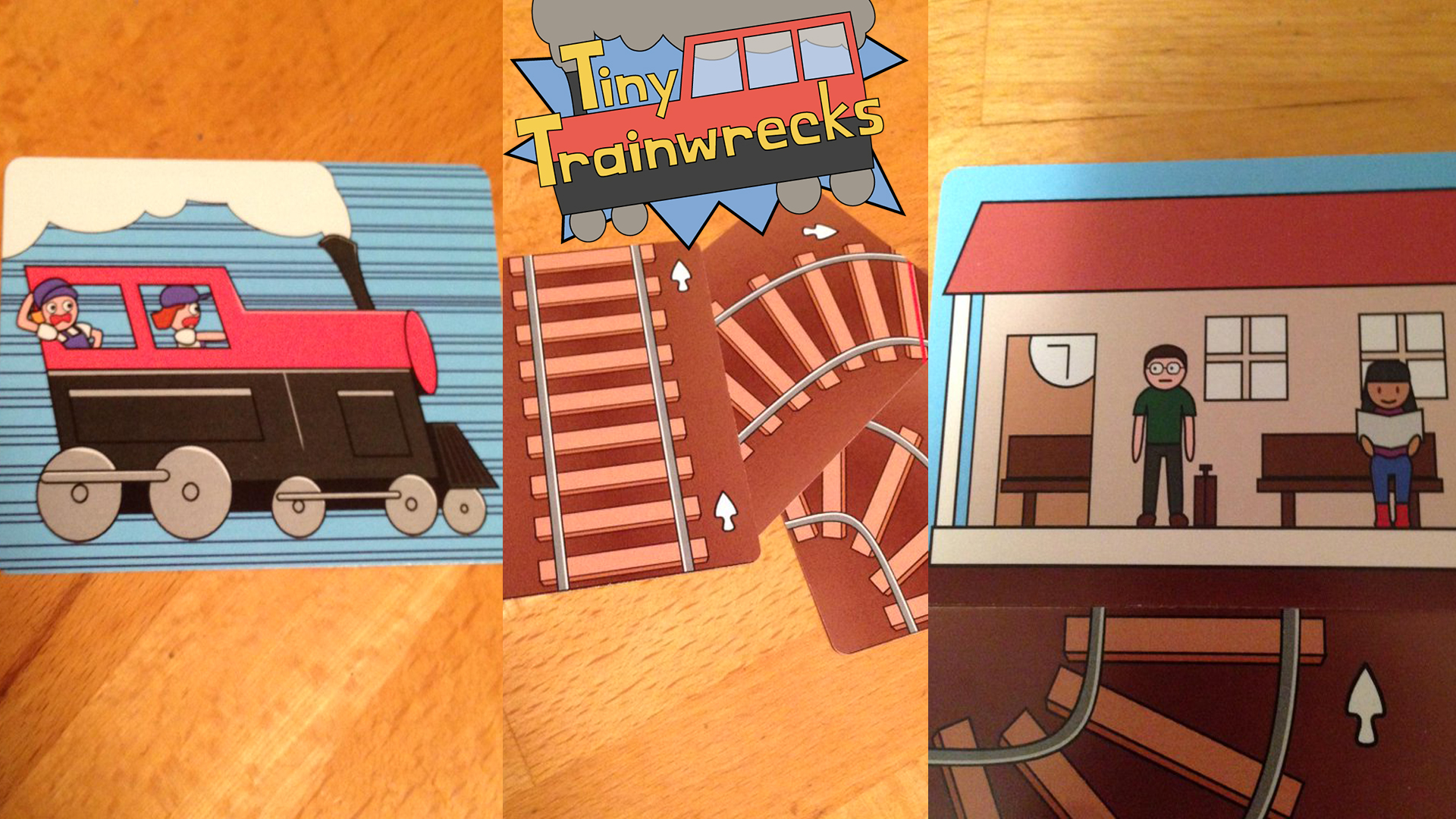 What makes Tiny Trainwrecks an interesting tabletop experience is that it involves the players in its design. Before you begin playing, you can create obstacles on whatever surface you are using, allowing you to use whatever everyday objects you have on hand during the game. Create roadblocks or cups or stack some books in order to make a train tunnel—the choice is yours. The main goal of the game is to make it from the beginning of the game to the station. You do this by drawing tiles from the deck. If a tile you draw diverts you into one of the obstacles along your track, you lose the game. It plays a bit like Exploding Kittens in the sense that your progress through the game relies primarily on the luck of the draw. It is currently available on drivethrucards.com for $6.99.

This was by far the best cellphone VR game I’ve played. Developed for GearVR (Samsung/Oculus’ mobile VR solution), you play as a person on a magic carpet negotiating a maze. You pick paths, grab items, weapons, and coins, all by looking at objectives with a timed mechanic that stands in for button presses. The bright colors and simple design keep the world storybook-like and accessible to everyone, and certain puzzles have an almost adventure game-like quality to them.

Nevermind has evolved a lot since the last time I got the chance to preview it. There are now more levels to explore and polished introduction scenes with re-dubbed voice over. This is a game that anyone interested in first-person adventure games will enjoy. While having a biofeedback device is not mandatory to play this game, it is something I highly recommend. When these features are enabled the game reacts to how anxious you are while playing it, adapting to you as you progress through each area. Any laptop with built-in RealSense 3D technology can utilize the biofeedback features of the game relatively easily. There are also other sensors available that work with the game and you can check out the guide to see which one might work best for you. If you are interested in checking out the game, here it is on Steam.

Thank You, Xbox Game Pass, for Still Being the Best Deal in Gaming

I've saved so much money.
Originals 2 months ago