Rebellion has a signature style. The studio makes titles sits between the giant AAA blockbusters and the indie games that proliferate digital marketplaces. Mid-tier sounds harsh, but it’s a badge of pride at a time where bad games and even worse business practices have sunk other developers in that same league. Its position in the industry comes out in its games that are usually decent distractions that can easily suck away a few weekends. Zombie Army 4 looks like it’ll be the next in line with Rebellion’s legacy, offering a co-op-focused experience or a podcast game for you to grind away on.

That’s not a pejorative, especially if the core is solid. Zombie Army 4’s gunplay is comparable with other third-person shooter games from the studio as the controls are familiar but tight and built for mowing down hordes. Because of its controls, blasting hordes of Nazi zombies is, well, mostly a blast but the parts around those solid fundamentals are how it seems to avoid being another boring shooter. 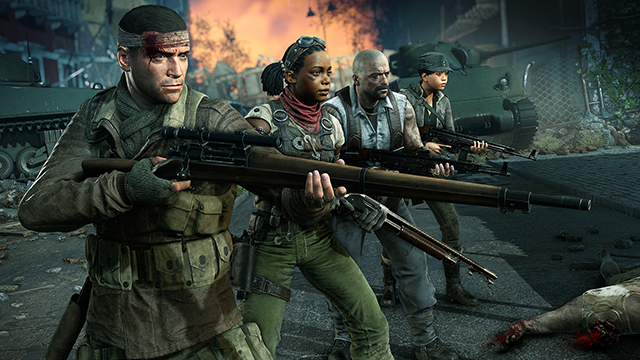 Cooperative multiplayer is the feature that elevates the game because of how it more naturally fits the manic, horde-shooting gameplay. Up to four players can team up and take down scores of zombies as they pour into the game’s many arenas, be it the campaign or Horde Mode.

Aside from communicating about who gets what supplies and dropping them to those in need, it doesn’t seem to have much in the way of co-op-specific actions. However, it is a clear example of how most games benefit when played with other people, granted you don’t purposely trigger traps and kill your teammates.

And the community has made this quite clear to the longstanding developer. Head of Creative at Rebellion Tim Jones stated that although their players have asked for games like this, the team has organically moved in that direction anyway.

“It’s something we’ve gravitated towards quite instinctively,” said Jones. “And we found that our players obviously really appreciate it. There’s just a joy of playing together and having a common enemy and being able to help each other along. It’s a market that feels underserved in games, which is a shame but good for us since we are making them.” 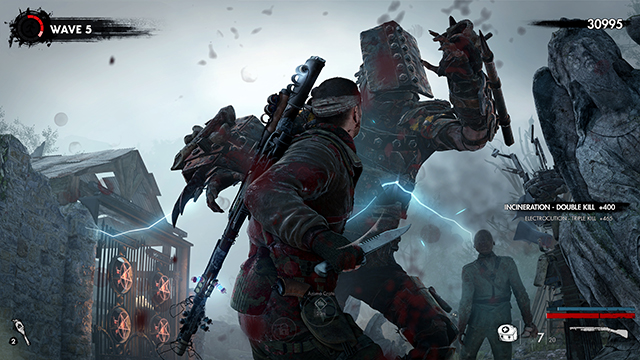 Rebellion does indeed make these kinds of games, which is evident to how much Zombie Army 4 looks like 2018’s Strange Brigade. However, instead of raiding tombs and plundering temples, players are dropped into a world similar to 2018’s underappreciated Overlord, a film that Rebellion even watched together in the theater when developing this game. Environments range from dirty, broken down Nazi labs to arcane castles that might not be filled with color or look quite up to 2020 standards, but fit the tone nonetheless.

But while its art style differs from its Mid-Atlantic accented brethren, the two play similarly to each other. The previously mentioned shooting mechanics are essentially the same yet Zombie Army 4 differentiates itself by going a bit deeper into the RPG hole. Players can more heavily customize their avatar by equipping different melee attacks, perks, and weapons with even more depth when considering weapon upgrades.

Most of these appear to be earned through upgrade kits or leveling up and both point out how seriously the game seems to take its progression. It is designed to get you to play to earn more so you can play and earn more; the primal cycle that has permeated throughout many genres over the years. While it is yet to be determined how grindy these rewards will be, they do at least give you control over your character and let you tailor them to your playstyle.

Aside from the expanded customization, Zombie Army 4 does go beyond the systems found in Strange Brigade. A new multiplier builds as you rack up kills, giving you access to a special attack once you hit a certain threshold. Keeping up that multiplier adds an appreciated meta-game to mowing down as many zombies as you can and there are even birds and rats that can keep up your combo between firefights. 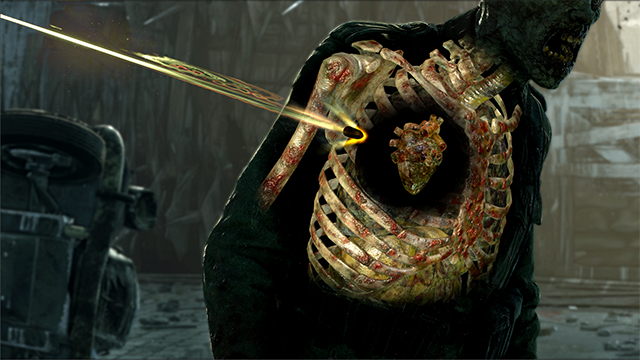 Strange Brigade also had a profound effect on Zombie Army 4’s tone. Previously, Rebellion’s titles were relatively serious, as Sniper Elite, Battlezone, and Aliens Vs. Predator were more gritty than goofy. Strange Brigade’s lighthearted, Indiana Jones-esque vibe gave the studio a break from that style and let them room to tap into the more pulpy sides of zombie fiction, as shown in the zombified shark players can sick on the enemy as well as the collectible zombie hands that dance or do tricks around the levels.

“I certainly remember working on Strange Brigade and a lot of games prior to that were serious in tone but Strange Brigade was an opportunity for us to embrace the goofy,” said Jones. “It was the whole part of the point and really refreshing for us and it was exciting to see how well received it was. It gave us license to explore some of the more goofy gameplay elements of Zombie Army 4 that we might not have otherwise done.”

This is partly made easier by the shared engine, as Lead Level Designer Jordan Woodward explained. Taking bits and pieces from one title can easily translate to another, like the slow motion gory kills that happen when you nail a particularly hot shot; something Sniper Elite fans will undoubtedly recognize.

It’s familiar yet still an effective way to sell the game’s shooting and the game’s technology allows for that synergy that can easily work in another game. The simplicity of sharing systems was also how Rebellion was able to build on the aforementioned RPG mechanics of Strange Brigade. There’s potential for these games to feel too similarly to one another and, given how they already aren’t truly unique in any one way, that could be dampen the experience. It’s up to the full game to have a better loop to make players forget that they are visiting an echo of a past game with a different wallpaper. 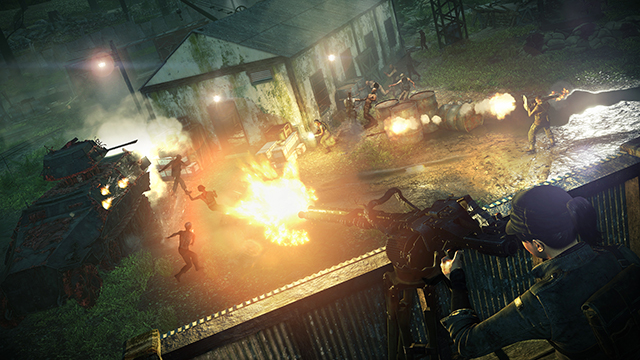 Regardless of changes, these types games have an audience, one that Rebellion said grows with each title it releases. These budget-priced, co-op games fill a niche and have given the team an underdog title, something that Woodward said that he appreciates. While other studios may be pressured to make The Ultimate Co-Op Game™ with a ton of Content™ and microtransactions, Rebellion is still independent and makes what it wants to because it has the freedom. Woodward said he loves this freedom and how it works for the developer and its overall culture where almost everyone has a say.

That attitude comes across in the game. Be it the traditional campaign that funnels you from kill zone to kill zone to its Horde Mode that’s mostly what you think it is, Zombie Army 4: Dead War is a co-op-ass co-op game. It knows what it wants to be and seems like comfort food that will probably satisfy those looking for some undead snacks to enjoy with some friends or while listening to a podcast. It’s a fitting match, given the studio’s independence and how that independence is also present in a lot of the zombie media this game borrows from and pays homage to. But Jones was more convinced that it was a coincidence, if anything.

“It’s sort of on purpose but it’s kind of what just comes out,” said Jones. “It’s not really something you can play for. You are what you are. We’re just making the best games we can in the way we happen to make them. And we are excited that we get increasing numbers of millions of people wanting to play our games. That’s OK, right?”

There’s just about a month left to see if it will indeed be OK. And after playing a few hours, that seems, for better or worse, about right.

Team Ninja‘s upcoming title Wo Long: Fallen Dynasty has received a rating from the ESRB, while also confirming that in-game…
News 4 weeks ago