What if things had gone differently? What if the Cuban Missile Crisis or the
menace of the Iron Curtain had escalated to the point of massive worldwide nuclear
deployment? Why then, we’d be living in an apocalyptic age, driving our artillery-loaded
super cars throughout the vast deserts of New North America. My name would be
Hugo, and at my side would be some hottie named Bunny, known throughout the
land for her beauty and deadly aim. We’d drive around, slaughter a few bad guys,
watch the sun set in the yellow sky, and then spend the evening listening to
The Beatle (Previously ‘The Beatles’; they all survived, but got mutated into
one hideous freak). Cursed fallout radiation! And they don’t sound as good anymore
either! Damn you Yoko!

Thankfully,
there was no worldwide nuclear fiasco, and we live in an age where we play video
games instead of actually driving missile cars (at least for the people who
can separate reality from video games). Vigilante 8 promises and comes
through with that amageddonous driving combat trapped in the 70’s. It has everything
you’d expect… well everything but Bunny. Damn.

The graphics look good, but to have truly shined, the game just needs to be
sharper. It does look a bit better with the expansion pack, though. Frame rate
stays high throughout, even during the multiplayer sessions. Each of the stages
has their own pretty little graphical effects. Snow in Colorado, rain at the
Hoover Dam. But the effect in Las Vegas is a different story — the lame multiple
light sources that glare all over the screen are more blinding than dazzling.

Overall, the stages are a hearty good mix. Some are more expansive than others,
but there’s always plenty of things to blow up. Buildings, bridges, blimps–
you can destroy practically anything! Woo-hoo!

There are 4 heroes (Vigilantes) and 4 bad guys (Coyotes) available. There’s
the standard mixture of personalities, filled with 70’s clichés coordinated
with an appropriate 70’s automobile. Each of them has some story, but no one
really cares. If you play hard enough, you can unlock 2 more Vigilantes, 2 more
Coyotes, and an Alien (the Alien has access to the best vehicle: a fully loaded
UFO). 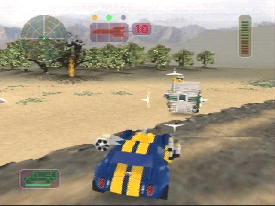 Music,
like most Nintendo games, is your standard MIDI letdown. Most of the music tries
to have a seventies flair (if such a thing exists), and just comes out wrong.
MIDI’s just aren’t as good as the PlayStation’s recorded music. The voices are
especially annoying, but thankfully, there aren’t that many to begin with. One
of the benefits of the cartridge is less space for annoying voices.

The control is finely tuned. It takes a bit to get used to, but once you have
the hang, its easy to whip out those wild 180 degree turns (no reality based
physics model here). The weapons are easy to use and very satisfying. The gameplay
is easily the best part of Vigilante 8.

There are several modes of play, ranging from Quest to Arcade. In each of the
stages, there’s some objective to complete. You can keep going without completing
the objective, but you lose points. Even with objectives, there isn’t much depth,
just carnage and explosions.

In the multiplayer environments, it is often way too hard to see what’s happening
with the screen divided into quarters. At least when you play two players, you
can select between a horizontal or a vertical playing screen.

I also found problem spots in the hit detection. Sometimes, you can drive through
another car. Other times, I saw a car poking through the wall of a building.
Objects (bridges, buildings) can get in the way of the camera, covering your
view. Since these same problems were in the PlayStation version of the game,
they should’ve been fixed in this version.

Vigilante 8 follows directly in the skid marks of the first two Twisted
Metals and Interstate ’76 for
the PC. It may be tons of fun, but is suffers the same problems as the PlayStation
version, lousier music, and nothing new has been added to the genre. However,
for those of you waiting for car combat on the N64, Vigilante 8 is the
best way to get there… actually, it’s the only way considering the shortage
of games.

No one can hear you scream.
Games 23 hours ago
6