It’s tough getting blood stains out of a halo.

One trend that runs clear through almost all of Judeo/Christian Biblical mythology is that the evil bastards always get smitten by the Lord and an army of believers, who chop up the pagans, bathe in a little blood, have an enjoyable week, and eventually go to heaven. This sort of ultra-violence permeates much of computer games as well. Since Biblical mythology is fantastically epic and involves cool, evil-looking gothic cathedrals and the like, a computer game wouldn’t seem entirely amiss, would it?

Requiem: Avenging Angel casts you as Malachi, a mohawk-styling angel sent down to Earth in the 21st century to do battle with demons, fallen angels, and all the humans and robots they control. You basically run around, shoot, talk to your human compatriots, use your divine powers, and kill a lot of people. It sort of makes you feel like Christopher Walken in the movie “The Prophecy.” Oh, in case you didn’t catch on… Requiem is a first person shooter.

The plot is quite heavenly. Angels fall to Earth and do very bad things. Mankind builds colony space ship. Fallen Angels seize control and pack lots of people into the ship in order to make them into demons. No one knows this on Earth. God sends Malachi to deal with all this. Malachi has to meet up with the human resistance. Malachi must do odd jobs for them. Malachi must kill a lot of things. The rest I will not spoil.

To help expedite the mayhem and destruction, Requiem supplies you with both secular weapons and angelic powers. The secular weapons are basically just the old favorites: pistol, machinegun, shotgun, grenade launcher, rocket launcher, sniper rifle, and railgun. They are completely unoriginal, but carry a very satisfying punch and meaty sound, making them very fine to use liberally.

The Angelic powers are far more interesting. There are attack powers like Brimstone (fireball), Locusts, and the wicked To Salt (very cool, turns enemies into pillars of salt that disintegrate). There are also movement powers like Fly and Haste. Then there are the ‘Bound Powers,’ such as Heal, Insist, Posses, Resurrect, etc.

For the most part, the Angelic powers are much like the Force powers of Jedi
Knight, but with some very cool exceptions. My personal favorite is the
Warp Time power, which slows time to about one quarter speed while still allowing
you to move normally. The effect is a very cool slow-motion gunfight that’ll
spank the proverbial monkey of anyone who enjoyed watching the hail-of-bullets
action scenes in “The Matrix.” The Angelic powers do a lot for the game, which
is otherwise somewhat bland.

To add to the fun, you can shoot off extremities while your opponents scream in peril, fly back through the air from the bullet impacts, and die brutally (the excellent sound really works well here). You must be careful with the ammo, however, as death animations take a long time to play out and it is easy to shoot an enemy up with 4 times as many rounds as necessary. 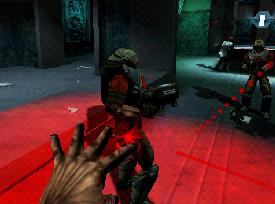 The levels in Requiem work much
in the same way as Half-Life.
There is a slight loading pause every so often and you may have to retrace your
steps between areas. However, the game is much more linear than Half-Life
and very little backtracking is ever required or permitted, what with doors
locking and so forth. The levels mostly have a techno-industrial feel to them,
similar in style to the older MTV-esque game ZPC.
The problem here is that the levels feel sterile and non-interactive. There
is very little furniture or other ‘fleshing out’ structures. Bullets leave no
pocket marks. There are no exploding barrels or destructible boxes. Glass breaks,
but that is about it. The levels work well from a pure action perspective, but
do a very barely passable job of putting you into a distinct, plausible place,
something that many recent games like Half-Life, Shogo,
and Blood
2 did very well.

Fortunately, the levels are set up so that the enemy encounters are frequent, hot and heavy. Many times you’ll come into a room with a few enemies in it, tango for a bit, leave the bodies behind, walk down a hallway, and get shot by both the guard at the end of the hallway and the one that just outflanked you. Both creative enemy placement and fairly good enemy AI make for very intense action. My advice it to use Warp Time often.

Integrated into the levels are conversations with characters. This basically consists of them talking and you hitting the ‘action’ key to initiate a response. Although little cinematic touches like this are good, the level of implementation here is no way near as advanced as in Half-Life or Kingpin (the demo) and it all feels a little insubstantial.

Requiem uses a proprietary graphics engine that is roughly just above the Lithtech engine in terms of graphic splendor. Colored lighting effects are done well, textures are good, character animation is very smooth, and the overall graphical feel is solid. However, the sterility of the levels really holds back the graphical potential.
Further, Requiem seems content with an almost Quake level of low interactivity. One good thing about the minimalist approach is that Requiem runs well on just about anything (starting at a Pentium 133 with a Voodoo card). D3D is supported, but to enjoy it you need a patch.

Requiem is a good, solid, traditional 3D shooter with a interesting premise that has never quite been done before. The low system requirements and good action make it a fun, if somewhat short diversion for those not on the cutting edge of technology. For everyone else, it’s a good way to pass the time until Aliens vs. Predator, Descent 3, and Duke Nukem: Forever come out. Unfortunately, Requiem doesn’t really do anything revolutionary at a core gameplay level, aside from a few really cool angelic powers. The twisted Biblical premise just isn’t quite enough to qualify (though killing the pagans is a blast).

Guides Somewhat sterile Not a lot new here
8 months ago