“Hang On To Your Helmet!" Review

“Hang On To Your Helmet!"

Uh, sure. Problem is if you do that then you can’t play this game, and I say
god damn! That would be a pity. In fact I say that would be tragic! I’ll cut
to the chase, Redline Racer is the best GP Motorcycle racing game yet
made.

Now calm
down all you MotoRacer fanatics out there. I mean you no harm and you
have nothing to fear from me. In fact, I am indeed one of you. But what we have
here in Redline Racer is the most fun, the best graphics, the best physics,
the best frame-rate, and some of the best tracks ever constructed for a game
celebrating the fine art of racing two wheeled automobiles at psychotically
insane breakneck speeds. Whew.

The game offers you two racing modes, Arcade and TimeTrial. In Arcade you start
out with 3 tracks and should you beat all the tracks on all available difficulty
levels (Hard is not available until the latter tracks), then you are awarded
more bikes and tracks until the grand total is 10 tracks and 8 bikes. TimeTrial
is basically just practice. Multiplayer for up to 16 players is supported in
IPX, TCP/IP, direct modem, and serial protocols.

The track design is well done with plenty of twists, turns, and jumps dropped
in to keep you on your toes. There are 6 types of track, Arizona Desert, Beach,
English Countryside, Mountain, Raceway, and City (two tracks for all types except
for Raceway and City). Each track has its own spin on its textureset. In a very
cool nod to detail, all the tracks’ surfaces feel different to race on.The designers
also threw in lots of nice little gimmicks like helicopters, trains, and crashing
waves.

Control is dead-on with a keyboard, joystick, or gamepad. The precise control
and the well designed tracks lend a terrific feel to the game, there is no fuzzy
barrier between you and your race. Its crisp and right there in front of you
to be exploited, if you got the skills. The skills. That’s a thing.

This game is Hard. Crashing is easy, the other racers are good, and
the tracks are tricky. To beat a race in ‘easy’ mode you need to be able to
stay on your bike and hit the checkpoints in time. In ‘medium’ you need to be
able to race the track fast and exploit it wherever possible for a few extra
milliseconds. On ‘hard’ you need all of the above, the concentration of an Olympic
downhill racer, and an act of god on your side.

The best, and most noteworthy thing about Redline Racer is it’s physics
model. Herein is no simple arcade bang-your-motorycycle-into-a-spikey-wall-and-keep-on-treckin’
gameplay. You hit something, and you fly, flip, crash, or a combination of all
the above. This has both a good angle and bad to it.

First off, the good side: If you go over anything slanted, at the proper speed,
your fly, gracefully into the air in some of the coolest automotive jumps in
all of PC Gaming. The bad side: You almost always crash and watch your bike
flip over in accurately modeled directions as your corpse goes sailing off into
the sunset. To be concise, in this game you cannot complete a race without crashing
if you keep your middle finger planted firmly on the accelerator.

If you land a jump or narrowly avert a crash by riding on a slanted wall, its
possibly the coolest thing in all of PC racing, it makes you feel good about
yourself. The other feel-good aspect is that if you get good at Redline Racer
and get to the point were you can beat all the races, do all the possible jumps,
hit all the slanted walls, and live… you feel really good about yourself.
The satisfaction element of this game is really drastic.

Essentially what we have here is a very slick blending of arcade racing and
realistic physics that, unlike other schizophrenic attempts at this sort of
game, actually works. 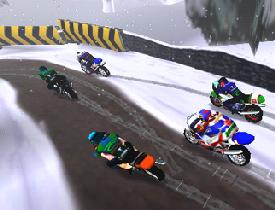 The graphics
in Redline Racer are second only to perhaps Ultimate Race Pro.
The textures are detailed, the animation is smooth as silk, there are lots of
nice little graphical special effects like sparks, smoke, particle effects,
rain, fog, snow, lens flares and headlights. Best of all, the framerates are
sky-high.

Wait a sec, I hear you shriek, good graphics and high framerates?! Well, yes
campers, I was leaving out something. This game requires at least a 4mb 3D accelerator
card based on either the 3DFX Voodoo 1 or 2, ATI Rage Pro, Pernedida, Intel
i740, Riva 128, Number Nine, or Matrox G200 chipsets. The upside is that even
with a P133 and a voodoo1, the game screams along just fine with just a slight
downward tweak to the graphics.

Most accelerators are supported so the game doesn’t leave many out in the cold.
And hey, by now who the hell doesn’t have a 3D accelerator and plays PC Games?
Probably only strategy nuts. *shiver*

The only real annoyances present in the game are the checkpoint timer and
the lack of a cockpit view. The checkpoint timer is one of those things that
really should not exist in a PC racing game, as checkpoint timers were originally
designed to make people insert ever more sticky quarters into the racing arcades.

The big problem with the game is the lack of a cockpit view. In all racing
games, especially motorcycle racing games, the cockpit view has always lent
the most visceral feel-the-wind-on-your-face-and-pick-the-bugs-from-your-teeth
feel to-a racing game. Its absence here is a disappointment. With the graphics
already so nicely done, it’s a shame that the game should deny you the one vantage
point from which you can enjoy them the most. The closest thing in the game
to a cockpit view is the bumper view. However, as is the nature of a bumper
view, it makes you feel like a teenager lying on a skateboard rolling down a
hill.

Oh, and there are a few minor clipping problems. Minor ones; this ain’t Tomb
Raider.

Overall, this is one damn fine racer. It manages to get just about everything
right about GP motorcycle racing: the feel, the control, the physics, the superlative
graphics. The only real disappointment is the lack of an in-cockpit view. Aside
from that, this is the most fun I’ve had racing since MotoRacer hit the
shelves last year. Redline Racer sets a new high-water mark for motorcycle
racing games and it is going to be something to see which upcoming games (MotoRacer
2) raise the bar, or sink to the bottom.

No one can hear you scream.
Games 10 hours ago
6