The guy’s getting old, but his game isn’t. Review

The guy’s getting old, but his game isn’t.

Aside from major system changes (like we had last year with the PS2), it can be
difficult not repeating yourself over and over again when trying to review a sports
series. Often the differences are subtle and really only appeal to the hardcore
fan, who probably would have bought the game anyway.

In the case of Madden 2002, the gridiron giant manages to expand upon
its predecessor with more tweaks than simply updated
rosters. The result is a game worthy of any PS2 library and yet another feather
in EA Sports’ enormously decorated cap.

By now, you should know the drill. Featuring all 32 teams (including the new
Houston Texans), Madden busts out with a slew of game modes, including
staples like Exhibition, Full Season, Quick Play and the uber-popular Franchise
Mode, which can track up to 30 years worth of game data. Hope you have a lot
beer in the fridge.

New to this year’s version is a Training mode. Here Big John leads you through
different formations and a collection of plays, pointing out blocking assignments
and passing routes. It’s probably the best use of Madden’s voice in recent memory,
and it actually comes in handy.

Another new mode is the Two-Minute Drill, in which you play as a perpetual
offense and must score as many points as possible in two minutes. Points are
acquired by completing plays or scoring TD’s and field goals. It’s sort of an
arcade style diversion from the meat and potatoes and offers decent if limited
fun.

Working out the kinks in the offense before leaping into a Season is a smart idea, because the AI is tough as nails. Pass coverage has been upped significantly, though it still sometimes feels a little arbitrary. On the higher difficulty settings, needling a pass through the secondary is like cramming an oyster into a coin slot.

But playing defense can also be an aggravating experience, due mainly to the AI’s inability to consistently go after the guy with the ball. Time and again you’ll watch as the running back starts hauling ass upfield, only to be surrounded by two linebackers, a safety and a cornerback. But rather than pray for mercy before being smashed by all four, the RB simply takes two steps to the left and only one of the defensive backs even goes for a tackle. The other three just sort of sit there staring at the play. It gets incredibly irritating, though it can be resolved by taking firmer control over the effort (ie. try to manually tackle everyone).

Part of the difficulty in this stems from the somewhat loose control. Compared
to the Dreamcast’s NFL 2K games,
players don’t cut sharply and you’ll often find yourself making wide circling
patterns just trying to turn a corner. Tackling is still awkward, as players
don’t really leap so much as trip and fall. The moves are all there and the
tried-and-true Madden passing schemes are fine, but things don’t feel
responsive enough. 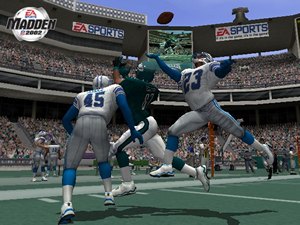 On
the other hand, they sure LOOK responsive enough. Madden 2002 actually
ups the graphical flair and intricate detail found in last year’s beauty. Player
faces are much more expressive and actually resemble the real people. The number
of animations has increased significantly, leading to some eerily realistic
moments. Watch in awe as your HB barrels through three defenders. One falls
back and sprawls along the turf, another grabs the HB around the shoulders,
and the third gets kicked by the first guy and loses his legs, undercut by his
own teammate and resulting in a pileup. If you squint, it looks like you’re
watching TV.

It doesn’t sound like it, though, unless you have Tivo and like to listen to the same thing over and over again. Madden’s commentary makes a comeback, this time new and improved (with a fresher scent) and yes, even dumber than ever. While player-specific insights are fine and dandy, his redundant color commentary constantly reminds you that you’re playing a video game.

But that’s really small fries in a Super Size meal. Madden games are
all about depth and realism, and this version is no exception. You can Create
a custom team, complete with custom helmets and uniforms. Madden Cards are back
and can be earned in any mode, including the new Training and Two-Minute Drill.
Just about every setting under the sun can be tweaked, including AI aggressiveness.
There’s a lot of engine under this hood.

Heck, they even added the recent Coaches option to ‘Challenge’ calls. While it doesn’t come up very often, it’s a fantastic little addition and marks one of the first times I can think of when you could argue with the computer in a sports game…and win.

For instance, I once watched an opposing receiver snag a pass right by the sidelines, then delicately toe the line and stumble ten yards into the end zone for a TD. When they showed the obligatory replay, I noticed that his foot seemed to step on the line. I challenged the play, watched the ref go over to a fancy shmacy camera, giggled as they brought up the replay once again and zoomed in to the very spot where the infraction occurred…and cheered when they actually reversed their own call, spotting the ball back on the 8 yard line or something. Sure, the CPU scored on the very next play – but it’s the principal, right?

When you boil it all down, Madden 2002 encompasses just about everything
a pigskin fan could want in a football game, from the outstanding presentation
to the solid mechanics. Though it isn’t perfect, it’s very good, and is easily
recommended. 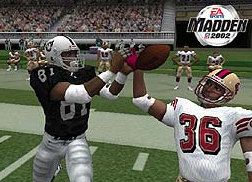