This ain’t your grandmother’s motor-bike-jet-ski! Review

This ain’t your grandmother’s motor-bike-jet-ski!

I have always loved the Jet
Moto series. I love it for its off-beat approach to racing, it’s insane
speed and its ridiculously brutal tracks. Is it difficult, and are many tracks
in it hard-to-follow? Damn straight. But that’s what makes the series so insanely
fun. It’s non-sim racing that actually has a learning curve, but doesn’t concern
itself with frivolous details such as realism.

The third incarnation in the series, aptly titled Jet Moto 3, takes
the insanity and fun of the two previous titles and pumps the action up with
a brand new gameplay engine, better graphics, and speed that would make ‘Xtreme
Sports’ athletes scream for their mommies.

Since the last Jet Moto
came out, 989 Studios has taken the reigns for several large Playstation franchises.
This has led to some monumental disasters (namely Twisted
Metal 3 and 3Xtreme), but with this single release, 989 has nearly
redeemed itself.

To begin with, the graphics are a vast improvement over the grainy, somewhat
choppy visuals of Jet Moto and Jet
Moto 2. The frame rate has increased significantly, with scenery flashing
by and no slowdown in sight (even when a pack of racers are around your character).
The sheer speed and smoothness makes the previous titles feel almost unplayable.
Other graphical enhancements include much more textured racing environments
and a new, brilliant color scheme.

However, once you stop cruising at deadly speeds and begin to look around the tracks, you’ll notice some rough graphical details. For instance, waves look like cubes collapsing in on themselves, and in tracks with great detail, excessive fog is often used to hide pop-up. Perhaps the most noticeable weakness in the graphics is the racer animation and detail. Their presence just isn’t as pronounced as in other Jet Motos, and they are far too small. Still, these annoyances diminish in light of the blazing framerate, and will probably not be apparent at most speeds.

On top of great graphics, the game has fantastic gameplay tweaks. Far beyond a simple increase in speed, Jet Moto 3‘s gameplay is upped a notch with better design features that smooth out much of the cheapness found in earlier installments.

The number of opponents in each race has been lowered, from 8 per race to 6. This makes being knocked off your bike because someone smashed into you going the opposite direction much less frequent.

The tracks are also better designed, with fewer spots that require braking.
The previous Jet Motos often penalized racers for going too fast as a
result of erratic track design. Checkpoint signs were placed in locations where
it was impossible to avoid hitting them, and often sharp turns without track
boundaries would lead to certain death. Jet Moto 3 corrects these errors
with fewer irritating objects to hit and less drops of the bottomless pit variety.
If you race smartly and pay attention to what track changes are coming up, you
will be able to finish races with minimal screw-ups. 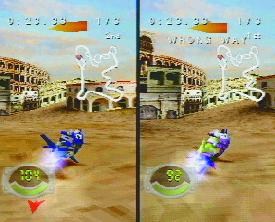 If you thought that the first
two games had elaborate and tripped out tracks, then you ain’t seen nothing
yet. Jet Moto 3 has some of the most imaginatively designed tracks ever
seen in a video game. There are ten distinct, immense, crazy tracks, including
a Subway, Catacombs, and a Volcano. I could describe these in enough detail
to make your head spin, but it wouldn’t do the game justice. Rest assured there’s
plenty of wild, bizarre riding waiting for you to enjoy.

However, 989 wasn’t simply content in making 10 incredible tracks. They had to go and add depth to the adrenaline. So, in 8 of the 10 tracks there is a hidden coin. This coin can be accessed by using the newly added bike jump feature. Find all the coins, and you are awarded access to 5 separate stunt tracks in which you race up ramps and perform mid-air, gravity defying tricks. Point values are then given for difficulty. The amount of different stunts and stunt combinations is mind boggling. I am a testament to the addictive quality of this mode. One day my friends and I sat down for a casual try at the stunt mode, and before we knew it, the time counter on the screen was reading two hours. Obsessive? Maybe. Addictive? Definitely.

But even with all these pluses, Jet Moto 3 isn’t without its faults.

For one, the grapple feature has been toned down. Since the tracks are more complex, you would expect that grapples would be needed to navigate the more demanding turns. This isn’t the case. In fact, just about all races can be won with little to no use of the grapple.

Another problem with the game is that the game engine is too forgiving when it comes to crashes. When flying at top speeds, hitting turns is no problem. Rather than slowing down, it’s easier to turn the bike sideways and ride the side of the wall. This makes certain tracks with narrower passages too easy to race on. Winning on these has more to do with when you use your turbos than with skill. As long as you leave the accelerator on, you’ll be alright.

And finally, the colder, techno-inspired soundtrack doesn’t have the same
richness as the previous games, which seemed to contain more orchestrated songs.

Clearly, Jet Moto 3 is the best offering in the series. Its ultra-fast
gameplay and overall intensity overshadow its minor faults. Of all the arcade
style racers on the market, Jet Moto 3 stands out as the most complex
and challenging. The depth proves that much time and care was put into creating
the game. Hell, even the manual is in color. Now, if only 989 Studios could
take some more corporate money and put it to a decent sequel for Twisted
Metal 3… 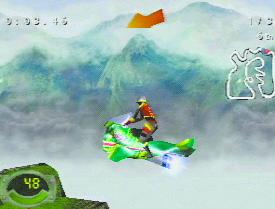 Forza kicks it up a gear.
Games 1 year ago