I’ve never seen a snowmobile race nor ridden a snowmobile, but I saw Bruce
Willis ride one in Die Hard 2 and it looks like a lot of fun. It seems logical
enough; people race everything these days. You name it and, if it moves, someone
is probably willing to race it. However, I had no idea there was a real market
for snowmobile racing. With this well-done first endeavor, EA just might start
their own.

The purpose of Sled Storm is typical of most racing games. Your goal
is to win the championship, while upgrading your snowmobile along the way. There
are two separate championships to win: the open mountain and the snocross. The
open mountain championship is comprised of courses that wind through actual
mountain trails. The snocross is analogous to motocross, where the tracks are
in stadiums and they loop around. All in all, there are a total of fourteen
different tracks.

There are six different characters available at the outset. As expected, each
one has different strengths and weaknesses. Your character and snowmobile have
five attributes that can be upgraded throughout the tournament: top speed, acceleration,
handling, stability, and tricks. The first four refer to the snowmobile and
‘tricks’ refers to the character’s arsenal of tricks.

Taking cue from Gran
Tursimo, Sled Storm includes a multitude of vehicle upgrades. Although
you cannot fine tune gear ratios or angles, you can get a really annoying
tail scoop that blows snow in the face of your opponents. Seriously though,
there are plenty of upgradeable options, such as body chassis, brakes, headlights,
engine, treads, skis, and exhaust pipes. In order to get new parts, you have
to make money in the races and sell your used parts. The only way to make money
is to win your races and perform loads of tricks. Sled Storm doesn’t
go light in the trick department either. You’ve got your no-handers, one-footed
can cans, nac nacs, decades, saran wraps, recliners, airwalks, no-footers, backflips,
supermans, nothings, heel clickers, and much more. Several of these tricks can
be linked together for some wild combinations and huge points. It’s amazing
what they can do on snowmobiles these days. 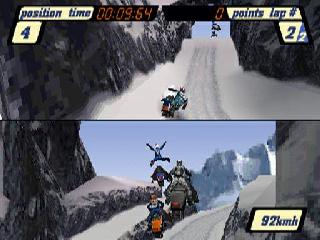 Being a first attempt at snowmobile racing, I’m pleasantly surprised at how
good the game looks. There is little to no polygon breakup, and the game runs
at a healthy frame rate. The snow effects are very well done, with realistic
powder and ice effects. The weather conditions are also great, ranging from
darkness, to fog, to rain and snow. The game developers achieved an excellent
level of reality within the confines of Playstation hardware. I don’t know a
damn thing about snowmobile racing, but it sure looks good on the Playstation.

The level design and character animation are also commendable. The levels
are long and showcase a great variety of terrain and creative jumps. There are
also tons of hidden paths and tricks to master in each stage. Your snowmobile
and rider are smoothly animated and look realistic when falling over or performing
midair acrobatics.

I didn’t really enjoy the game music, but that’s just my taste in music. Here’s
who they have to offer: Rob Zombie, Econoline Crush, Uberzone, E-Z Rollers,
Dom & Roland, and Jeff Dyck. Bless the option to turn off the music! The sound
effects are good enough to keep your heart pounding as you wind the turns.

As an added bonus, Sled Storm is one of the few games on the Playstation
that supports four simultaneous players. At the expense of the frame rate and
graphic detail, you can take on three of your friends a la N64.

Sled Storm is definitely a pleasant surprise. It has plenty of big
tracks, a variety of tricks and upgrades, and multiplayer support. The graphics
are excellent and, for the most part, the sound is great. Normally this is the
paragraph where I’d complain about the game, but there really isn’t anything
that needs much improvement. Actually, the tail scoop upgrade is the most useless
part of the game because you can’t see a damn thing with all the snow flying
in your face. Oh, and the darkness and headlight effects are better in Need
For Speed . . . That’s about it. 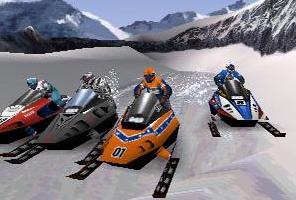 Enter the world of XLR.
Tech 1 month ago