On a gentle spring evening, without warning or any apparent source, chaos descends.
A coastal town is silently crushed, leaving small piles of dust where people once
stood. A pestilence infects the land. It callously transforms the masses into
blubbering, raving lunatics. The infected spend their final days trying to escape
from the clutches of their own shadows, thus the name of the plague – “shadow
madness.”

There is no apparent cure. Hysteria reigns supreme, as doors are shut tight and towns turn hostile to strangers. Barriers of all kinds – some quite lethal – spring up as towns fight off deranged strangers and the growing horde of bizarre creatures that are somehow connected with the disease. It’s as if some immense, demonic nightclub just shut its doors at 2 am, spewing its inebriated, bloodthirsty, vicious patrons out into the world all at once.

Stinger, a young man
in his late teens, has just watched the total annihilation of his village. In
the blink of an eye, his family, friends and community have been reduced to
powder. With nothing left, he heads for Karillon, the seat of power in the world
of Arkose. There he will find answers. There they will have a cure for the strange
malady that is indiscriminately affecting the people of Arkose.

Shadow Madness, by relative newcomer Crave Entertainment, is a RPG with an engaging storyline and some nice new features. It’s not the RPG you’ve been waiting for, but it’s a good diversion nonetheless.

One of the new gameplay features found in Shadow Madness is the ability to change the difficulty level during the game. For those who find the combat too difficult, this helps lighten the load. Another cool feature is an evasive move to avoid random combat sequences. When a monster is about to attack you at random, you’ll hear a beastly battle cry, and the Dual Shock vibrates. If you press two of the shoulder buttons down until the cry stops, you can often avoid the battle. This cuts down the excessive random encounters that plague many RPGs. 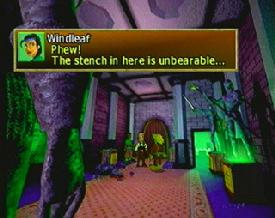 The combat sequences
are a bizarre mix of real-time and turn-based play. It’s similar to Final
Fantasy 7, but characters do not have ‘wait’ times between attacks. As soon
as you tell one character to attack or cast a spell, the next character is ready
to do something. Your enemies attack in the same way. This is a problem because
you have to pick your options as fast as possible to be effective in battle.
The easiest way to do that is to keep tapping the “confirm” button and picking
whatever action the CPU gives you by default. Sort through a menu and, more
likely than not, you’ll be dead before you can find the right choice. This takes
some of the strategy element out of the game.

The graphics in Shadow Madness are very similar to FF7. The
battle sequences look nearly identical, which should please Final Fantasy
fans. I wish I could say the same about the graphics for the characters. While
their bodies are fine, their facial features consist of simple lines that make
up the eyes, nose and mouth. Not a big deal, to be sure, but it still shows
some carelessness. On the flipside, the spell and sound effects are nicely done.

Overall, Shadow Madness is a good game with an entertaining storyline.
It is remarkably similar to Final Fantasy 7, but that isn’t necessarily
bad. It’s the perfect game to tide you over until Final Fantasy 8 is
released in the United States this Winter.

There's a lot to digest.
Originals 2 weeks ago