Castlevania is one of the most influential gaming series. Devil May Cry, Dark Souls, Rogue Legacy, and countless more all have high amounts of Dracula’s blood running in their veins. Although that well of blood has run a bit dry from Castlevania itself, failing to reveal its pale vampire skin since 2014’s critically panned Lords of Shadow 2. CASTLEVANIA: REQUIEM is not a new game but a remastered bundle of the rare Rondo of Blood and classic Symphony of the Night. While it serves as a good reminder of Castlevania’s legendary status, it’s also a bland, superfluous port of two old games that offers almost nothing new.

Symphony of the Night has nothing new to offer, per se, but it, in many regards, hasn’t slipped too far from its legendary status among the Metroidvania genre it helped birth. The overarching power buildup—from almighty badass to weak loser and then the gradual ascent back to almighty badass—is methodical but propped up by how it throws you in lets you figure out where to go. 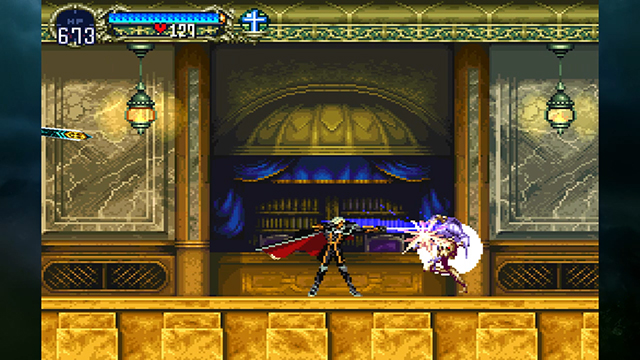 While a few cues are too obscure, it revels in its ability to make you learn the map and mentally jot down where your new abilities will be useful. This contrasts heavily with some Metroidvania games like Guacamelee, which opt to show the player exactly where to go with hints and objective markers galore. Neither is right or wrong, but letting the player guide themselves to temporary dead ends and open pathways yields a sense of intimacy other games can’t imitate, even if some areas are a pain to repeatedly traverse. Boss fights and items litter most of these pathways and even if some of the items are junk and a couple bosses are cheap, there’s a constant sense of upward mobility that continues well into the ingenious Inverted Castle.

Its progression has aged well but its other components haven’t been welcomed into 2018 as gracefully. Although it set the table for games like Devil May Cry, its combat isn’t quite as smooth as some of its contemporaries even if it has a generally decent mechanical foundation. Alucard’s quick sword strikes and backdash can lead to some exciting encounters, but it’s easy to get juggled around and be unable to escape without taking a bunch of hits.

Whether it’s merely touching enemies or getting clubbed from their sword, Alucard dramatically flies in any given direction when he takes damage. This often sends you into other enemies or follow-up attacks that the backdash doesn’t save you from because of its noticeable lack of invincibility frames. Enemies and bosses also aren’t quite tuned to work around these mechanical shortcomings, meaning they’ll sometimes attack in inconsistent patterns (sometimes even from off-screen) that leave you with almost no viable defensive options. A parry, invulnerable dodge, and toning down the damage knockback would have alleviated these issues and helped bring the game into the modern era.

But this is just one of the aspects that is begging for an update. Menus need to have some way to quickly use items along with some sorting options to cut down the tedium of scrolling through all the useless loot. Shops should not only let you sell that trash but also be spread out and have better reasons to visit them. Fast travel points should be selectable, rather than the way the game forces you to cycle through them. Since Symphony of the Night already feels surprisingly modern in many regards, all of these changes would give it the small push it would need to be fresh and new again in a way that wouldn’t mess with its overall structure. Konami could have achieved this and made a more exciting package by taking inspiration from Metroid: Samus Returns instead of just porting the original everyone has already bought a few times. 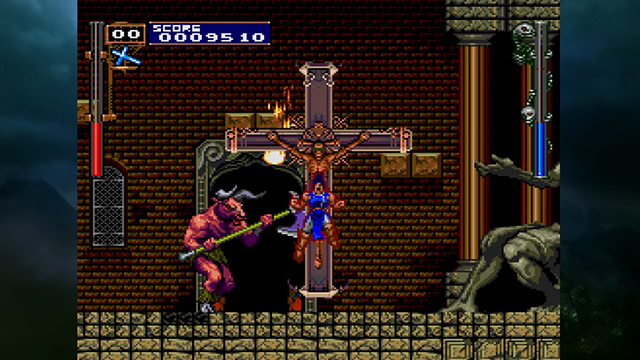 The creakiness is heard the loudest in the controls. Belmont’s jump arc is fixed once you commit, meaning air control for finer platforming and dodging projectiles is basically nonexistent. His whip is similarly on a set path, as it only covers a narrow, specific path in front of him. This razor-thin chain of death has a small hurtbox and, when combined with the specificity of the jumps, makes killing the fidgety enemies a frustrating test in patience.

Given their agility and aggressive nature, foes often demand a level of accuracy the controls can’t always grant you. Striking enemies normally is slow and will often get you hit, but leaping and swinging can often send you barreling into enemies since the fixed jump arc doesn’t allow for precision. Taking damage also has the high probability sending you into another enemy or spiraling down a pit. The sluggish walking speed also doesn’t help, since it makes dodging attacks even more difficult.

All of its shortcomings coalesce and put Belmont in lot of unwinnable scenarios where you’re at the mercy of the most punishing aspects of 1993 game design on top of rarely feeling like you’re in control. And the unforgiving aspects make it more difficult to appreciate the game’s best holdovers from 1993’s game design playbook. Branching paths give levels a more open-ended structure and are often filled with wonderfully drawn enemies, colorful backgrounds, and fantastic music. 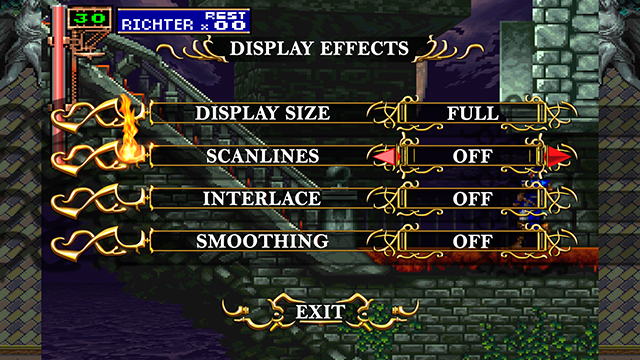 However, those strengths are not exclusive to Rondo of Blood since Symphony of the Night is similarly well equipped with the same qualities. Each is drenched in enough color to stand out while also having plenty of stone and marble grays to properly evoke a classically gothic setting. Most of the appropriately edgy enemies fit right into these castle environments since a many of them would look as comfortable on any heavy metal album cover art as they do in Dracula’s castle. The soundtracks bring everything together into one tonally cohesive package with their combinations of sweeping orchestral music and jazzy ambiance that knows when to dial it up and reign it in (especially Symphony of the Night’s timeless composition). Generation-spanning qualities like these show how powerful the franchise’s voice was and why it became such an important franchise.

That makes it almost even more disrespectful to look at how few extras Konami added. While the recent Mega Man collections were mainly just ports (outside of a few additions), Capcom at least included a wealth of features that paid respect to the Blue Bomber’s storied history. Konami only lets Castlevania: Requiem players add a few visual effects and choose from a few different backgrounds because it couldn’t even bother making either game widescreen. Instead of presenting itself as way to fans to relive their best moments with the series, it just feels like a vulturous package meant to take advantage of nostalgia.

Konami’s brazen attitude towards its stable of classic franchises (along with Hideo Kojima) is why it doesn’t have the best relationship with the hardcore video game audience. That doesn’t factor into this Castlevania: Requiem review but this collection is almost a pure manifestation of Konami’s common perception among players since it’s a slapdash port job done with the most minimal effort imaginable. Symphony of the Night still is an incredible game. However, it’s hard to not think of the many small tweaks it could have used to bring it into the modern era. Rondo of Blood is a thoughtful addition, given the fairly narrow release it had, but its horribly dated gameplay can’t completely make up for its striking art and great soundtrack. Castlevania: Requiem is a good reminder of the best parts of the series but the collection also makes it more evident that Konami is maybe currently not adept enough to create thrilling new experiences and is only capable of haphazardly bundling together old ones in hopes that we won’t notice the difference.

Castlevania: Requiem was reviewed on PS4 via a digital code provided by the publisher.

Castlevania: Symphony of the Night Netflix adaptation would be a ‘challenge,’ says producer

The cult classic may not come to Netflix.
News 2 years ago

What a horrible night to have a curse.
News 3 years ago

The Game Revolution Game of the Year.
Originals 3 years ago

The 10 best TurboGrafx-16 Mini games that are worth playing

A great mixture of English and Japanese titles.
Originals 4 years ago