Finally, what fans have requested for 20 years—more fat plumber in raccoon dog suit!

When I was growing up, Mario was synonymous with not just Nintendo, but “new Nintendo console". Each generation had a brand new, revolutionary Mario experience to drive millions of consoles out the door and into our young, gluttonous hearts.

It’s really too bad that Nintendo didn’t take a page from its younger self with the 3DS launch. If Super Mario 3D Land had been on the shelves since day one, I have a hard time imagining that the fledgling system would have had the same slow start. I would hope that they’ve learned their lesson, but mistakes are repeated far too often in this industry for me to be confident of that. (Modern Sonic, anyone?)

But enough hypotheticals and second-guessing. Super Mario 3D Land is right here, right now, and it couldn’t come soon enough. If you have a 3DS, you owe it to yourself to go out and purchase it. If you don’t, well—it might be time to take advantage of that price cut.

This is a game that feels at once immediately familiar yet noticeably distinct from any other Mario game. All of the warm retro touches are there—airship levels, ghost houses, a complete lack of story beyond “Bowser’s kidnapped the princess”, flagpoles for end goals, a pixelated 8-bit Mario on the level progression screen—everything you’ve come to expect from a Mario outing. The game’s structure is highly reminiscent of New Super Mario Bros.

The execution, however, is not, and it’s really like no other game you’ve played before. 3D Land gets impressive mileage out of its titular feature. I still maintain that 3D handled properly is not just a gimmick, and 3D Land is a perfect example of that philosophy. There are actually places where the game would be more difficult and frustrating in 2D, because it was designed with 3D in mind instead of just as a visual treat.

Take, for example, a level in which the camera goes into birds-eye view high up in the sky as Mario falls from one midair platform to the next on his long descent down to the goal. Given the relative heights of the platforms and the camera angle, you’d have to struggle in 2D to figure out which one to jump down to next. Turn up the 3D, though, and the next highest platform clearly pops out more than the ones below it. 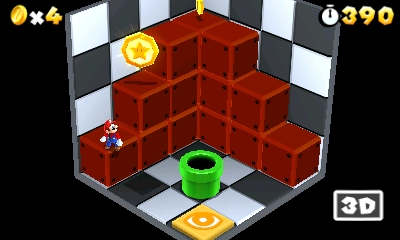 Some small bonus areas use the 3D for optical illusions. In 2D, you might see what looks like a stack of boxes with a star coin sitting on top of one. But if you try to grab it, you’ll see Mario seemingly jump through the box instead of landing on it. It’s only with 3D on that you can tell that the box is actually much closer to the foreground than the others. Sadly, these optical illusion puzzles are few and far between, and as much as I appreciate how well the 3D factors into the gameplay, it makes me wish for even more.

I don’t know how or why, but the 3D is also far more comfortable in this game than any other 3DS title that I’ve played, including Ocarina of Time. For the first time, I’m able to leave the slider on full blast for a game’s entirety and not have any disorientation issues. It’s a small blessing too, given that you will definitely want the 3D on at all times.

As I mentioned before, the camera is integral to the gameplay in many areas, and it takes on many forms. Some levels park the camera behind Mario as he travels forward; some give you a traditional side-scrolling view; some swing it in front of him as he flees a pursuing threat; some go birds-eye; and some have the type of set 3D angles we’ve seen in Super Mario Galaxy. Oftentimes a level will feature combinations of the above. The amazing thing is that not once does it ever get in the way; I’ve never played a game that has this much variety in the camerawork and still manages to do it flawlessly. 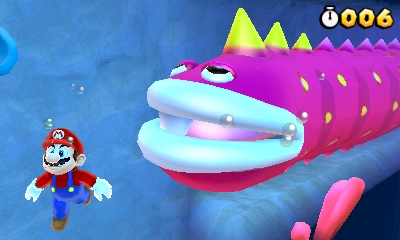 The power-ups are sure to brighten up crotchety old-school gamers. The one that obviously steals the show is the good ol’ Tanooki suit, which proves to be the most useful and prominent, now that it isn’t overshadowed by the very similar Raccoon suit from SMB3. The precision jumping that the Tanooki suit grants with its slow falling speed is invaluable in the later levels.

Boomerang Mario is a new one, which is the best choice for your offensive needs. The only problem with it is that it pretty much makes the Fire Flower obsolete, giving you a ranged attack that can hit multiple opponents and pick up coins for you on its flight. Still, the power-ups are all very useful and balanced in that they’re not all over the place. I often found myself toughing it out as Super Mario because a power-up wasn’t readily available, which works out in the game’s favor by adding a somewhat strategic element as to when you should use your single stockpiled power-up.

Another impressive aspect of the game design is in the difficulty curve. Like most Mario games, it takes a bit longer than I’d like to start ramping up—an experienced player will go through a good six worlds before they start losing lives with any frequency—but the difficulty steadily increases as you go without any unreasonable spikes or dips. 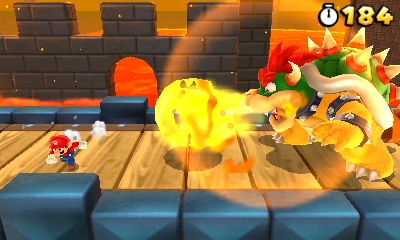 It doesn’t take long to make it through the first eight worlds and “finish” the game, but you then unlock eight more, which give you re-tooled versions of the original levels that are different enough and a lot more challenging. It’s the second half of the game where you can drop lives like flies, but the gameplay is also much more thrilling and intense, with some levels featuring a desperate race against an almost-depleted clock or the infernal Cosmic Mario from Galaxy endlessly chasing you down—or both.

I’m hard-pressed to find problems with 3D Land, but if there’s one aspect that’s less than satisfactory, it’s the lack of boss battles and the variety therein. The throwback to the NES days of stomping on vaguely Koopa Kid-looking baddies and scooting past Bowser to flip a switch is fun, but there’s never really anything beyond that. That being said, I’ve also come to expect less emphasis on bosses and more on platforming in recent Mario games, so I wasn’t bothered much at all.

There’s minor StreetPass functionality that lets you refill mystery boxes with other people, which gives you easy shots at more star coins. You also get to see their completion times if you want a little competition with friends (or more likely, complete strangers).

Super Mario 3D Land is one of the best Mario games in recent memory. It’s better than New Super Mario Bros. and just about on par with Galaxy. A few months back I stated that Ocarina of Time 3D was the premier reason to own a 3DS. That is no longer the case. Mario is still Nintendo’s man to move hardware, even if he is a bit late to the party.

Review copy not provided by publisher.

Boost is out, Adventure could be in!
News 6 days ago
9