Considering how iconic his performance is as the narrator of The Stanley Parable, it’s amazing that Kevan Brighting isn’t more prolific in the gaming sphere. His voice perfectly captures corporate monotony with just a hint of sinister undertones. That’s a combination that seems tailor-made for all types of interactive experiences. So, when his distinctive tone showed up in VOID BASTARDS‘ launch trailer, it was hard to not immediately jump on board. Thankfully, Blue Manchu’s strategic first-person adventure is much more than just a showcase for an underappreciated voice actor. Taking inspiration from the team’s previous work on games like BioShock and System Shock 2, Void Bastards is the procedural thinking man’s shooter you’ve been waiting for. 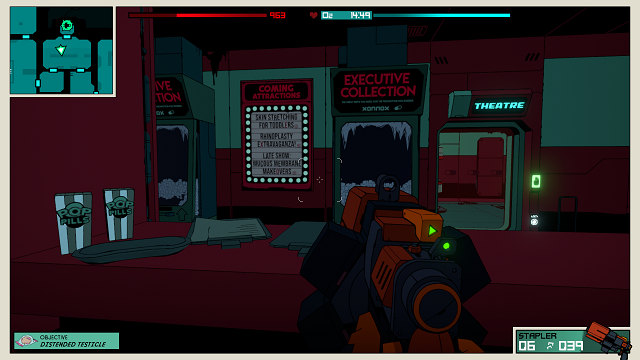 You play as one in an endless line of freeze-dried fugitives thawed out to serve your sentence. You’ll be jumping between derelict wrecks scrapping for spare parts as you try to build whatever dohickey your jailers desire. Your impediments are many, including various other citizens and security implements that want you dead. Loot everything you can, keep your fuel supplies up, and you might just survive to get your next assignment.

It’s a grand setup with a lot of potential, and the gameplay side of things definitely lives up to that promise. You start off with a handful of weapons and tools, just enough to get you going. New items come slowly, at just the right pace to keep progress interesting. As you build new items, you’ll go deeper and deeper into the titular void. Ships start to become more complex, enemies get harder to take down, and security gets tighter. You have to adapt if you want to keep your character alive. 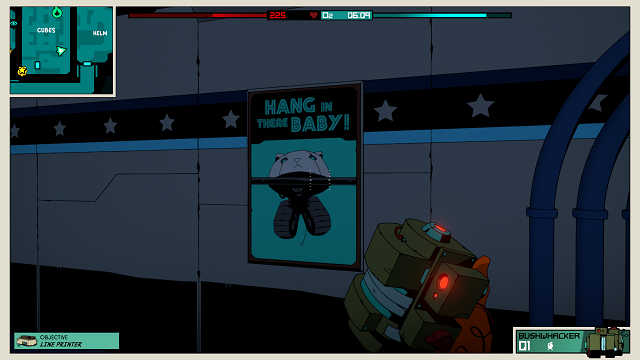 In the tradition of the best roguelikes, Void Bastards is a world onto itself; a world that doesn’t explain itself lightly and a world that doesn’t seem to value your life all that much. It’s easy to stumble into a horrible situation and die instantly, which can be tough if you’ve built up a lot of ammo. Thankfully, weapons and items you build are permanent, so your progression through to the campaign’s conclusion remains intact. Dying never brings frustration but only excitement in anticipation of what’s coming next. It’s one of those games that’s hard to put down, and the hours just melt away as you slowly build out your upgrade tree.

In fact, the main issue with Void Bastards as it stands is that its world feels a bit too closed off. The reasoning is understandable: your character is a prisoner trapped in a corporate hellscape. Bosses in this type of environment don’t tell the worker ants what’s going on. It’s just that the environments have so much character that it’s a shame we don’t get to explore that more as we jump from ship to ship. There are no text or audio logs to find, so we only get hints through propaganda posters and other scraps of worldbuilding. 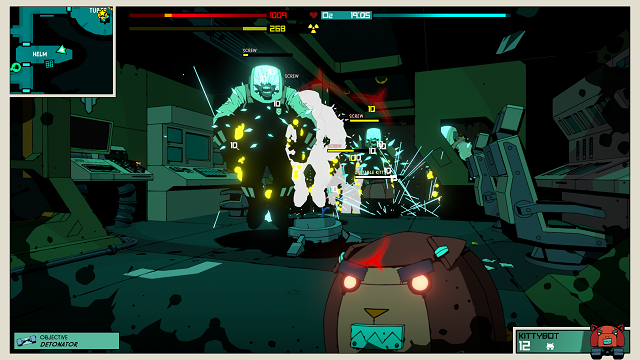 The roguelike elements work and, thankfully, so does the action. First-person combat in these types of games can be a crapshoot, even in fun titles like Immortal Redneck and City of Brass. Randomization works against the tight level design that often makes a cramped corridor shooter work so well. If the game lets things get too procedural, players can’t experiment with weapons and find their groove. If it swings too far in the other direction, players tire of grinding through the same scenarios over and over.

Void Bastards gets around this by keeping things consistent. Each ship features a random layout, but the rooms and chambers are uniform. In addition, each ship has a certain function imprinted onto it that you can scope out beforehand. If you’re boarding a pleasure cruiser, you can raid the cafeteria for food rations. A fuel tanker will keep your ship going, and a hospital ship will give you a rare opportunity to heal up. You don’t have to visit each ship to you warp to, so boarding and navigating are both vital choices you need to make. It’s a deep layer of strategy for a game with a pretty good shotgun equivalent. 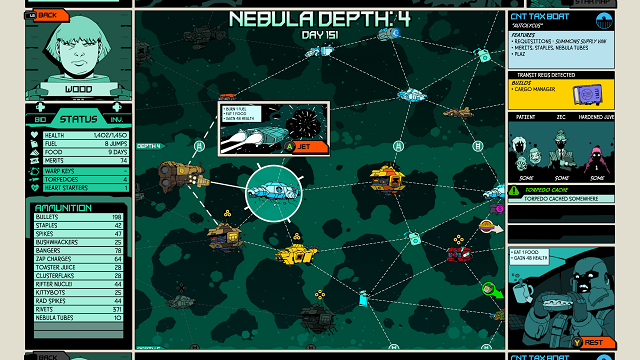 Speaking of, Void Bastards‘ weapon selection is one of its big highlights. Outside of a pretty standard pistol you get at the start, each tool of destruction stands out in both form and function. There are robotic explosive cats that lure attackers to their doom, a void gun that lets you move objects around, and a satisfying staple gun that grinds through enemies up close. Choosing which three weapons you take on any given ship is vital, and each one seems to have a specific use case that reveals itself through experimentation. There was never a useless upgrade or a tech tree dead end. Every tool has a purpose that’s thrilling to discover.

As you go on, you’ll find that these purposes often forgo combat entirely. While Void Bastards‘ action chops are nothing to sneeze at, this actually is a game about scavenging and getting out of dodge. Enemies spawn in constantly in some ships, overwhelming you with a flood of fodder. Some enemy types are purposefully tough and not fun to fight, forcing you to think differently. Players who don’t weigh all their options will find themselves dead by their own hand, which makes the satisfaction of surviving a tough encounter that much better. 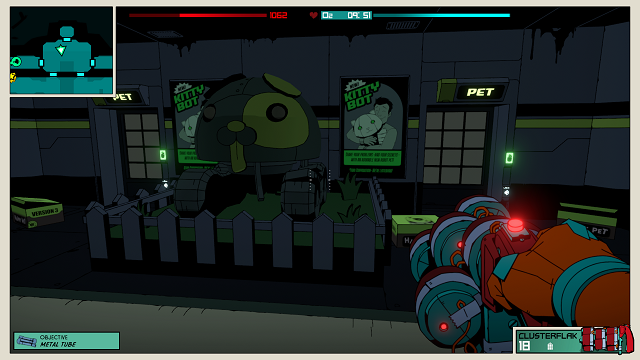 It’s telling of how finely tuned the gameplay is that I haven’t even touched on Void Bastards‘ eye-popping visual style. Blue Manchu emulates a comic book, but not simply through a layer of cel-shading. A white box frames all the action, character models consist of detailed line drawings, and cutscenes are motion comics. It does make some of the weapon animations a bit stiff, and there was some noticeable screen tearing even in 4K on Xbox One X. Still, it’s a small (and fixable) price to pay for something that evokes this much style.

Ultimately, its minuscule shortcomings don’t drag down Void Bastards from its lofty place among the greats of first-person roguelikes. This is a game that takes the side activities in BioShock and puts its full weight behind it. If you’ve ever hoarded every useless scrap of paper and loose cigarette in other games, Void Bastards will reward you. It’s a constant cycle of upgrading your character and venturing deeper into the void while you find new rooms and tougher challenges. Best of all, there’s a definitive end alongside the promise of a harder difficulty. It’s everything you could want in a procedural shooter, bridging the gap between action and strategy in an innovative new way that makes it easy to want to jump into the void over and over again.

GameRevolution reviewed Void Bastards on Xbox One X and PC via Steam with codes provided by the publisher.

Meaningful progression that never gets old. Balance procedural generation that makes you feel in control. A unique arsenal of tools…
Friday

Meaningful progression that never gets old. Balance procedural generation that makes you feel in control. A unique arsenal of tools…
February 10

Meaningful progression that never gets old. Balance procedural generation that makes you feel in control. A unique arsenal of tools…
February 21

Meaningful progression that never gets old. Balance procedural generation that makes you feel in control. A unique arsenal of tools…
February 24