If even I’m leavin’.

When it comes to “Street” games, most of us think of over-the-top animations, players on fire, and other half-amazing, half-ridiculous things. FIFA Street in the past had many of these characteristics. This year's installment has surprisingly changed much by switching from the fantasy world of street soccer and heading into a realistic trick universe. After years of development specific for this year’s title, Electronic Arts has created the Impact Engine, which allow players to maneuver the virtual ball with the skills of professional soccer players and the flash of “amateur” street ballers. This new FIFA Street steps into a whole new ballgame, and it looks fantastic.

With the release of FIFA Street, EA has put two major soccer titles on the market within the last six months. Already competing against PES and other smaller name soccer games, EA looks like they are creating competition for themselves. But there is no reason why people can’t own both FIFA 12 and FIFA Street. They bring separate elements everyone can enjoy—the best of both worlds. In fact, I think an 11-on-11, all regulations rules match in Street would be the complete package, but I'm getting ahead of myself.

You can kick Street off with one of the many game modes that are available. Online play is available, but it will be key to learn the basics before stepping out against others. You can practice in “Hit the Streets” and play in a few different match types: 5-A-Side, Panna Rules, Futsol, Last Man Standing, or a match of your own rules. 5-A-Side is the closest to a classic match you will get, in lieu of the standard 11 players. With Futsol, the only difference is that there are no walls, so you need to be careful with passes.

Panna Rules is all about “beating” your opponents using flashy and strategically placed tricks in order to get past them. It is two against two, and any time you are able to panna or "nutmeg" the opposition, you get one point that may be banked into your team's score by scoring a goal. At the end of regulation time, the team with the most banked points are the winners. Finally, Last Man Standing is a reverse survival match played 5-on-5. The objective is to score goals, but every time your team scores, you lose a player. The winner is the player who can get all their players off the field first. It's an interesting concept that seems simple but will tick you off after losing 5-1 (yeah, it happens). This is largely because the computer seems to know what you are going to do and has a knack for stealing the ball.

The bulk of FIFA Street is played in World Tour, where you create a custom player and squad and venture off into the world on the quest to be the best. The beginning of your tour will start regionally and work up through the national stage, the European stage (or in whatever continent you began), and finally the world stage. The higher you get, the harder the teams and the better the players. Those familiar with the EA Sports BIG brand will notice the similarities FIFA Street has with NBA Street. After beating certain teams, you will have the option to sign a player from the losing teams as you continue your trip to becoming the top squad. 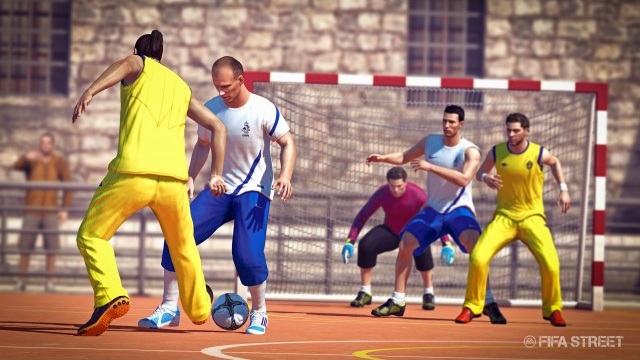 Each stage in World Tour will have a variety of matches that will need to be beaten in order to move ahead. Most matches are against AI but some have the capability of playing against others online. Opting for a higher difficultly setting will allow for more achievement points and rewards that can be used to better your squad. When starting off, all of your squad, including your created character will only have a few trick skills and points, which are earned by simply playing matches, regardless if they're won or not.

So don’t worry that your guys aren’t performing the moves many of the top players are. The process of leveling up can be a fast one and soon you will be nutmegging everybody with a flurry of unstoppable tricks. You most likely will suck starting off, but you won't have to worry about the learning curve. Soon enough, you'll be able to throw down a combination of moves without hesitation.

In every mode, the physics engine is well-polished. Players and the ball respond to just about everything authentically. If you find yourself chasing after a loose ball and run into someone, your player will bump, trip, or jump over them accordingly. Balance seems to be a major factor. Many players will lose their balance attempting to change directions too quickly or will fall if faked out by an opponent. In many ways it brings a touch of realistic interaction but at times will frustrate you with ridiculous tangles and moments where all of your player's momentum comes to a stop. This can be especially a problem with the smaller pitches within a crowded space. 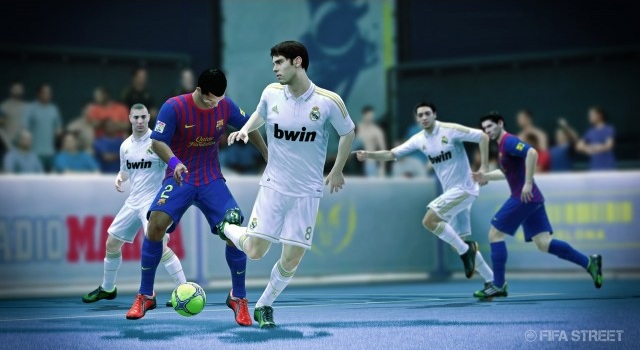 This means body control is of utmost importance. Field types play a role into how players move around also. Synthetic turf, hardwood floors, and concrete will allow for faster motion, while textured surfaces like grass slow the game down. Both players and the ball will react to different surface types. Kick one off of a chain link fence and it won’t return as fast if kicked off of a brick wall.

Likewise, the presentation is well-balanced, with plenty of elements that help you feel like you're a part of the space. Environments will signal the importance of the match; in World Tour, the better your squad becomes and the higher their level rises, the bigger the crowds will be. Fans will cheer and focus on the action more; with no line judges, sideline fans will throw up their hands as if signaling for offsides. And there are plenty of venues to experience these moments.

On-field action is centered on the players, so without the distraction of commentators, you are able to hear players communicate with each other. The attention to detail is great, with pre-match warm ups and pep talks showing the comradery teams have. The only mix-up at times is that some accents are voiced correctly; sometimes a German player will all of a sudden sound British. Luckily, the soundtrack is superb.

FIFA Street offers months of entertainment and is just downright fun to play whichever mode you choose. It is a breath of fresh air to see Street showing the respectful side that competitive "street" sports have. Everything isn’t about being in your face, “Yo momma!”, we are the best, everyone sucks. It’s about two teams competing against each other—may the better team on this day win and, when it’s all over, let’s all grab a pint. FIFA Street shows class and represents the world of street futbol well. There aren’t many reasons why this one can’t be a classic.

It's finally falling this May.
News 4 days ago