Catan has a peculiar history with video games. Releasing back in 2007 in the glory days of Xbox Live Arcade, many 360 gamers got a crash course introduction to this classic tabletop experience. It was a magical thing, trading resources with the same players who would later chainsaw you in a round of Gears of War. The XBLA CATAN (and the similar PSN version) would eventually face the axe due to developers going under. While there have been a few virtual versions since, none have generated as much excitement as Catan‘s debut on Switch. Can Exozet and Asmodee Digital recapture that XBLA magic? Or, will the dice just keep rolling a seven? It turns out that it’s more like a three. 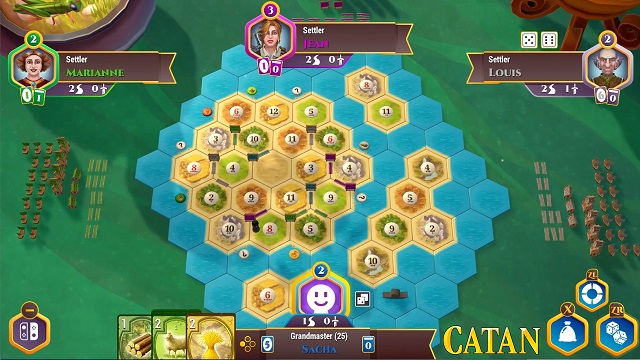 For the uninitiated, Catan is a tabletop game with outward complexity and inner workings that rival chess. It attempts to model economic dealings on a barren island, with each player taking the role of a settler. Hexes divide the board, each one gifting a common resource to the player whenever a corresponding number comes up in a dice roll. Using this somewhat unreliable supply chain, you must purchase settlements, roads, boats and everything else a growing civilization needs. Whether you build out the biggest thoroughfare or amass the largest army, whomever has the most victory points at the end claims the whole kit and kaboodle for themselves.

On its surface, you can see a lot of XBLA Catan in this new version. Part of that is just that the team sticks pretty close to the board game source material, but there are little extra things too like the emotes in multiplayer matches, the sound effects for certain actions, the trading interface. If you played the heck out of that version, you’ll be at home here. The differences come in the tone of the conversion. Everything is a little more subdued in this new iteration. Emotes are simple emoji rather than screen-filling special effects. The dice don’t roll so much as they fall onto the screen. The music sounds less adventurous and more out of the way. It’s like playing a board game just beside the opening thoroughfare of a theme park, which is a space designed to get people moving rather than capture their attention. 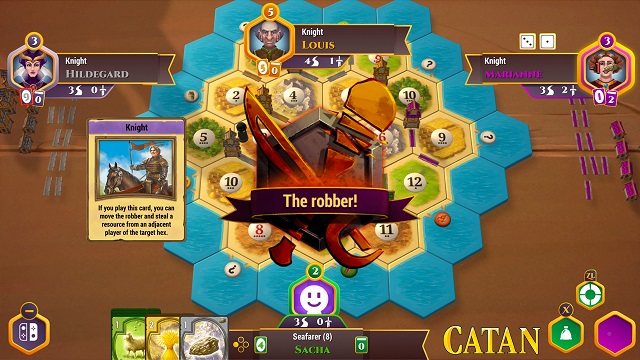 The biggest difference between the two iterations lies in just how slow the Switch version can be. On XBLA (and in most turn-based games worth their salt), there are options to speed through actions by the computer. Not only does Catan lack those options, but the design of the menus and speed of the cursor make the act of playing a full game an arduous task. Even at its fastest, Catan is not a fast-paced endeavor, but it’s easy to imagine that a group of friends wouldn’t take as long around a table as the digital opponents do while playing solo. That’s just backward, and the problem multiplies when you have to wait for online players to consider each trade offer and settlement placement. This is a podcast game where listening to a podcast may be one of the only ways to enjoy playing.

Setting up matches is another issue that demonstrates the lack of options. You’ve got a few house rules (the same that were in the XBLA version), but there somewhat obfuscated behind the menus. The tutorial is too, for that matter, which is completely optional and several spaces to the right of the single player content. A new player just diving in will get no help whatsoever unless they back up and find the guide. It’s hard to know how many players will just be diving into Catan without knowing the game already, but it’s a shame that the gameplay isn’t more welcoming. 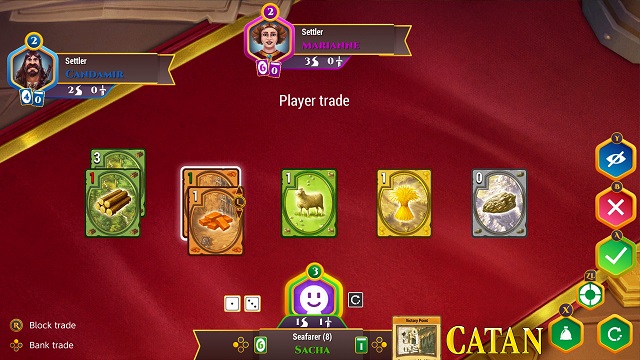 Alas, Catan isn’t concerned with newcomers or anyone who might want something off the beaten path. When you purchase Catan, you know exactly what you’re getting. If you’re just looking for a way to play without setting up a board, you’ll be happy with what’s on display here. Sure, a game might take longer than your average morning commute, but many board gaming enthusiasts out there will probably be OK with that.

This version of the game comes with the Seafarers expansion packed in for free. If you want more, the Cities and Knights content comes at an additional fee on day one. Hopefully more expansions (or possibly even the spin-offs) will eventually make their way to the Switch version. It would certainly help with the variety. However, even if they never do, this base game will satisfy anyone looking to just play a round of Catan. Nothing here will blow you away, and there are better digital implementations out there. It does just enough to get the job done. As we’ve seen with many releases on Switch, that’s usually enough for most people.

GameRevolution reviewed Catan on Nintendo Switch with a copy provided by the publisher.

An accurate translation of the board game on the go. A host of single-player scenarios and online multiplayer options. You…
Friday

An accurate translation of the board game on the go. A host of single-player scenarios and online multiplayer options. You…
February 10

An accurate translation of the board game on the go. A host of single-player scenarios and online multiplayer options. You…
February 21

An accurate translation of the board game on the go. A host of single-player scenarios and online multiplayer options. You…
February 24

Best Party Board Games For Families to Play at Christmas 2022

Christmas is coming, and if you’re hosting then you undoubtedly need some family-friendly party board games to play. The following…
Originals 2 months ago