Cooperative games often get away with more than they should because both suffering and joy are better when shared with another person. Every agonizing minute of Resident Evil 6 is made ever so slightly better when you have a Helena to your Leon as is thinking with another set of portals in Portal 2. Games on the worse end of the spectrum, like RE6, tend to try to use co-op to distract from their shortcomings and while most titles are not that actively awful, they build themselves around that mantra regardless like ZOMBIE ARMY 4: DEAD WAR. While this zombie-shooting experience avoids some of the catastrophic lows of other co-op zombie shooters, it still can’t escape its bland nature and the array of surrounding questionable decisions.

Zombie fiction can easily shuffle into uninspired territory, especially in video games as the undead are the biggest go-to fodder enemy. There’s room to breathe life into the dead yet Zombie Army 4 doesn’t quite do that. Some hellish vistas and arcane imagery are interesting on the surface, regardless of the game’s overall rudimentary and dated technical prowess, but the juxtaposition serves as a stark reminder of how quaint the rest of the game is. 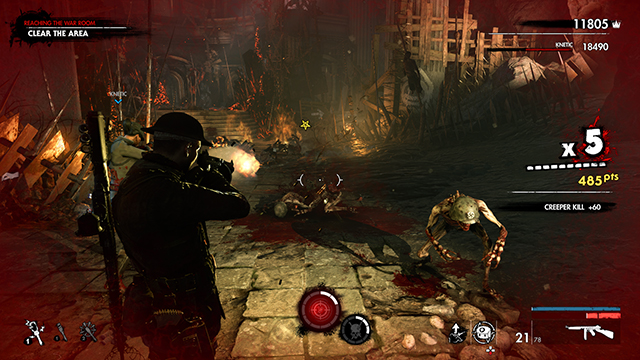 The campaign is the biggest proponent of its banality, as it is a repetitive slog especially after a few hours. Levels are haphazardly strewn together by a lifeless story and abysmal storytelling, but suffer more because of the monotonous gameplay that binds the stages together. Zombie Army 4 is a capital-S Shooter™ as that’s almost your only way of interacting with the world and the thing that you’ll be constantly doing.

The shooting itself feels pretty smooth and responsive, which is also bolstered by the satisfying slow motion montages that play when you nail a big shot. Witnessing the fruits of your labor is rewarding as is seeing that these zombies still somehow have testicles; gross, green, decaying Nazi testicles that are ready to be shot into bits.

But those moments don’t come close to offsetting the mindlessness of the shooting. There’s nothing to break up the monotony, which Strange Brigade, Rebellion’s last game, avoided through its simple puzzles (in addition to its more inventive tomb-raiding theme). Here, it’s all shooting, all of the time and that grows tired, especially given how little your tactics change over the game. Tedium only grows as Zombie Army 4 forces you to constantly scrounge for ammo, which is busywork that points out how often you’re mindlessly shooting the scores of grunts or bullet sponge elites. 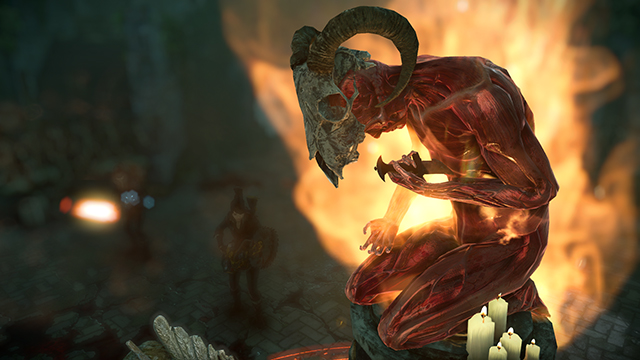 Different loadouts should change up the game, but they don’t. Since you’ll mostly be shooting regular zombies that explode after just a couple shots, it doesn’t quite matter if you pick the good shotgun or the slightly more powerful one with a smaller clip. And that choice is also less important once you start upgrading them as dumping upgrade points into a firearm discourages you from switching up your arsenal.

That carries over to the other parts of the shooting, too. Perks hardly change your character in meaningful ways since most of them are either too subtle to make a difference or are locked behind a level you might not ever get to. Each class of weapon also has the same unexciting ultimate, further squandering the customization systems and showing their limits. Even the characters only slightly differ as they offer some very, very minute stat changes that are only apparent when reading about them on the main menu. All of these systems come together and either actively discourage you from changing your strategy or don’t reward you for doing so, which is how the game falls into a rut it can’t shamble out of.

Difficulty options would be better at forcing the player to think and adapt, but they’re too unevenly spread. Normal is mostly a joke as it often — especially in the early levels — sparsely peppers in zombies a handful at a time. It’s less of a Zombie Army and more a small Zombie Platoon. But then it’ll drastically shift and then dump a ton of undead on the players in a way that it doesn’t naturally build up to. You can change how many enemies it spawns as well as ratchet up the difficulty, but it takes some tweaking. Hard mode at least makes you think a bit more as it turns on friendly fire and makes enemies more powerful. However, it’s going to take some added work to figure out what you want and, even after some tinkering, you still might not have an ideal time with a gratifying amount of challenge. 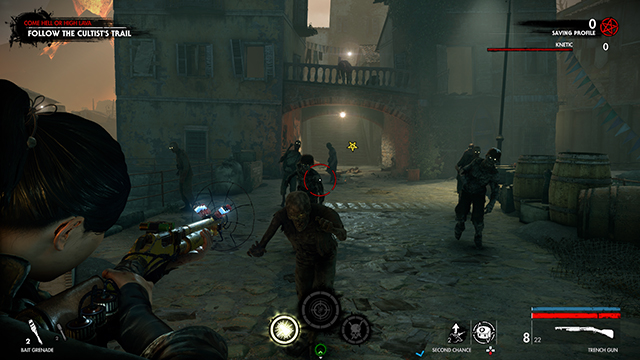 Zombie Army 4 is plagued with issues both big and small and the smaller ones, like a zombie horde, become even more deadly when they team up. It’s full of bothersome issues that constantly have you questioning why.

Why isn’t the “confirm” button (X on PS4 and A on Xbox One) restart you from the last checkpoint when you die? Why can’t you get notified when someone is reviving you and why doesn’t it have a meter for the person getting revived? Why does the game keep you in “last stand” mode if you’re out of self-revives and teammates to resurrect you? Why do you automatically drop story-critical items if you run out of ammo? Why do you have to stomp corpses three or more times to get ammo to pop out?

All of these questions (and more) probably don’t have convincing answers and repeatedly diminish the experience in tiny but important ways. And that goes directly against what Zombie Army 4 wants to be. It’s trying to be a relatively easygoing co-op experience but the best kinds of those games are smooth enough to keep you from focusing on their faults. Here, it’s hard not to because there are so many of them. 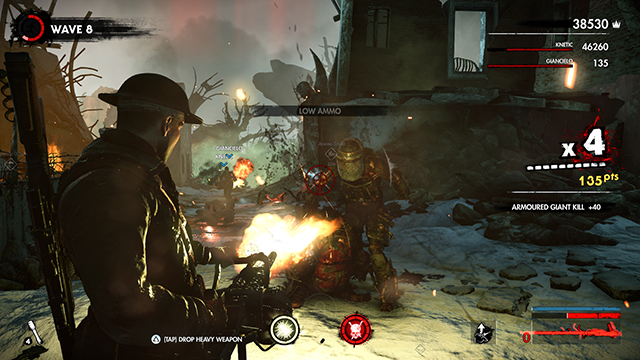 Horde mode, despite being predictable in nature, is where Zombie Army 4 is at its best. It still suffers from those aforementioned headaches but it distills the game down into its barest elements enough to avoid hitting all the same roadblocks present in the story. Zombies come out at a steady clip, eliminating the campaign’s pacing issues, and let you focus on the shooting rather than the poor upgrade system, filler mission structure, lack of ammo, and more. It’s just shooting and since the shooting feels good, it’s the mode best geared to play with your friends.

Killing zombie Hitler should be a highlight of any experience as any chance to squash Nazi scum should be. But in Zombie Army 4’s campaign, it was more of a relief as it signaled the end of a tedious, monotonous experience that was only bolstered by the ability to get through it with other people. It is plagued with numerous problems that peck away at its foundation that’s already weakened by the mundane nature of its Nazi zombie premise. Mindless co-op shooters can be alluring and Zombie Army 4: Dead War tries be one of those brainless games, but ends up being more braindead instead.

GameRevolution reviewed Zombie Army 4: Dead War on PS4 with a copy provided by the publisher.

Decent shooting mechanics. Horde mode is derivative but shows off the game at its best. Numerous unfriendly and odd design…
Friday

Decent shooting mechanics. Horde mode is derivative but shows off the game at its best. Numerous unfriendly and odd design…
February 10

Decent shooting mechanics. Horde mode is derivative but shows off the game at its best. Numerous unfriendly and odd design…
February 21

Decent shooting mechanics. Horde mode is derivative but shows off the game at its best. Numerous unfriendly and odd design…
February 24

Boost is out, Adventure could be in!
News 5 days ago