A game in need of sensitivity counseling.

I’ll admit that sometimes I don’t entirely understand the gamut of games Japan has to offer. On one hand, there are gameplay and artistic masterpieces like Katamari Damacy and Okami. And on the other, lotion-slathered hand are games like Conception II and the current subject, Mugen Souls Z. This is not an RPG for everyone; that much is for certain. Unfortunately, the elements that makes it so niche are either overwrought or downright repellant.

The premise in this sequel is that the ultimate god of the twelve worlds, Syrma, crosses paths with the pompous imperialist, Lady Chou Chou, protagonist of Mugen Souls. After falling into an odd coffin Syrma carries, Chou Chou is bled dry of most of her powers and her stature, being reduced to a diminutive little munchkin. Syrma surmises that if she absorbs the powers of eleven other gods, the overflowing power will return Chou Chou to her original size and possibly stop some impending doom she can vaguely predict.

Honestly, the story could have been repurposed into something more serious and immediate, compelling the player to pursue the finale with the hunger many other RPGs inspire. Not that I am against lighthearted tales, but this one is so vapid and ignorable I’m surprised anyone put pen to paper to write it.

Besides its woeful linearity, the characters you meet are so inept, it’s a surprise the player can defeat enemies with their party at all. In every dialogue, the party members act embarrassingly and often undermine each other. It’s playful but tiring. And though the soundtrack improves as the game progresses, each of these scenes is accompanied by something tantamount to circus music—annoyingly plucky and repetitious enough to haunt your dreams.

Another one of the game's sins is the way in which “cut-scenes” are employed. Having played games like Phoenix Wright and Virtue’s Last Reward, I’m familiar and mostly fine with the method of having large character portraits talking to the viewer. However, Mugen Souls Z puts absolutely no effort into conveying the acts they’re describing. Instead of watching a character run away, the other ones will just say, “Hey, she’s running away!” One of the main antagonists tries to wake up another character by actually verbalizing “Poke poke. Nudge nudge.” instead of doing it on the screen for players to see. Except for a select few moments, the majority of events in the story is told to you instead of acted out with animation.

I’d chalk this up to a limitation in technology, but this game is on PS3, not PS2. All the graphics, though colorful and clear, are so simplistic and blocky that I was concerned 2000 might call asking for its game back. That the cleanly drawn portraits barely even move during dialogue sequences makes the dated nature of the visuals even more disconcerting.

Sure enough, the only highlights come during battles initiated by encounters on the drab, uninteresting stages. As more special moves are unlocked, their nature becomes increasingly showy and over-the-top, inundating the screen with flashes and explosions. As the party member count and levels increase, there will be an overabundance of these special moves to dish out even if SP remains a precious resource.

Each battle is turn-based and each character has the ability to run about the field within a certain radius. The battlefield also features crystals which cause various enhancing and disabling status effects in their little areas of effect. By utilizing moves with the Blast Off feature, which unlocks several chapters into the game, players can actually play pinball with their enemies and move these crystals around to different locations albeit with limited accuracy.

Admittedly, the only fun to be had in Mugen Souls Z is in its battles, but they are absolutely inundated with a ridiculous number of systems. I should first note that many of these unlock at a Final Fantasy XIII rate, but by contrast, the learning method is nowhere near as strong. Whenever something new is unlocked for the player, the game literally displays what looks like a manual page with a few lines of description. These “tutorials,” if you’d even call them that, are then not even accessible unless you return to the main hub, the G-Castle, so if you wish to recall any of the million different systems on the world map or battlefield, you’re shit out of luck.

I’d honestly have been fine with a few of these things, but it feels like the developers threw as much as they could into the pot in the hopes that players would find something flavorful. There are Ultimate Soul moves which attack every enemy, Damage Carnivals which increase post-battle bonuses each time a meter is filled, chained special moves that employ multiple party members to cause high damage, Fever Mode which increases Blast Off potential after players break crystals, space battles involving G-Castle’s robot form, and it goes on and on. All of these things have their own meters and individual points requirements—SP, Mugen Points, Power Points, Fever Stars, G-up, etc.—and all of them left me wishing for just one complex battle system that’s easy to approach and fun to master.

One of the useful but also most reprehensible systems involves [groan] Fetish Poses. Fetish Poses. Let that sink in while I explain their purpose. The basic idea is that Syrma has the ability to “peonify” enemies, turning them into Shampurus, increasing Mugen Points and powering up G-Castle. Peonifying enemies will also cause Syrma’s coffin to deploy health and buffers during battles. 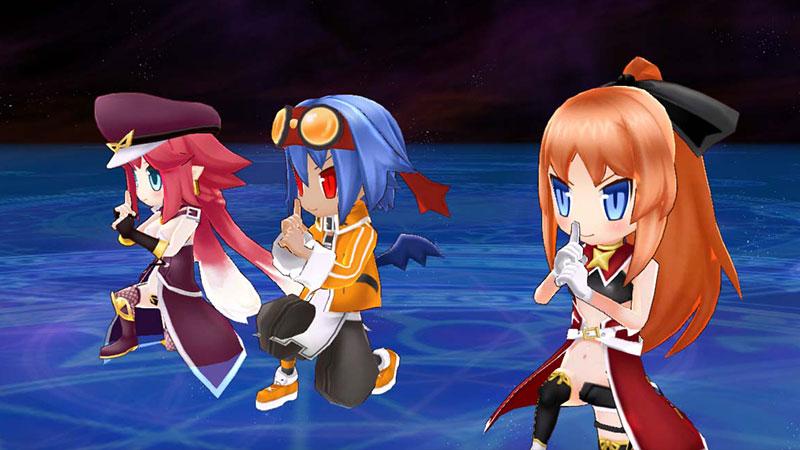 Syrma accomplishes this by literally seducing enemies. By pushing the Captivate button, you are given a selection of seductive poses to use with varying degrees of success. Syrma can also transform her body and personality into one-dimensional archetypes, such as Hyper, Ditzy, Sadist, or Bipolar, which enhance her ability to seduce specific enemies with specific Moe affinities. These Fetish Poses can also be used to seduce the crystals and various places in each world with clues like “It’s into complicated girls.” or “It likes to be dominated.”

So to be clear, Syrma, who despite being an old god has the body of a well-endowed teenager, must use her body and sexuality to seduce non-humanoid creatures and animals into her employ. These poses often involve her laying on the ground with her legs spread apart or bending away from the viewer to flash her lace panties. Depending on the stat-increasing clothing she is wearing, more of her body may be exposed, though never to the extent of fully exposing a breast or her genitals.

Mugen Souls Z relies heavily on underboob, sideboob, and boob windows to get the job done, but this is not the full extent of the overt sexism, fetishism, or hypersexualization. Absorbing powers from other gods always results in a female character being thrown in the coffin where she is groped by slimy, ectoplasmic tentacles as she expresses discomfort while her body is often tortured and exposed for players. This happens regardless of perceived age: The first god appears to be about 9 years-old, yet you still see her panties, and another teenage-ish character is molested while the male god she is trapped with orgasms to her cries. Each of these scenes is proceeded by a sauna scene where clouds of steam strategically cover nipples.

I am, frankly, disgusted and embarrassed by this game and the playful nature it tries to assign to supernatural sexual assault and exploitation of prepubescent girls. It mars what could otherwise be a par grinding RPG experience, however over-complicated and silly it is at times. Whereas some developers joke about how many cups of coffee were consumed during development, I’m sure Compile Heart is keeping its tally on the number of tissue boxes and lube they consumed a secret.

Horizon Forbidden West Review: ‘An Early Contender for Game of the Year’

Ember Lab's debut game looks great, but is that it?
Games 1 year ago
8

More fun with friends (and strangers).
Games 1 year ago
9