It’s hard to believe that COMMAND & CONQUER is about to turn 25 years old. The first game became a fan-favorite for its fast-paced action and then-peerless presentation, but as the series evolved through the years, purists grew to miss the original formula. As luck would have it, the folks at Electronic Arts heard fans loud and clear, so they teamed up with Lemon Sky Studios and developer Petroglyph Games to reintroduce Command & Conquer to a modern-day audience. The result of their efforts is COMMAND & CONQUER REMASTERED, a revamped collection of the series’ first two releases that sets a new standard for classic game remasters. 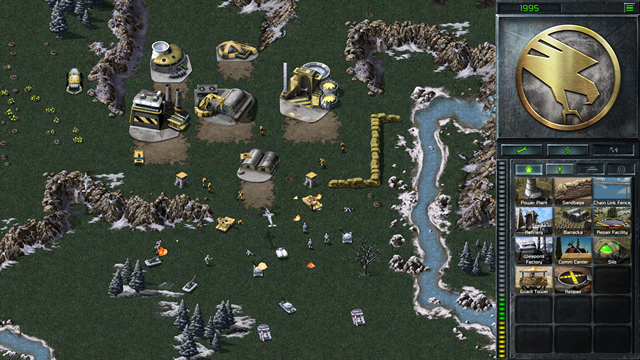 Command & Conquer Remastered bundles together the series’ first two entries: The original 1995 release Tiberian Dawn as well as its 1996 sequel Command & Conquer: Red Alert. It also packs in both games’ DLC and expansion packs — The Covert Operations, Counterstrike, and The Aftermath. All told, the collection offers over 100 campaign missions and over 250 multiplayer maps.

One of the biggest draws to C&C Remastered will be the game’s fresh new 4K-friendly graphics. The legacy visuals still look the same as most fans will remember, with buildings and units presented in all their pixelated splendor. However, the remastered graphics do an excellent job of retaining the games’ original feel while offering a suitable amount of modern-day fidelity. Even better, there’s no need to decide between the two options, as the graphic style can be swapped at any time simply by pressing the space bar.

The audio has been given an overhaul as well. C&C Remastered features 119 newly-revamped tracks, and several of the game’s most iconic hard rock tunes have been remastered with the help of original composer Frank Klepacki alongside The Tiberian Sons. The result of these combined efforts is outstanding, driving the action with crunchy guitar riffs and pulse-pounding drums. Better yet, fans can select which tracks they’d like to hear through the new Jukebox function. This feature serves as both a music player and a playlist editor, allowing users to customize which songs they hear while playing. 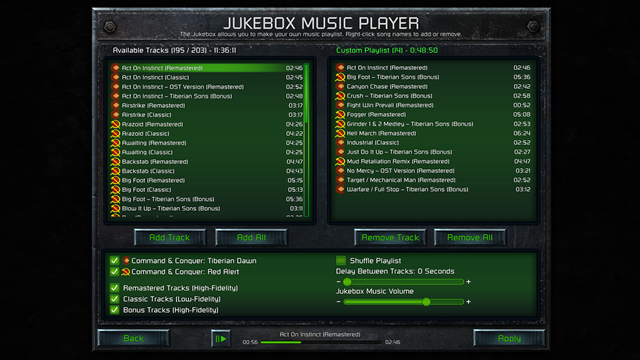 As strategy games go, Command & Conquer walks a fine line between action and thoughtfulness. There’s no need to pore over faction allegiances or politics here; instead, players typically need to focus on eliminating any nearby opposition. It’s a very action-focused sort of strategic experience, offering relatively quick matches with a high level of replayability. The pace may feel a little strange to players used to more elaborate or slow-moving strategy titles, but it’s always possible to adjust game speed through the options menu.

Both games allow players to choose between one of two sides, the GDI or the Brotherhood of Nod, as they battle for global supremacy. The plot is relatively light, and most story elements are outlined in delightful B-movie-style FMV cinematics. These cutscenes are pulled from the games’ console releases, but despite being upscaled for modern systems, they certainly show their age. Still, they’re charming, and the juxtaposition of new-age graphics and decades-old cinematics only makes the experience that much more entertaining.

There’s plenty to keep players busy after the main campaigns have been completed. In addition to three separate DLC expansions, there are several new and returning features meant to keep the action going. Chief among these is online multiplayer, featuring a vast selection of maps, a custom map editor, and the option to create custom game lobbies. There’s also the Skirmish mode, new to Tiberian Dawn, that allows for a single player to take on AI opponents in matches with custom settings. There’s even mod support, allowing the Command & Conquer community (who were instrumental in Remastered‘s creation) to put their own spin on the formula within Skirmish and Custom missions.

Command & Conquer Remastered Review | This Is How It’s Done 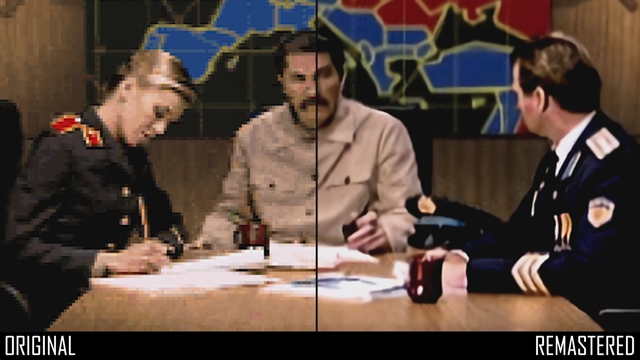 There’s very little in Command & Conquer Remastered that hasn’t been revamped. Both games have a new user interface, including a tweaked sidebar and a litany of customizable input settings and hotkeys. There are two different control schemes — Legacy and Modern — and players can pick-and-choose elements from between these settings to customize health bar display, unit queuing, map scrolling, and more. Extended resolutions are supported, including both 4K and ultrawide settings. The developers even tracked down Kia Huntzinger, the voice actress for EVA, to re-record the system’s voice lines.

Perhaps best of all is the fact that Petroglyph Games managed to pull off this remaster without a single hitch. I encountered no visual bugs, glitches, or slowdown of any kind. Even though all bets are probably off when it comes to user-created mods, I expect most will run without any noticeable problems. The only caveat here is that the gameplay is as it was in the original titles, and that includes the sometimes-wonky AI. Computer-controlled opponents are more than capable of surprises, but sometimes your own troops will have difficulty with simple tasks like getting to specific locations. Other times they’ll stand in place while getting bowled over by tanks. These issues will be familiar to longtime fans, but they don’t bring down the experience in any meaningful capacity.

The original Command & Conquer might be almost 25 years old by now, but its signature fast-paced strategic gameplay hasn’t aged a day. Remastered does exactly what modern-era collections should, offering old-school action with modern-day fidelity and loads of extras. This is a perfect example of remasters done right: The original gameplay remains intact, the upgraded presentation is flawless, and the added bonuses are tremendous. Put simply, your favorite Command & Conquer games are back and better than ever.

Light up the night.
Games 2 years ago

Some cars didn't quite make the cut.
News 2 years ago

Straight to the source.
News 3 years ago