Hellpoint review for PS4, PC, Switch, and Xbox One. It feels like Souls-likes are going to overtake battle royales as the most played-out genre. The amount of frustrating, low-quality pretenders to the Dark Souls crown seems to grow by the day. That’s not to say there’s no innovation left for the action RPG sub-genre. After all, just because platforming had Mario doesn’t mean we shouldn’t have gotten Sonic. However, using that analogy, the recently released Souls-like Hellpoint would be more like Bubsy.

Something is happening on a space station 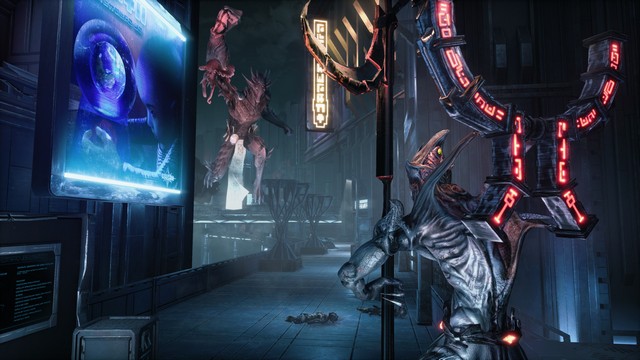 Hellpoint takes the Souls formula into sci-fi territory. You play as a clone fresh out of the pod on the massive space station Irid Novo. That’s about as far as you’ll get with the story. Hellpoint unfurls itself in one of the most infuriating ways I’ve seen in gaming.

You’ll read cryptic inscriptions and meet NPCs who hint at the plot without actually revealing it as your primary means of discovering the station’s secrets. It’s typical Souls-like fare, but here it’s even worse than usual. At least in From Software’s games, you have plenty of exciting environments to explore spurring your forward. Unfortunately, there are only so many colors of lighting you can throw in a space station corridor before it becomes monotonous.

It’s a shame that Hellpoint holds its cards so close to its chest when it comes to the story. There’s something interesting going on, but not so much so that it’s worth putting in the time to try and piece it together. It’s a setting that would have worked better with a survival horror game or any genre that didn’t focus heavily on repeated backtracking. 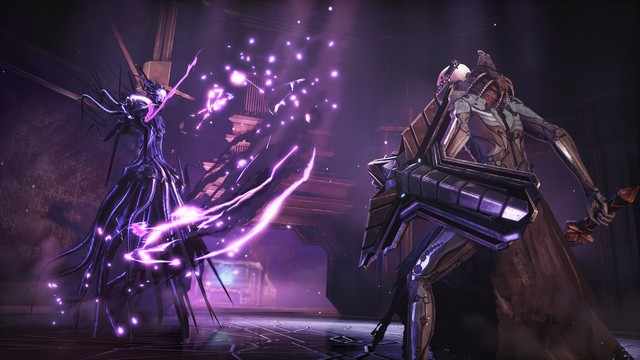 Hellpoint also emulates the level design of Dark Souls. Most areas fold in on each other and eventually lead to shortcuts to previous locations. This is useful because often, you’ll need to return to ground you’ve already covered after you get a particular key item.

Outside of the larger setpiece rooms, Hellpoint‘s environments are so sameish that you’re often forced to distinguish them by memorizing their colors and vague architectural cues. Of course, there’s no map, so you can get old school and draw one out yourself or just wander around until you happen upon the place you need to go.

You’ll get plenty of rewards for exploring, which is excellent. Extra items are hidden throughout the station, but the uninspired environments take away some of the anxiety and awe you should feel from the setting. 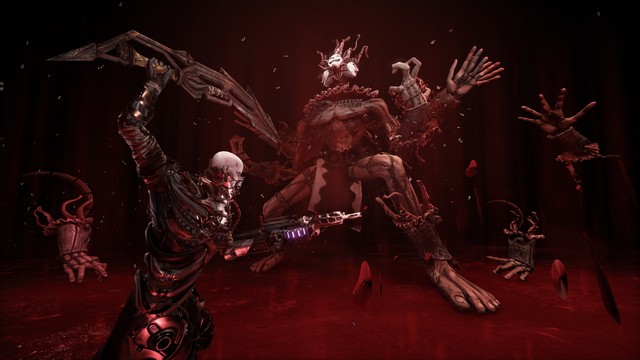 Instead of bonfires, Hellpoint has Breaches. Approaching these rips in space allows you to save and spend Axioms (think Souls) to level up. Unlike with Dark Souls, stopping at a Breach doesn’t respawn all the enemies in the game. However, you also don’t get a free heal at a Breach. Instead, you’re given the ability to recharge your Healing Injections (Estus Flask) by hitting enemies, which is your primary means of healing.

The healing system is a mixed bag. It encourages you to partake in combat instead of running by enemies. However, gating the ability to heal behind battle can lead to incredibly frustrating situations. It’s just a new version of the give-and-take of the Bonfire, but it doesn’t work as well because of one fact. Many enemies don’t stay dead regardless of whether you use a Breach or not. When you fight a foe, you’re usually just knocking it down for a bit. It’ll get up within 5-10 minutes like nothing happened.

Fast travel is also a complicated issue in Hellpoint. To fast travel with a Breach, you need to use a Synchronizer on it, then find another breach and do the same thing. The problem is, you don’t get very many of these items, so you have to be very wary about which Breaches to imbue this ability. This means you’ll probably find yourself in one of two situations. You’ll either horde Synchronizers until you beat the game, rendering them useless, or you’ll accidentally sync an unnecessary Breach that you never need to visit. 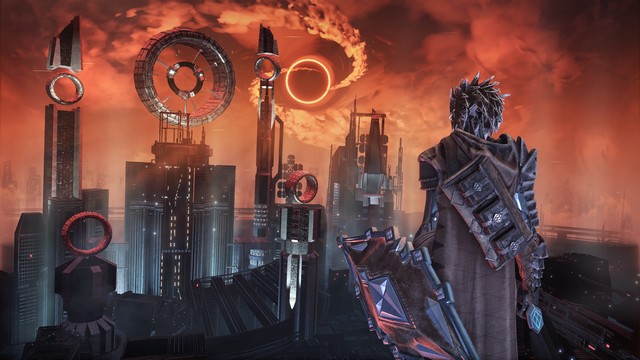 The issues with fast travel are made more evident by Hellpoint‘s Black Hole Clock, as certain parts of the station are only available during select times. This clock is located in the upper left of your HUD and marks the time aboard the station. You may notice at some point that Irid Novo orbits a black hole, and at specific periods during this orbit, things get wacky. Twice per station day, there will be a Hell Hour. During Hell Hour, you can pass through the ordinarily impenetrable orange walls and participate in a Horde event.

However, during Hell Hour, you’ll also encounter mini-bosses throughout the station. This happens even at the beginning of the game. So, you may find yourself taking on a foe that can one-shot you as part of a mechanic that isn’t explained to you in any way. This goes against the typical Dark Souls design of static enemy placement that allows the player to form a strategy.

With Dark Souls, learning where foes are and conquering an area gives you a feeling of accomplishment. In Hellpoint, you might die and power through an area only to come across an enemy that isn’t typically there that stomps you. The best games of this genre flirt with the line between fair and unfair but never cross it. With Hellpoint, that’s not the case, as you can perish to a foe just because you walked into a room at the wrong time. 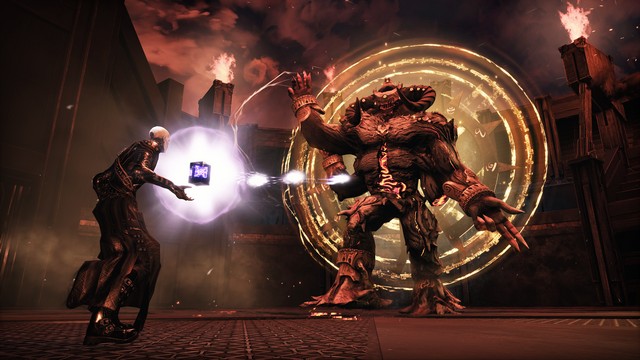 Combat in Hellpoint is alright. It’s not the best, not the worst. An interesting facet that’s unique to Hellpoint is that each weapon has its own abilities you unlock from using them. So, you may find a technically weaker weapon superior to a stronger one because of its moveset.

Like most Souls-likes, movement and animations feel a little floaty at times. Hellpoint isn’t nearly as bad as some of its peers in this regard, thankfully. However, you may sometimes find yourself in a bad position because a sprint didn’t cancel at the predicted time, or the camera might not be as cooperative as you’d like.

One thing Hellpoint didn’t need at all is platforming. Unfortunately, you can jump, and you’ll have to do so more than you’d probably like. Again, jumping isn’t terrible, but it can be imprecise. This is forgivable when you’re playing a game with a checkpoint system, but Breaches can be far and few between, and it is an absolute gut-wrencher when you miss a jump and get put in a position that kills you.

Bosses are appropriately grandiose but sometimes suffer from AI issues. A big fight might be thrown asunder when the boss just stops doing anything. Luckily, I never encountered a bug that worked against me with a boss. 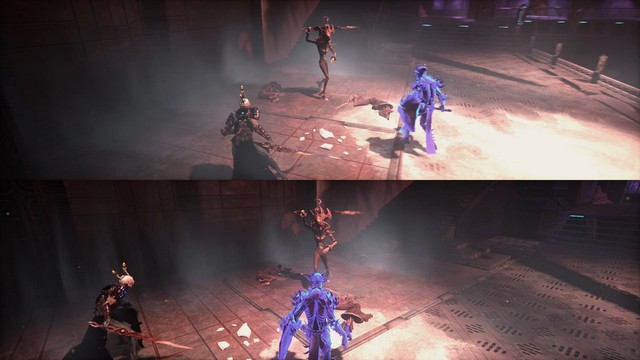 One of the biggest criticisms of Hellpoint as of writing is the lack of a promised feature. During the review period, co-op multiplayer was available, but as soon as the game launched, it was taken offline. A big draw to this game, one that could allow for some of its flaws to be forgiven, is that its designed to allow players to complete the entire game in co-op. Couch and online drop-in co-op are supposed to be available, and Hellpoint is even supposed to save a local player two’s experience so they can play the game on their own if they desire.

I’m not going to factor the absence of multiplayer at launch in the score, as the devs have stated that the functionality will be restored within the next couple of weeks. Whether it’s restored or removed, I’ll return to this review to add more critique as needed.

Hellpoint is a decent game with a confused design. It leans way too heavily into the Dark Souls formula instead of carving its own path. Unfortunately, this tends to amplify minor gameplay issues into major annoyances. At the same time, Hellpoint doesn’t stick with aspects that balance Souls combat, like healing at save points and generous fast travel.

I feel like Hellpoint would actually be a much better game had the devs not chosen to make it a Souls-like. Irid Novo is an interesting setting in concept. A traditional action RPG or survival horror game with a more explicit story would work well here. Unfortunately, the environments are at odds with the constant need to backtrack. Their similarities become more and more pronounced each time you pass through them. The lack of a map amplifies this even further. Even the most astute navigator will find themselves wandering around for the next goal now and then.

If you’re a big fan of Souls-likes and want to play a game that follows that formula fairly closely while introducing a few unique gameplay elements, Hellpoint isn’t a bad choice. However, the game lacks direction and polish, and it makes for a poor introduction to the genre.

Some people aren't happy about the rerelease.
News 2 days ago
8