A new Civilization has arrived, signaling a rapture for PC gamers who are once again immersed in the world of empire building and domination. I’m one of the many who has been absorbed by Firaxis’ latest 4X title, and my blurred memories of the past week serve as a reminder.

Civilization VI continues true to the heritage of prior titles by providing you with a wealth of options for setting up a game. Everything can be fine-tuned from the map type to a selection of nine difficulties and victory condition toggles. Leader choices include 19 options, each with a very distinct play style resulting from their perks, unique buildings and units. Once you've made your selections and begin a game, the strong similarities to Civilization V dissipate, revealing a surprisingly complete package.

A World Without Expansions

Firaxis Games' addition of Active Research has interweaved smaller, short-term goals into the experience. These function similarly to RPG quests in that they provide smaller objectives that are well worth your time. Objective completion will boost the research of a given Technology or Culture unlock by half, significantly reducing the number of turns needed to progress. This element of gameplay alone has had a huge impact on the turn-by-turn experience, ensuring that you are constantly having to make decisions and compromises.

Active Research is backed by the introduction of a Culture Tree. Every few turns you will not only need to pick and choose which Technologies you want to prioritize, but also Culture-oriented progression that affects military, religion, and more. This addition has had a very positive impact, most notably in the mid-game where Civilization V suffered from slow pacing. Advancement feels dynamic as your empire will vary drastically from others that you compete with; cookie cutter builds are simply not a thing anymore.

On top of these new gameplay elements, Civilization VI provides several attractive victory conditions. As with Civilization V: Gods & Kings, Culture victories are a valid way to approach the game, made more engaging by the new Culture Tree. Alternatively, you can race to land on Mars if you prefer Science, or take up arms and destroy your enemies if you are attracted to Domination. Subsequent playthroughs benefit greatly from the balanced and much more interesting Culture, Science, and Religion victory types.

Diplomacy is a mixed bag. The presentation of information is much better than in prior games, and A.I. leaders feel more like real players in that they aren't predictable. The problem is that each has its own hidden agenda that is very difficult to decipher. Small, seemingly inconsequential moves on your part can mean the difference between friendship and war. For example, you might find that a nearby faction admires your commitment to science and culture one turn, but once you build a Wonder they are enraged. You will also need to be very careful about how you move around the map and expand your empire, because even innocent unit scouting near a border or creation of a new city between your empire and another can cause hostility.

The bi-polar diplomacy in addition to the complexity of the new game system does bring with it some serious challenges. Lower difficulties are highly recommended for new players as nothing is worse than finding out after a few hours that you have absolutely no shot at competing. This level of challenge may be off-putting for some, but is well worth enduring to experience the game’s fantastic sense of reward. Victories, both large and small, invoke great emotion. Early on the game instills respect and a desire to win.

Civilization VI’s visual style received some negative attention when the game was initially announced, but it was largely undeserved. Landscapes are colorful, decorated with well-defined geography. Units have true-to-life animations that are dynamic, reflecting unit health and defeat through a variety of outcomes. The graphics are particularly impressive toward the late game when districts are fully developed; city skylines appear similar to SimCity, but with a vast world surrounding them. Though, there are some incredibly long loading times when loading into a game that test your patience, but once you’re in a game it’s a non-issue. 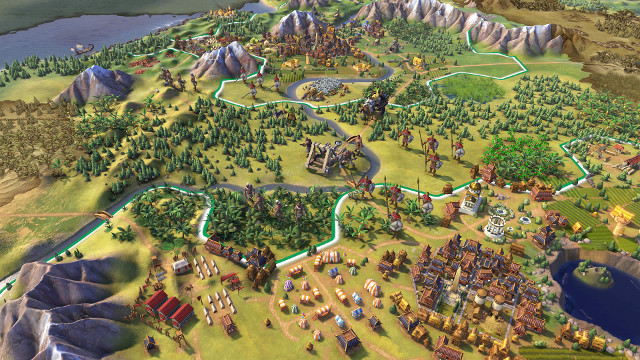 These visuals are put on full display with the new Districts system. Instead of spamming Builder improvements around cities, you will be encouraged to selectively choose where to place improvements as Districts eat up a single space. Districts are required to create certain buildings that are thematically tied, meaning that your cities will grow to include individuality and a greater sense of development.

For example, the Campus is Science oriented and can house Libraries, Universities, and more. Meanwhile, the Harbor requires a pool of water and is where Lighthouses, Shipyards, and Seaports are constructed.
The Districts system is visually impressive in that it extends the scope of your city beyond its initial space. It’s also a great gameplay element as it requires you to determine which cities will specialize in particular elements of your empire; you may want to construct a military Encampment near your front border, while the Commercial Hubs and Industrial Zones should be your backbone. The potency of Districts are impacted by tile resources, so there is a heavy element of strategy that it introduces.

The game’s finely tuned game systems are demonstrated with great results in multiplayer. Traditionally, Civilization multiplayer is a niche and often unpleasant experience, but not this time around. It is well-tuned to provide a concise but epic, competitive but fair mode of play that is worth revisiting more than once. For players who prefer social games, this is a huge win for Civilization VI that results in even greater replay value. 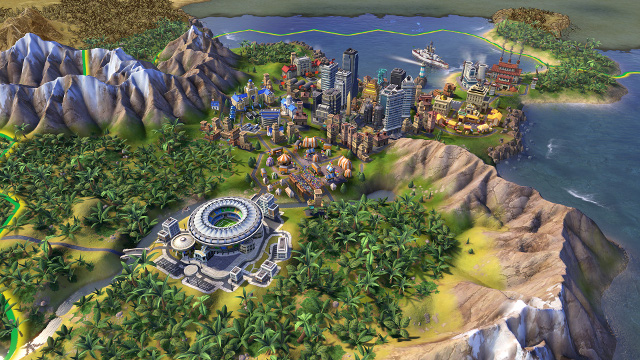 That isn't to say that Civilization VI is perfectly balanced. In-fact, there are quite a few exploits in the game at launch that can and have been encountered both intentionally and unintentionally. Factions also have great disparity in terms of effectiveness, leading to some leaders being overrun in short order.

But given Civilization VI's ambition and scope, what's here is impressive. Equipped with 19 factions and a much more attractive selection of victory conditions than prior games, Civilization VI is a highly revisitable game that is capable of hundreds of hours of logged play time for the average player.

Civilization VI feels complete in a way that no Civilization in before it has felt without the inclusion of expansions. This is a tremendous achievement that not only means that the base package is recommendable to even the most die-hard fans, but could become the best iteration of the franchise we’ve ever seen once it receives post-launch support.

This is a captivating game, one that consumes your time and gives back more than you put in. It’ll test your ability to make sound decisions, and anticipate the future. While diplomacy and numbers tuning will be required to combat some of the frustration that the game brings, this is yet another outstanding 4X game from Firaxis Games that will undoubtedly become one of the most popular PC titles for the years to come.

A touching moment.
TV 6 hours ago

A holy reunion?
Games 6 months ago