It makes me feel old when I remember that it’s been five years since The Elder Scrolls V: Skyrim released. I still remember playing it for my first time during Thanksgiving week, thankful that I got a few days off from school. Honestly, it took me a while to become immersed in its world, but once it captured my attention it didn’t want to let go. I would spend more than 60 hours playing it during the first couple weeks after launch, and what I remember most are all the interesting sub-stories in the game. It wasn't necessarily the graphics or presentation that moved me, it was how tangible the quests were. I couldn't get enough of them.

To celebrate its five year anniversary Bethesda has released an updated package for Skyrim. Titled The Elder Scrolls V: Skyrim Special Edition, it's a renovated version of the original game that includes DLC and mod support for consoles. It doesn't fundamentally change the game, but it doesn't really need to. Instead, it brings it up to speed with modern expectations, leveraging new hardware to get the most out of the experience, and as you might suspect it's a winner.

The story structure is just as it was in 2011, so as with the original release initial impression aren't great. You may find yourself disinterested for the first half hour, wondering how you enjoyed the game in the first place. Character models are still rough around the edges, and have washed out faces. This is particularly evident during the character creation process, which pushes the camera far closer than you'd ever want to.

It isn’t until you escape into the outdoors that this Special Edition package reveals its true colors. For players who haven’t played the PC version on Ultra settings before, the endless sea of foliage is an eye opener. A higher draw distance along with increased texture quality makes Skyrim a much more beautiful place. New effects like volumetric god rays and screen-space reflections make the image pop in a way that makes the game appear as if it's a current generation game rather than a remaster. This pairs well with the media sharing functionality of the PS4 and Xbox One, as there are plenty of great places to take screenshots.

Perhaps the greatest benefit to the console versions is the reduction of pop-in. This was an issue that made exploring Skyrim less than preferable on the original version. This time around objects load at far distances and for the most part you have to look for the pop-in to spot it, instead of it appearing right before your eyes.

Outside of the character models, Skyrim has aged surprisingly well. It not only looks great, to a point where it can compete with many modern open-world titles, but it feels good to play on either keyboard & mouse or controller. The user interface is still pretty and intuitive, too. With this in mind, players who have a tendency to become absorbed in Elder Scrolls are likely to find themselves re-immersed by this timeless fantasy world.

Game of the Century Edition

The inclusion of Skyrim’s add-ons is expected, but a nice touch that helps to beef up the game and offer something for returning players who may have missed out on packages like Dawnguard or Dragonborn. These add-ons are spectacular, and benefit from the visual upgrades outlined above.

The real winner here is mod support. Although nothing new for PC gamers, mods are a huge boon for any Elder Scrolls experience. There are already dozens of mods available on the store for PS4 and Xbox One (Xbox One has more), ranging from minor conveniences, to alterations worth tinkering with even if you uninstall them moments later. Some can have a drastic effect on the game, outright making the game feel different to play. Though, these are limited by only being able to use internal assets, so they will never compare to the PC’s vast options, but at the very least you can install them painlessly while knowing that they will likely work without fault. 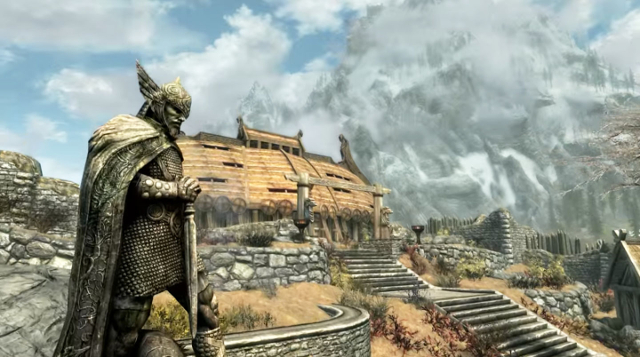 And then there's the audio. The PS4 version has seen a slight increase in audio fidelity, resulting in an incredible auditory experience whether you're out exploring the wilderness or speaking to an NPC. For some unknown reason the Xbox One and PC versions are not only unequal in this regard, but their files have been compressed to a point where the quality suffers. This is an element that will have a larger effect on some consumers than others, and is worth taking into consideration.

Even then, the incredible writing and voice acting come together to deliver superb performances that stand up to today's expectations, serving as a reminder that Skyrim was a game ahead of its time.

It's amazing that after five years The Elder Scrolls V: Skyrim Special Edition can manage to fit right in with the best of the current generation. Its cold wilderness appears breathtakingly beautiful, and has been expanded on console with the introduction of mod support. Though, this package makes much more sense for console gamers who previously didn't have a way to enjoy the experience with the benefits of new hardware; on PC you don't get much for the inflated price. Nonetheless, any excuse to head back out into Skyrim and become consumed by its sense of wonder and enchanting sub-stories is a good one.

Improbable, but not impossible.
Games 6 hours ago

A frustrating way to start a game.
Games 4 hours ago