Ronimo Games is back with the newest game in the Swords & Soldiers series which originally launched in 2009 on WiiWare and later released on PSN, PC, Mac, and iOS. Swords & Soldiers II is a real-time 2D side-scroller strategy game with great artwork and a huge fun factor. Although it shares an art style and general gameplay mechanics with its predecessor, there have been numerous game mechanic tweaks implemented that vastly improve the battle experience as well as two completely brand new factions to play as.

The Viking Faction is still the primary faction in the overall story, which includes one, single-player campaign mode with 20 missions unlike the original game which included three separate primary campaigns. The other two factions you encounter throughout the game are the Demons and the Persians. Each faction comes with its unique set of characters to perform all manner of tasks in battle from the workers who gather resources, to the foot soldier units. As you continue through the game you can begin to combine units from other factions with your own, leading to some very interesting battle combinations.

The Vikings have a polymorph spell you can unlock that turns opponents into sheep, and if you use it in conjunction with a lightning bolt spell, it turns the enemy into a piece of meat that can be used to heal one of your soldier units. There are Viking support units called meat throwers who follow along other units and literally just throw meat at them in order to keep them regenerating health as they are attacked.

If you happen to have Demon units, they can build mana buildings where other units can be sacrificed in order to restore mana points. They are also the only faction with a call-to-arms spell that can turn their workers into bonus troops temporarily in case enemies make it to your side of the map. The advantages to using Persian troops is that they can seamlessly turn the home base mine from a gold mine to a mana mine, and their basic soldier units are self-healing. These are only a few examples of how each faction has unique elements that can be fun to play around with. 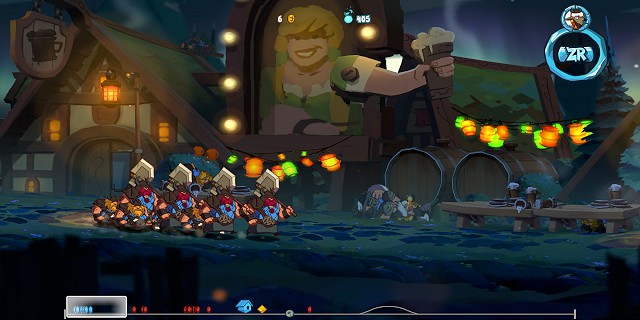 There is also plenty to do in Swords & Soldiers II aside from the main campaign. While navigating the map, there will be random encounters with roaming enemies known as open battles. The map and the way these enemies engage reminds me of the roaming enemies in Super Mario Bros 3. Once engaged, you enter into battle with an enemy AI faction that is randomly generated so you never quite know what mix of units you’ll be going up against. Since these events occur periodically as you progress through the story, it’s a great way to hone your battle skills.

Another great way to get some practice time in is playing Skirmish mode which allows you to generate AI troops as well as your own in order to create custom battles. You can play against friends in Skirmish mode as well, and if one player is using the GamePad while the other uses the TV, it’s possible to have far more surprises when playing local co-op. There is also a mini-game mode based around each faction's super spell that is helpful in getting the hang of executing them.

Ronimo Games has also rebalanced certain elements of the game to make multiplayer and general gameplay more efficient. The first major retool was of the in-game economy system which gives each opposing force a gold mine/mana mine near its starting point in battle. Randomly during battle, blocks of gold and other resources will parachute in, allowing players to compete over them and adding another incentive to gain the upper hand.

The other improvement is the reduction of the cooldown times for magic abilities, buildings, and faction units. You can buy all of the ground troop units you can afford at once to create a sizeable squad which makes the rebalance of the economy system even more important. If you steal enough random loot drops from the other team along with having your workers consistently mine resources for you, overpowering opponents shouldn’t be difficult at all. 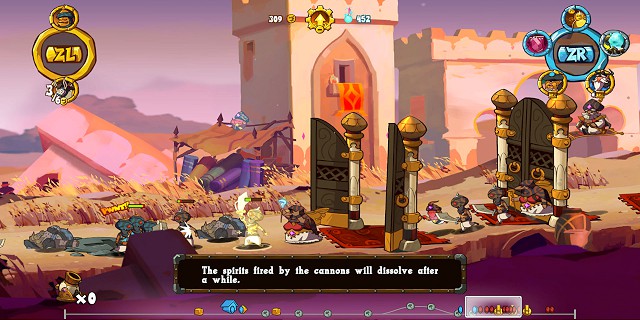 Playing Swords & Soldiers II on the Wii U is a great example of how beneficial the Wii U GamePad can be. Although the game can also be played with the Wii U Pro controller using the GamePad allows you to toggle seamlessly between using touchscreen based controls and the GamePad's built-in controls. I found that in the heat of battle the touchscreen-based controls helped eased the pressure of building units and navigating the battlefield.

If you want to get an overview of approaching troops, you can just slide your finger along the timeline at the bottom of the touchpad and move it wherever you want or tap your finger on the area of the battlefield you want to see and be there in an instant. For someone a bit newer to a real-time strategy game like this, being able to have all the options you need in battle a quick tap a way can be very useful.

Swords & Soldiers II will be a great addition to the Wii U when it releases this year. It’s got charm and a fun factor that makes even the more difficult battles well worth your time. So far it looks like the initial launch will be on the Wii U but hopefully we’ll see it on other platforms later, on because this is a well-designed 2D strategy game with plenty of charm.

Here are all of the bug fixes and new additions.
News 2 months ago
6

Blizzard and player reactions to a difficult launch day.
Originals 4 months ago