Tera Patch Notes 81 | What’s in the Illusions of Perdition update?

The free-to-play MMO Tera has received a brand new update, with the Tera patch notes 81 surfacing with a bunch of new changes that have been made to the PC version of the game. This patch follows the recent ‘Suckerpunch’ update for the PS4 and Xbox One, though the PC-only ‘Illusions of Perdition‘ update different features.

In the new Tera update, players will be introduced to a brand new dungeon in the form of the Gossamer Vault. Featuring two unique bosses in the form of the Hellgrammite and the Gossamer Regent, this dungeon will be for 5-player groups and will be accessible from level 66. 290 Adventure Coins will be required to take on the dungeon, while loot boosts of 50%/100% are available to 4- and 5-player groups.

In terms of loot, the Gossamer Vault potentially offers skills advancement for the entire group, a Transcendent Mask, and an Accessory Amplified I among other things. The dungeon has been designed for those with an item level of 453. There are eight achievements to potentially unlock by completing the dungeon, though these do not offer any rewards of their own.

Outside of the dungeon, the Illusions of Perdition update also offers a new partner system. Players who have reached level 66 or above can talk to Loomey the Wandering Scholar in Highwatch in order to begin the companion discovery quest, in which they’ll be able to find their new partners. Partners are types of servants that players can summon, with Cocomin being the first partner that players can unlock.

The update also becomes with a variety of new changes and fixes, all of which can be read below in the official Tera patch notes 81: 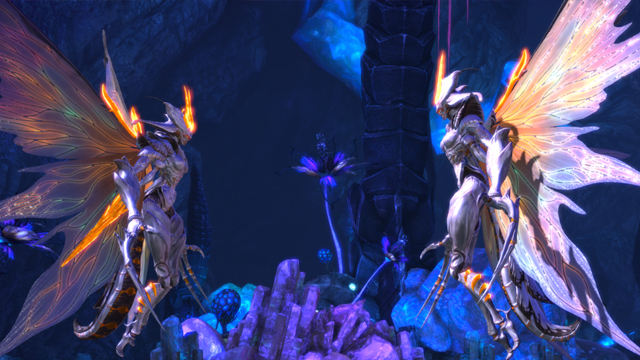 This brand-new dungeon plays host to two unique bosses. Engage the colossal Hellgrammite, overcome the security systems and then confront the Gossamer Regent who will protect her precious egg with her life.

In this dungeon you can unlock the following achievements (which however do not offer any item or title rewards):

Already reached level 66? Then you’re free to seek out your first partner. Talk to Loomey the Wandering Scholar in Highwatch to start the quest of discovery for the partner system.

After completing the quest you’ll receive a license for your first partner: Cocomin!

Partners are a new type of servant that you can summon. They’ll follow you around the world, granting you an additional buff for you to activate.

Partners can be earned in various ways – either from the quest, from licenses or by combining together existing pets.

Every partner you receive has two skills which vary in strength and effect.

The bond skill is an active skill which you can use to have your pet grant you a buff. Its strength and duration depends on the strength of your partner’s fellowship to you.

The gifted skill is a passive skill which is randomly determined when you use the license. This is automatically used by the partner when the criteria are fulfilled. Talent skills can be re-rolled if you have a Partner Gifted Skill Change Voucher.

When you use a license, you’ll receive a level 1 partner. Reaching a new level increases your partner’s fellowship to you. Partners can reach a maximum of level 10 and fellowship 50.

Your partner can earn experience points towards the next level by using another partner you no longer summon as the raw material. The fellowship of the recipient increases proportionate to the level of the sacrificed partner.

The level of fellowship has an impact on the strength and duration of bond skills, so it’s worth keeping an eye on this level and upgrading your partners wisely.

In addition to the new active and passive skills, partners can also adopt the abilities of existing pets. Simply choose the option in the menu to transfer abilities such as pet pocket or auto-gather from an existing pet onto your partner.

Partners are also more adept at automatically using potions than pets. If your partner has adopted this ability, you can set the conditions for when each type of potion should be used per potion type!

The companion list displays all your available pets and partners. You start off with 10 slots in the list, and you can use Companion List Expansions to increase this up to 100.

With the new patch, you’ll also be able to add multiple pets of the same type to your list, which is of particular importance now that you can combine and develop them.

In order to increase a pet’s level, you must feed it with items. You can use an assortment of unneeded items as fodder, including various enchanting materials, crystals and niveots, right through to relics and halidoms.

Starting with patch 81, you can also obtain pets as rewards in instances such as the Gossamer Vault. Collect Legacy Essences and exchange them for a pet of your choice. Feed items to your pet and watch it grow, then fuse it with another pet for a chance to get a new partner!

By fusing together two pets, you can get a different pet, or with a bit of luck you might even produce a partner. The higher your pets’ level, the greater the chance of receiving a partner.

It’s also possible to continue developing a pet after it has reached level 10, but for that you’ll need an Evolution Core. The development may fail, however, in which case your pet’s level will drop back down to 9.

Caution: When fusing two pets or developing a pet beyond level 10, the resulting companion will not have any of the skills the original pet(s) had. Make sure you transfer their skills to a partner before attempting to fuse or develop them.

Is your wardrobe full of stuffy old costumes and decorations you no longer wear? From patch 81 it’ll be possible to transform vanity items into tokens which can be exchanged for something you DO want.

You’ll receive a certain number of recycling tokens depending on the type; a costume is worth more than a facial decoration, for example.

These items can be converted into tokens:

Right-click on the tokens you’ve earned for recycling and exchange them for one of five chests. Each chest contains a certain type of item, such as a costume or weapon skin. Virtually anything is possible when you open one of these chests, and you’ll receive an item at random from a huge list of possibilities! It’s even possible that you’ll get your hands on an exclusive costume. More details can be found further below.

Here’s how the individual chests work:

The chests you pick up with tokens can contain virtually any cosmetic item. But that’s not all – it’s even possible you’ll get your hands on a rare weapon skin or costume that isn’t available anywhere else.

For example, these costume variations are only available from the new system:

Please note: Even if a costume is only available for Elins or female characters, any character may receive it on opening.

New options have been added allowing you to hide certain interface elements automatically when in combat. You can set these options for the following components:

Minor adjustments to gold and experience points for guild missions