Elements are an important alternative damage method in Dauntless as they allow players to add additional status effects and damage bonuses to their weapons. Each element type has its own series of weaknesses and strengths for players to take into account. In this guide we will dive deeper into all the Dauntless elemental weaknesses, as well as discuss the various strengths that each element offers. We’ll also talk a little bit about the different status effects that some of the elements can offer, so that players can understand them all equally.

There is a total of six elements that players will encounter in Dauntless. As stated above, each one comes with their own elemental weaknesses and strengths, making it important for players to understand them. To make this guide easier to follow we have broken down each element into its own section. This should make it simpler to follow and understand, so that Slayers know exactly what they need to know when it comes to elemental weaknesses.

There are four main elements to take into account in Dauntless. These elements include Blaze, Frost, Shock, and Terra. Finally, there are two additional elements that Slayers will gain access to as they progress through the game. These elements are Radiant and Umbral, which represent light and darkness. We’ll go over the basic elements first, and then touch on the more exotic elements later in this guide. 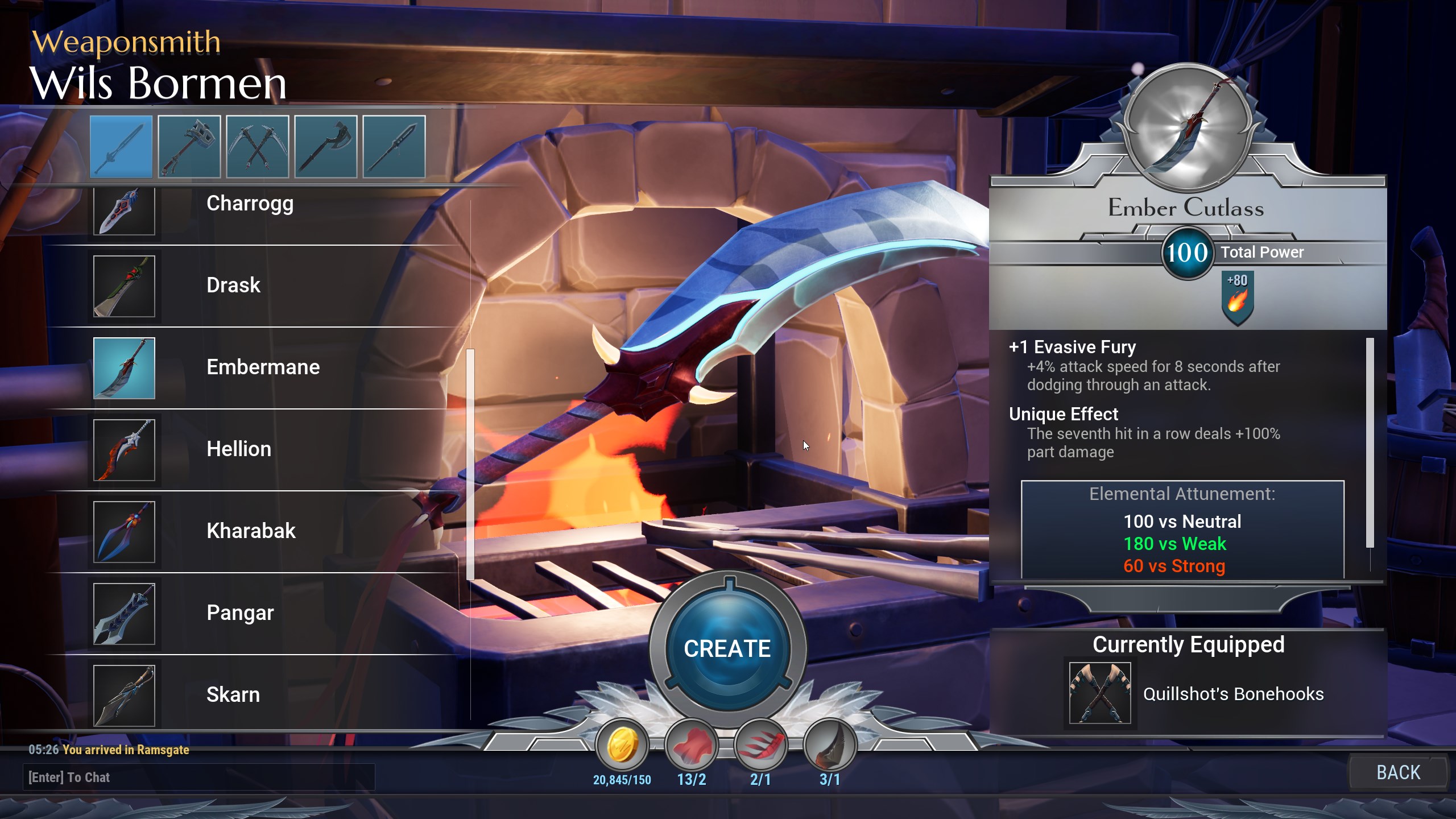 The first element on our list, Blaze is the aetheric element of fire. Blaze Behemoths are natural conductors for heat and fire and can be very difficult to take down. However, Blaze armor and weapons offer some very useful status effects and additional damage boosts.

When utilized, these weapons will also grant Slayers an additional ability to set a target on fire when attacking it. This status effect deals damage over time, burning the target. It is important to keep in mind that Blaze attacks work the same for Slayers as they do for Behemoths, so you’ll want to dodge roll as much as possible to put out the fires if you find yourself engulfed in flames.

Blaze armor itself is extremely handy against Blaze Behemoths, negating many of the burning effects these creatures use in their attacks. However, armor that is imbued with the Blaze element will be very weak to Frost Behemoth attacks. Because of this elemental weakness, players will want to avoid using Blaze armor during hunts against Frost Behemoths. 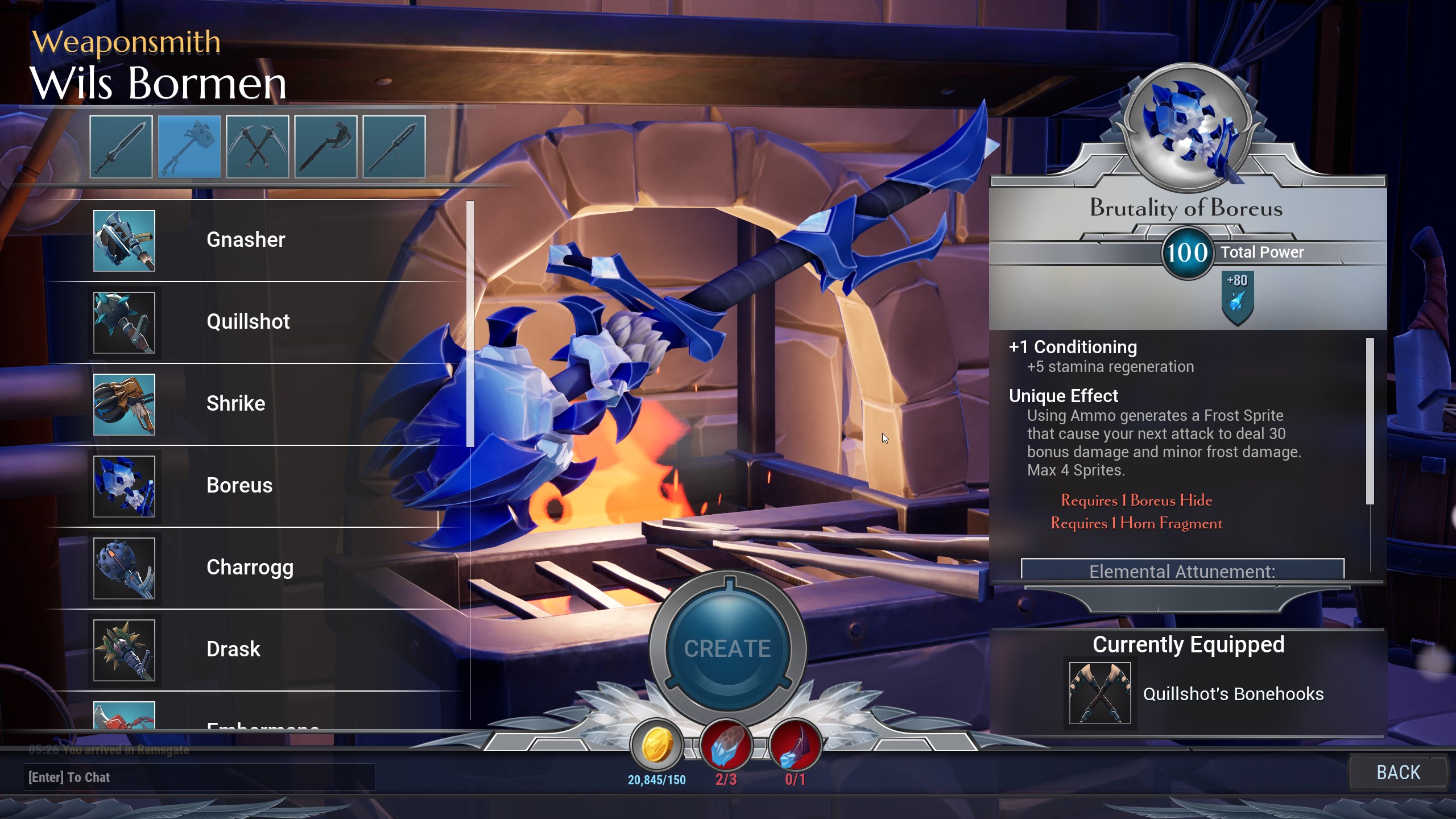 Next up is Frost. This is the aetheric element for ice. Like Blaze, Frost is one of the four basic elements that players will need to master in Dauntless. The various weapons, armor, and Behemoths that players will come across for this element build off of the power of ice and snow, freezing and slowing those that it touches. Frost weapons are very handy for slowing down fast-moving Behemoths, though there are some elemental weaknesses to take into account here.

Frost weapons themselves are extremely strong against Blaze Behemoths, thus making them the best items to take in with you for hunts or patrols involved Blaze imbued creatures. As stated above, these weapons can slow down enemies by freezing them slightly, and it is a perfect way to even out the odds against faster moving Behemoths.

As far as weaknesses go, Frost armor is very weak to Blaze Behemoth attacks. We’d highly suggest steering clear of using Frost-based armor when going up against Blaze Behemoths, as you’ll likely be walking into a match that you can’t win. An important note to keep in mind when utilizing Frost items is that Frost Behemoths can freeze Slayers using Frost attacks. However, Slayers will only be able to slow Behemoths down versus being able to freeze them completely. 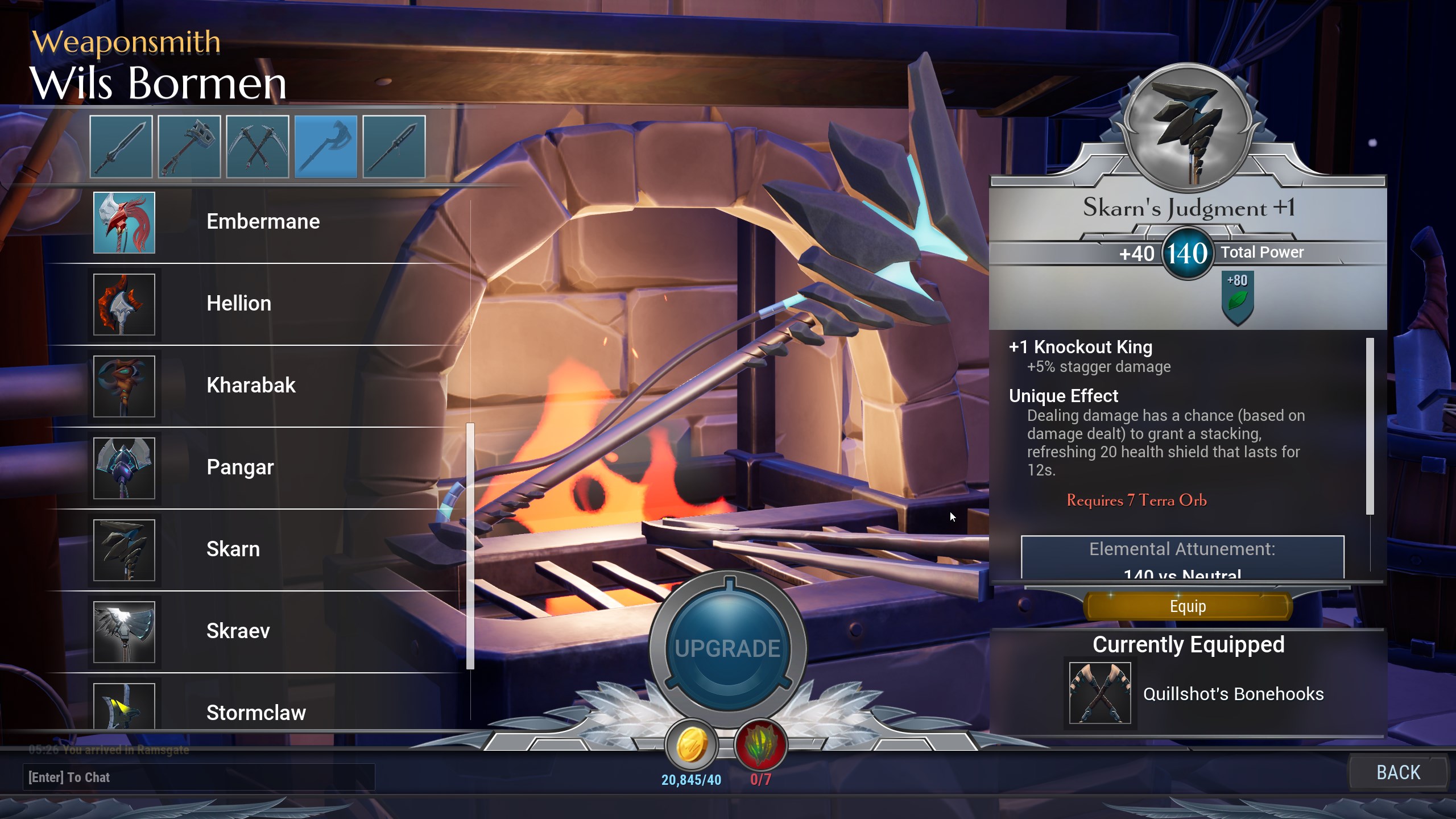 Terra is essentially the aetheric power of nature or earth. Many of the Behemoths and items found in this elemental class will feature a heavy emphasis on defense. There’s no real unique status effect here, though many of the weapons available here can offer additional protection via shields or additional health effects.

Fortunately, you can always utilize another type of armor against Shock Behemoths, such as Shock or Neutral armor. While not necessarily an element, Neutral gear has no elemental weaknesses or strengths, which makes it an easy candidate for just about any hunt that you take on in Dauntless. 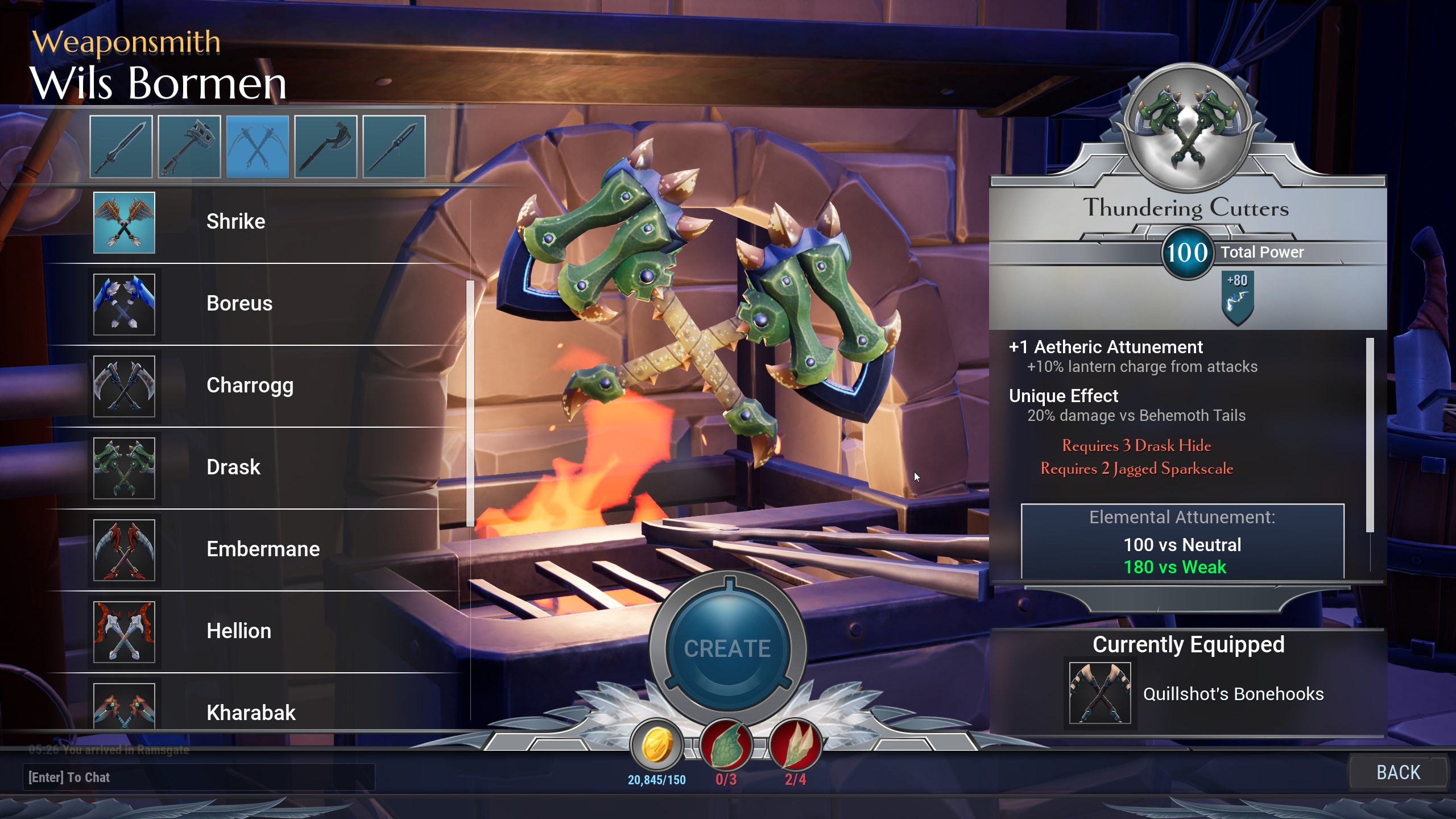 Finally, we come to the last of the four basic aetheric elements in Dauntless. Shock is the aetheric element of lightning. When used against Behemoths, Shock weapons can slow the creatures down by stunning them in the middle of attacks, basically staggering them and giving players an extra bit of time to deal damage, heal up, or complete other tasks like reviving an ally.

When it comes to weaknesses, though, Shock armor is extremely weak to Terra Behemoths. Slayers will want to make use of another elemental armor or rely on their Neutral armor if they find themselves facing off against Terra Behemoths. Keep in mind that Shock Behemoths can block Slayers from being able to use items when they use Shock-based attacks.

Now that we’ve discussed the four basic elements, let’s talk a little bit about the final two elements that players will encounter in Dauntless. First on our list is Umbral. This is the aetheric element of darkness. It’s primary weakness is Radiant-based attacks, which means wearing Umbral armor while facing off against a Radian Behemoth is almost always going to end in bad news. When it comes to weaponry, though, the Umbral imbued weapons available in Dauntless are by far the strongest against Radiant beasts, making them ideal for use in Radiant hunts and patrols.

While many might expect these two elements to have some unique status effects, neither do. Instead, Umbral and Radiant traits are all tied specifically to the weapons and armor that you utilize from these two elemental categories.

Now that you understand the different elemental weaknesses and strengths for each aetheric element in Dauntless, you should be able to better utilize each element to make the most of its abilities and options. Of course, Neutral armor and weapons are also always an option if you’d like to avoid the extra complexity of the elemental weapons and gear, though we’d highly suggest on sticking with Neutral gear if you feel comfortable doing so.

Elden Ring Bloody Finger Yura Locations Questline: Where to get His Armor and Weapon When He Dies

The Bloody Finger Hunter Yura questline is one of the easiest to mess up in Elden Ring. It’s easy to…
10 months ago

Halo Infinite has five types of weapon ammo: kinetic, plasma, hardlight, shock. Each of these damage types is strong and…
Games 1 year ago

Call of Duty: Vanguard is out, and we’ve started the annual tradition of finding the best weapons in the game.…
Games 1 year ago

Biomutant: Why are my guns and melee weapon attacks so weak?

Get stronker.
Games 2 years ago