If you want to become King of Ireland in the tutorial campaign of Crusader Kings 3, we’ve got the info you need to get there. We’ll show you what you need to do to establish the Kingdom of Ireland and where to go from there. 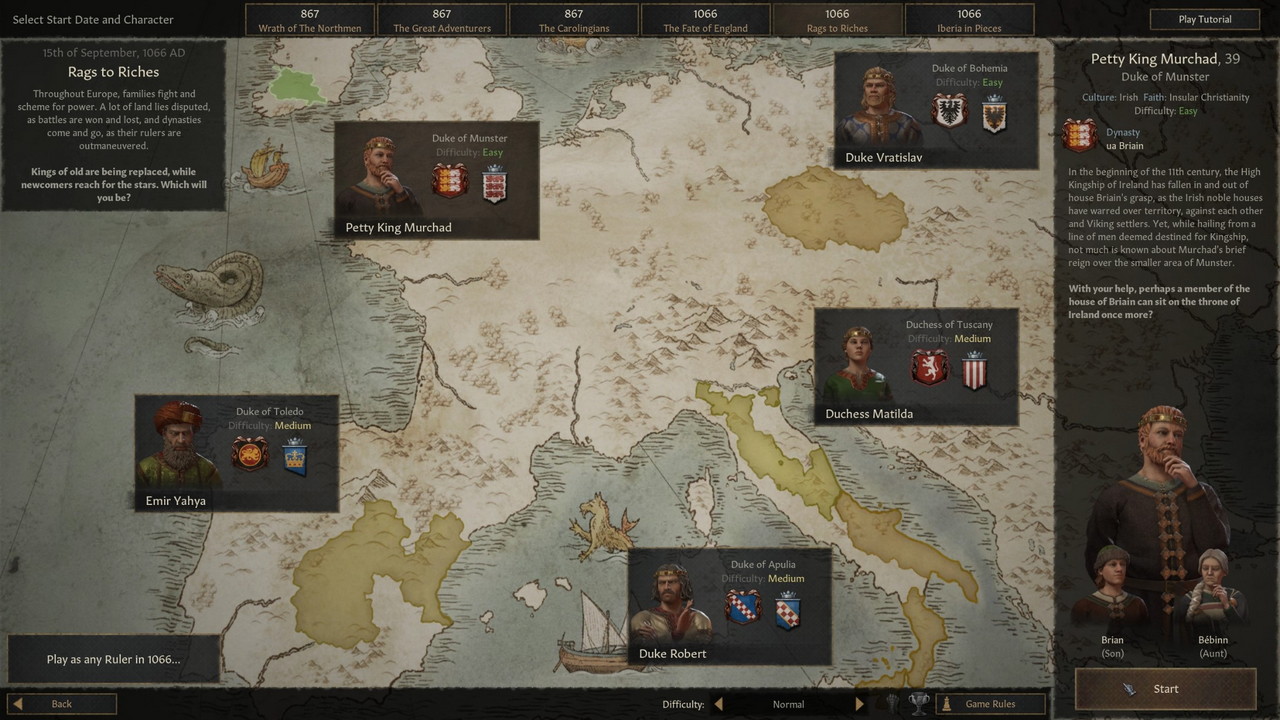 You start the tutorial campaign in a pretty strong position. Ireland in 1066 is relatively isolated from the volatile situation in England, and you’ll only have to worry about your neighbors early on in the game. You start as Petty King (Duke) Murchad mac Donnchad of Munster. Your Duchy is rivaled only by Connacht in power and resources in the early game. The surrounding Earldoms are ripe for the picking.

To reestablish the Kingdom of Ireland and become High King, you must:

You get a decent head start on the requirements from the get-go. At the start of the playthrough, Petty King Merchad mac Donnchad controls:

This territory will remain your capital and base of operations throughout this scenario, so familiarize yourself with it. 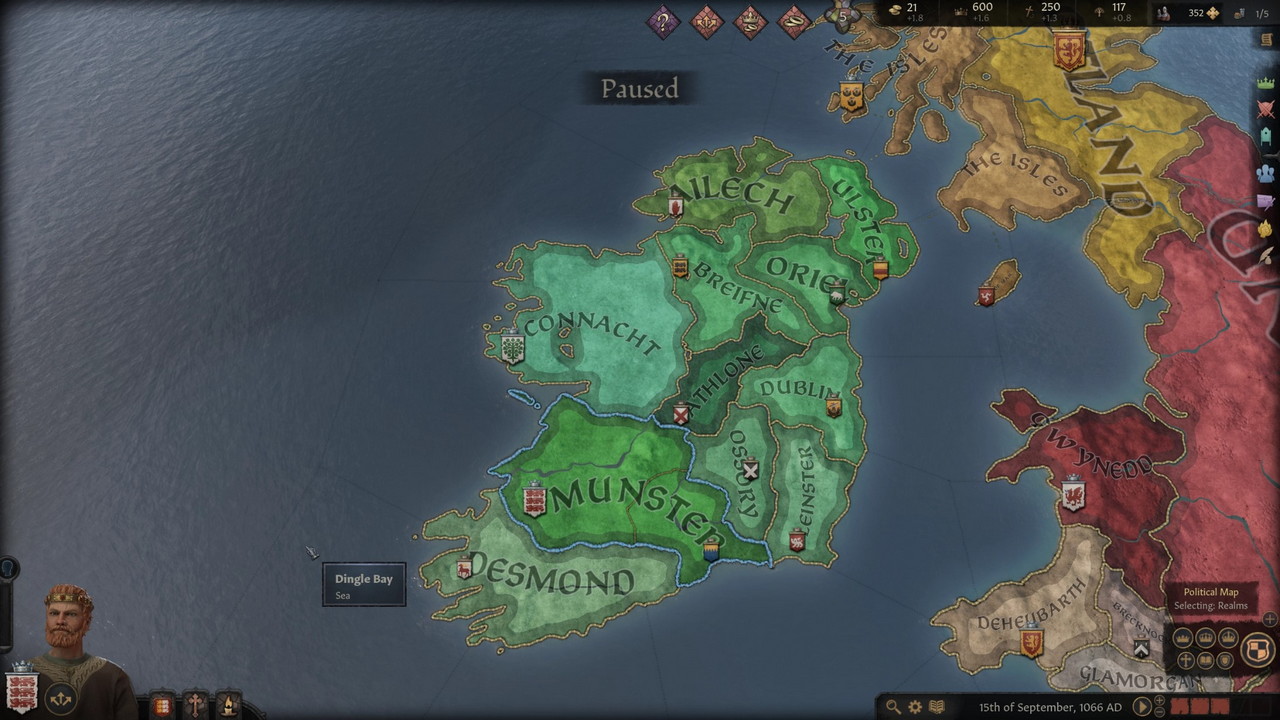 The safest route to reestablish the Kingdom of Ireland is to play the long con. Poor Murchad may become King of Ireland, but he almost certainly won’t live long enough to unite the isle. Unfortunately, it just takes too long to fabricate claims and conquer territory. Instead, you’ll want to quickly meet the requirements needed to establish the title and rely on diplomacy and scheming to conquer the rest over time.

You’ll want to establish the title of King of Ireland as early as possible. One of the biggest obstacles during this playthrough is going to be that you’re stuck with Confederate Partition for a while. This splits your Titles equally amongst your children after your death. If Murchad can become High King of Ireland before he dies, his heir will inherit that title, and any other titles inherited by his siblings will remain vassals instead of becoming independent. As long as you don’t form a second kingdom (something that is beyond the purview of this guide), you will still control the Irish throne, even if Duchies and Counties are split among heirs.

A key thing to remember is that you want to be stingy with your titles early on. Murchad’s Petty Kingdom is only a Duchy. If you grant a Duchy to a vassal, it will put them on the same level as you, and they’ll become independent. So, until you establish the Kingdom of Ireland, only grant Earldoms or below.

You’ll also want to quickly switch over to Limited Crown Authority in the Realm menu. A big goal for you should be to focus on the Royal Prerogative cultural innovation right off the bat. It’ll take around 55-56 years to research, but you want to get to High Crown Authority as soon as possible. This’ll prevent awkward situations that make you lose land from occurring. For example, during my playthrough, the Duke of Ulster’s heir was the Duke of Mercia which means I would lose control of that Duchy after his death. This cost me a few wars I wouldn’t have had to fought otherwise.

Your opening move should be to marry the woman that’ll give you the strongest alliance. Do the same with your son Brian. You can then press the one Du Jure claim you have, which will let you conquer the Earldom of Desmond. You shouldn’t have to call in your allies for this fight as Earl Muiredach mac Carthach of Desmond only has around 250 troops to deal with at the start of the game.

After conquering Desmond and consolidating your rule, you’ll want to set your sights on:

If you can take control of these four Earldoms, you can form the Duchy of Leinster, and you’ll have met the qualifications needed to establish the Kingdom of Ireland. However, this is a feat easier said than done. You can also just go willy-nilly. If someone in your court has a claim to anything in Ireland, press it. Just make sure that they’ll remain your vassal if you do. 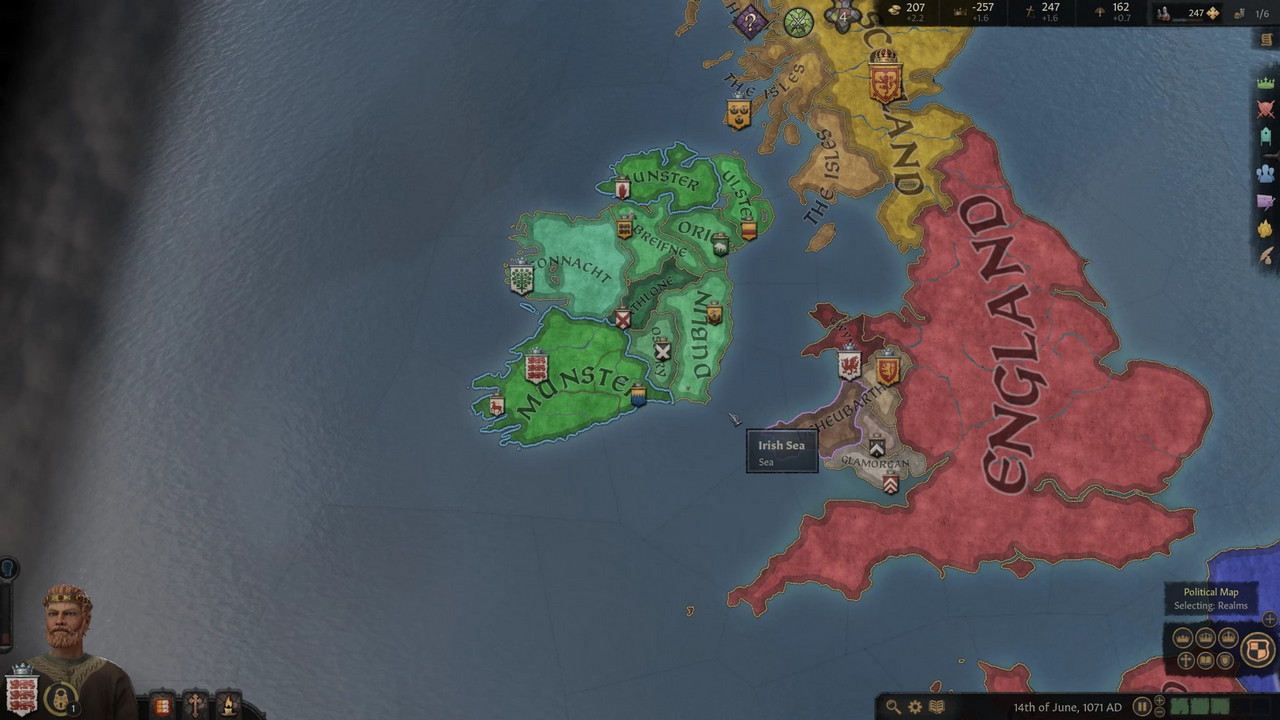 The trick to forming the Kingdom of Ireland in Crusader Kings 3 early on is to take the required lands before they have a chance to build a web of alliances. When you begin the campaign, none of your targets should have any major alliances. So, if you can quickly fabricate claims and conquer territory, you shouldn’t have much trouble.

One thing to keep in mind is that it’s okay to go into the negatives with prestige. If you need to call in allies or declare wars and you don’t have the prestige. Who cares? Not only do you get huge prestige boosts from forming Duchys and the Kingdom, but prestige gets reset when you take control of an heir. Plus, it’s better to save your gold for making titles than it is to use it to hire mercenaries.

Also, keep in mind the need to consolidate your claims by gaining Control over your conquered territories and swaying those whose territory you conquered to have a better opinion of you. The number one thing to kill this playthrough is a faction forming against you. Early on, when you don’t have much territory, one or two Earldoms rebelling can be catastrophic.

Once you form the Kingdom of Ireland, you’ll likely only control around half the isle. By this point, Ulster has likely formed a Duchy (or at least part of one) in the north, and the Earldom of Dublin is probably quite powerful as well. Now is the time to start slinging some marriages around.

While Ulster is fairly laid back, you’ll probably butt heads with Dublin over Athlone. The Earl of Dublin is almost certainly going to try and create the Duchy of Meath, and you’re in the way. So, you can either leverage the Earl into an alliance through marriage to one of your children, or just stomp him when the time comes. If you take the latter route, it’s not a bad idea to get your Bishop working on a claim for the Earldom of Dublin so you can go ahead and take it for yourself.

The last house standing in the way of uniting Ireland is probably House Ulster. By this point, Murchad has likely passed away, and you’re in control of Brian. This may give you a few interesting options depending on how the cards fell in your playthrough.

Ideally, you can just marry your heir to the Duke of Ulster’s heir, and when Brian dies, you should have a legitimate Du Jure claim for the Duchy. Alternatively, you can use your Bishop to plug away at claims for Ireland’s remaining counties outside your control.

Given time, Ulster can become fairly powerful. This is especially true if you didn’t take care of Dublin earlier. You’ll likely need to marry some kids off and form alliances to join you in your fight if you decide to take Ulster head-on.

Once you’ve gained control of all of Ireland, spend some time consolidating your possessions and allowing your levies to return to full strength. As long as you keep an eye on things, no one issue should be enough to do you in.

What to do after conquering Ireland? 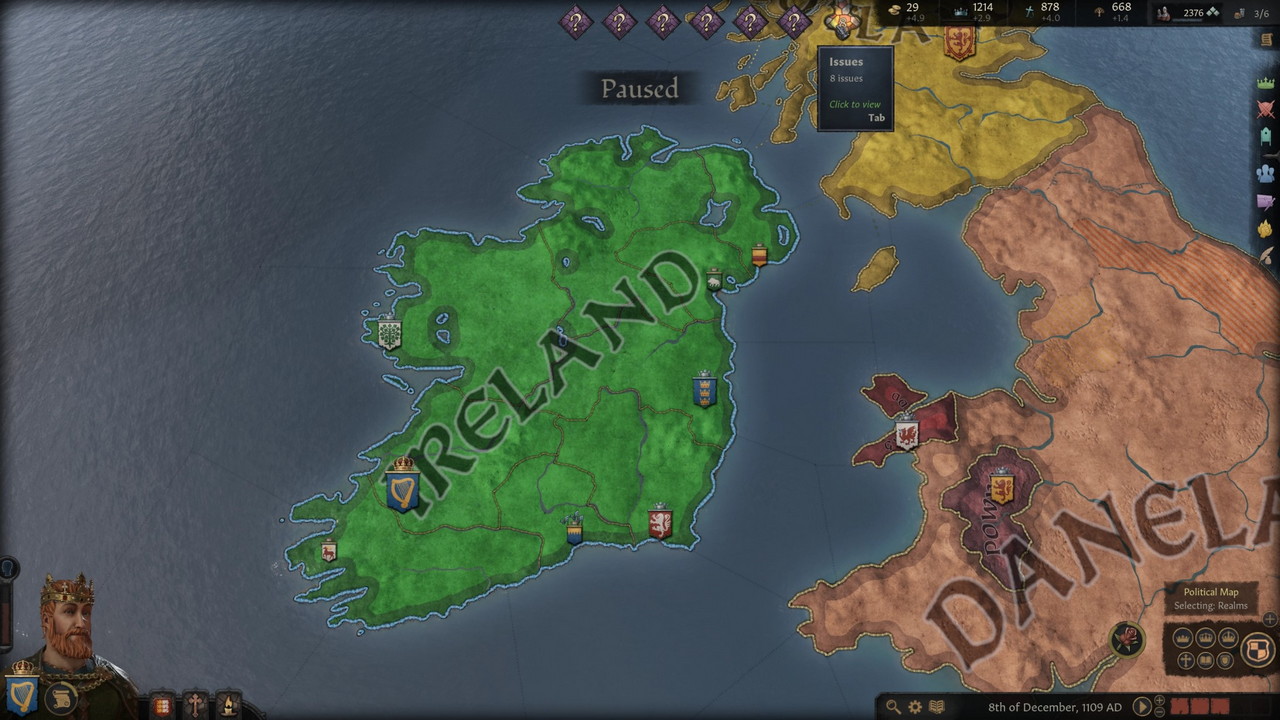 Consolidating Ireland under your crown is a great achievement, but there’s plenty of land in Crusader Kings 3 to conquer. Whether by sword or subterfuge, you’ll likely want to expand your influence.

By the time King Brian passes away, your player character will likely have some interesting claims to pursue. I lucked out and got a claim on all of Alba (Scotland historically) and formed the Kingdom of Ireland and Alba.

It’s up to you to find your next goal, but you’ll likely find yourself setting your sights on Scotland and England due to their proximity. Just be careful. Crusader Kings 3 is somewhat bad at giving you a realistic measure of your changes against an opponent. Remember, the English armies are larger than you may think at first glance.

Crusader Kings 3 End Year | What date is the game over?

Crusader Kings 3 does have an end year, at which point the game will be over, regardless of your current…
Games 2 years ago

Crusader Kings 3 is more friendly to newcomers than its predecessor. However, it’s still not a game that’s easy to…
Games 2 years ago

Crusader Kings 3 Tribal to Feudal | How to Adopt Feudal Ways

During the early game of Crusader Kings 3, especially if you start at 867, having a Tribal government can be…
Games 2 years ago

You won't need much free space.
Games 2 years ago