Microsoft Solitaire's roots date back to 1990 when Windows 3.0 was released. Originally intended to be a free and accessible game that introduces users to how to use the at-the-time revolutionary PC mouse, it was a cultural phenomenon. In 2015, even the most PC-inept are familiar with its addictive mechanics, and estimates state that it has cost America millions of hours of labor during the past two decades.

Unfortunately, the world we live in now is not the one we lived in during the 90's. This is a world dominated by microtransactions and DLC, one that not even the good will of Solitaire can survive in.

Many users who have installed Windows 10 today have been flabbergasted by the fact that Solitaire isn't 100% free to play, and neither is Minesweeper or any of the other games offered by the Microsoft Solitaire Collection. While the games can be played at no cost, ads and popups plague the experience. That is, unless users cough up $1.49/month.

That's right, Solitaire now has a monthly subscription fee not too dissimilar to World of Warcraft. 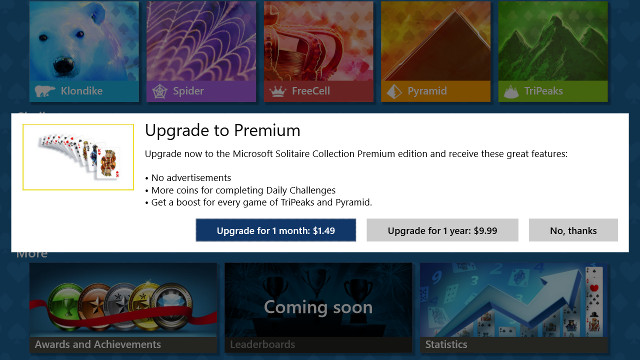 If you've used the infamously bad Windows 8 like I did, you might not be surprised by this turn of events because, well, Solitaire had a similar structure on that OS, too. However, at the time many blamed the ridiculousness on Windows 8 seemingly trying to be as awful as it could be. It succeeded with flying colors.

Now to explain to my Dad why Solitaire has a bunch of Taco Bell ads.

Great additions are coming along with a cool Windows feature.
News 4 years ago

Come and get your framerates.
News 4 years ago

Incompatibility: A List of Games That Are Reportedly Not Working On Windows 10

Not every game survived the transition.
Originals 8 years ago