Fallout 4 Has More Dialog Than Skyrim and Fallout 3 Combined

The voice work on Fallout 4 has officially wrapped, and it looks like it was quite an endeavor for the folks at Bethesda, as the studio has confirmed that its upcoming open-world RPG boasts over 111,000 lines of dialog. 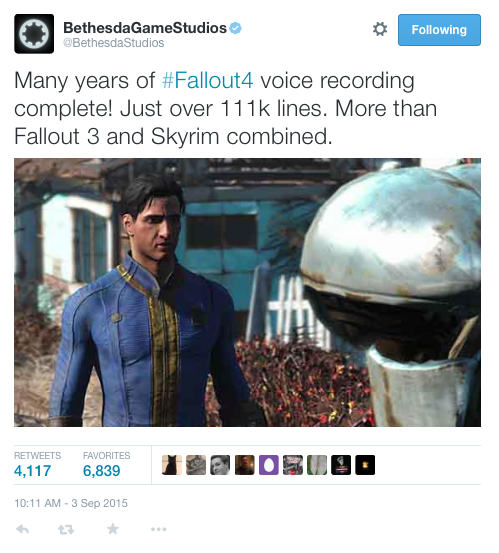 Unlike Fallout 3, the fourth proper entry in Bethesda's post-apocalyptic franchise will feature a fully-voiced protagonist. Do you think this was the right move, or do you prefer a silent protagonist in your role-playing games? There's certainly a case to be made on either side of the fence.

I guess we'll just have to wait until it's out on store shelves this November before we can say for sure whether or not Fallout 4's dialog-heavy campaign delivers. In the meantime, get back to playing Fallout Shelter and use these 10 advanced tips.

Starfield will have four main cities and New Atlantis is the biggest Bethesda has ever created.
News 8 months ago

Starfield was finally unveiled at the Xbox/Bethesda Showcase at E3 2021. We also got a release date alongside the trailer…
News 2 years ago

After a lackluster few years, our Xbox E3 2021 predictions are optimistic. Microsoft has been buying up game studios left…
Originals 2 years ago

Bethesda’s E3 2021 reveals are hard to predict since its showcase is now part of the larger Xbox E3 conference,…
Originals 2 years ago