Bethesda has congratulated Nintendo on the launch of the SNES Classic the only way it knows how: by forcing Skyrim onto yet another console.

However, this time Skyrim has only been introduced to another platform via concept art, with Bethesda knocking up an image of The Elder Scrolls V: Skyrim box art if it appeared on the old Super Nintendo. The artwork looks suitably retro, complete with the Nintendo Seal of Quality in the bottom-left corner and an old-school Bethesda Softworks logo.

Take a look at the image below: 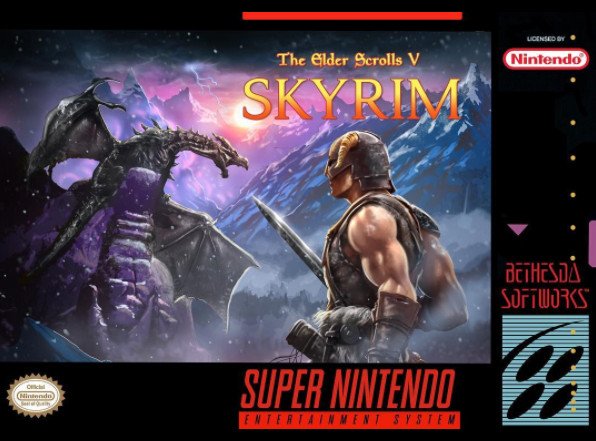 Bethesda posted the image to Instagram alongside the following caption: “Congrats to Nintendo on the launch of the SNES Classic. The Elder Scrolls finally comes to a Nintendo console on Nov. 17th!”

Bethesda has been a major third-party supporter of the Nintendo Switch, with the company recently having revealed that they will be bringing both 2016’s DOOM and the upcoming Wolfenstein II: The New Colossus to the platform. With Skyrim also set to make its way to the Switch in November, Bethesda fans have plenty of reason to pick up the new Nintendo console, even if the Skyrim SNES reimagining will remain little more than a fun social media post. However, if you want more of an idea of how a SNES version of Skyrim could work, then you can also listen to the chiptune rendition of its main theme below:

Skyrim Reborn Together is released for PC on Friday, but it won't be coming to Xbox or PS5.
News 7 months ago

Bethesda adds a trio of free games to Steam as the Bethesda.net launcher migration begins.
News 9 months ago