We’re sure many people are regretting not purchasing stock in Nintendo within the last year, as stock from the major video game manufacturer and publisher is on a steady climb upwards. In fact, Nintendo stock is the highest right now that it’s ever been since the year 2008. This is all because of the Switch’s ever-growing success this year.

In a quick glance at Nintendo’s stock value, we can see that as of right now it is currently sitting at 42,310 yen, which is around $373 here. This is a historic high for Nintendo, considering that it has been on a pretty steady decline (except some notable exceptions we’ll get to in a minute) since the Wii era.

The Business Globalist has released a nifty chart that captures the history of Nintendo stock in the last 15 years. In 2008, Nintendo’s stock was actually in the middle of declining due to the success and fame of the Wii normalizing. As you can see, it would continue a steady decline until becoming roughly stagnant until last year. 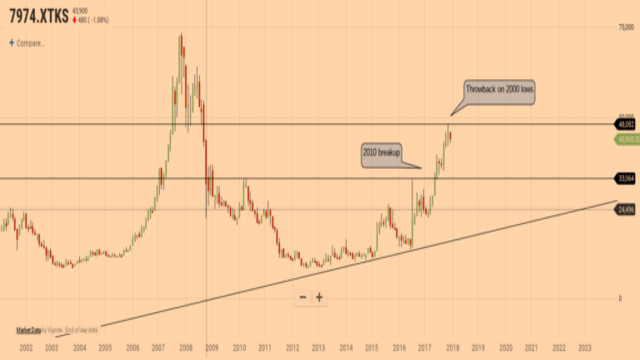 The sudden increase of Nintendo stock in the middle of last year can be attributed to the launch of Pokemon Go and the insane popularity that it saw across the entire globe. This began an increase that grew exponentially in the months since the Switch’s launch in March. Nintendo started out the year at just over 24,000 yen, nearly doubling that number in the time since.

That is impressive alone considering that stock dropped very low into the 8,000’s range during the Wii U era. With the steady incline that the stock is on right now, only time will tell how high it will go. It still has a ways to go in beating Nintendo’s all-time high of 70,500 yen (around $622) that occurred on November 2nd, 2007 during the height of the Wii’s success.

No one can hear you scream.
Games 10 hours ago
9