Fans of the franchise might remember The Last of Us music composer Gustavo Santaolalla performing a brilliant rendition of The Last of Us 2‘s theme song at E3 2018 in June 2018. As revealed via the PlayStation Blog, the official studio version of the song, titled “The Last of Us (Cycles),” has now been released to the public.

Besides that, the developer has collaborated with Mondo to release a unique The Last of Us Outbreak Day poster designed by Sam Wolfe Connelly. It will only be available until 9 a.m. PT on September 29, 2018. The collaboration also means that players can look forward to the re-release of the original The Last of Us soundtrack on vinyl in two volumes.

Additionally, fans should be excited to learn that the developer has released a new The Last of Us 2 dynamic theme, as well as a collection of PS4 avatars which are available for free from now until 9 a.m. PT on September 27, 2018. For those who haven’t experienced the tale of Joel and Ellie, there are currently discounts for The Last of Us Remastered and other The Last of Us DLC until October 2, 2018.

Last but not least, a new set of The Last of Us wallpapers and stickers are now available for Apple devices, which can be downloaded from the App Store. Fans can also purchase a shirt featuring Ellie’s tattoo from The Last of Us 2 from Insert Coin Clothing. As of now, no release date has been announced for The Last of Us 2. 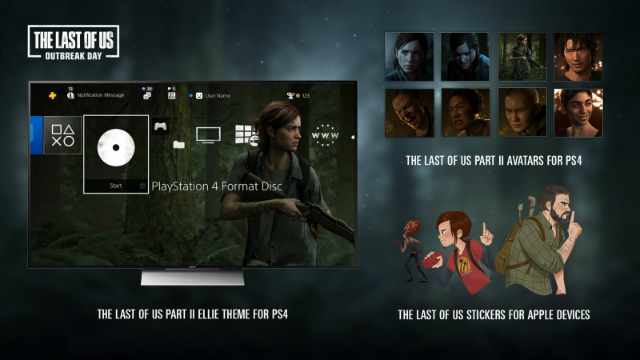 Born in Amsterdam, raised in Malaysia. Comics are my passion. A gamer and science fiction enthusiast. PSN: AlleefAshaari

The Last of Us Part 1 Review: ‘Stuck Somewhere Between Remaster and Remake’

The Last of Us Part I Firefly Edition Restock Arriving Soon