I’ve always been fond of tactical shooters, so this E3 was a particularly memorable one for me. Ubisoft alone had three of these games on the show floor, all with Tom Clancy in their name, and the potential to be great games. One of them I played was Tom Clancy’s The Division, a title that was just as unique as I expected it to be, but not quite as polished this far into development as I hoped.

I was placed on a team of three alongside GameRevolution’s Nick Tan. The single map we played on was snow-ridden and dense with cover opportunity in the way of fences and vehicles. At first, we were tasked with taking out competent enemy A.I., but soon we found ourselves in a Dark Zone, the PvP areas of Tom Clancy’s The Division (other areas are single-player or co-operative only) populated with both A.I. and players.

We quickly learned that players are given freedom as to how they interact with others. By default they aren’t considered hostile, but both parties are allowed to open fire if they desire. I was reminded of Day-Z and other post-apocalyptic online games where players aren’t necessarily encouraged to kill one another, but the innate desire to kill and loot leads to docile exchanges being extremely uncommon. In other words, we soon found ourselves battling not one but two groups of players at E3 in addition to the A.I. 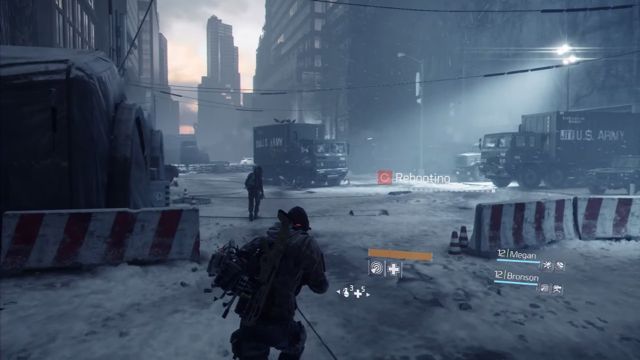 All three player groups present in the Dark Zone fought to acquire loot and kill one another. While the gear that players walked into the area with wasn’t up for grabs, anything obtained during the Dark Zone session was. This loot was particularly valuable, ranging from potent weapons to crafting materials. It goes without saying that everyone was attracted by the thought of destroying others for potential upgrades. It’s worth noting that this loot can’t be used until it is extracted from the Dark Zone.

Gameplay consists of third-person shooter combat with a heavy dose of cover. Most combat takes place with both parties behind objects, so deliberate ability and grenade usage is critical to making progress. I played with a load-out that allowed me to fire an explosive charge which could then be detonated, as well as a land mine that could be thrown from a moderate distance. I would use these two abilities frequently to break foes from their cover. Those who chose to ignore my aggression would be punished accordingly.

The shooting mechanics worked relatively well, but persistent input lag made aim more difficult than I’m used to. What appeared to be a 30 frames per second cap didn’t help. Speaking of the presentation, the game looked downgraded from what I remember seeing last year, but still had a good presence nonetheless. I did keep in mind that this is a game with more than six months of development left, so it still has plenty of time to receive visual polish. 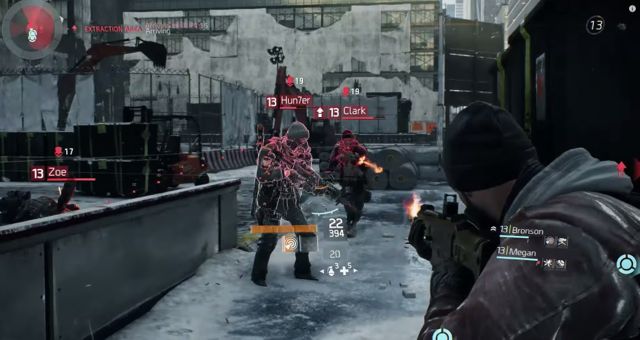 Out of all the gameplay what concerned me the most is how death is handled. Upon losing a full bar of health, players fall to their knees and crawl around on the ground. During this time they are unable to do anything but move around at a slow pace while waiting for a teammate to come revive them. It feels awkward, and led to some awfully bizarre moments where downed players of both teams would stare at one another while crawling around. This would become a common nuisance the longer we played, as all three player groups converged in the middle of the Dark Zone where an extraction point awaited. While each group wanted to carry their contaminated loot onto the helicopter, it seemed virtually impossible to overcome the high health and relatively fast respawn time of other players. It was a bit of a mess, actually.

With all that said, I admire what Ubisoft is going for with Tom Clancy’s The Division. Its gameplay is based around familiar third-person shooter mechanics, with skills that provide opportunity for tactics in Rainbow Six fashion, and some RPG elements that could make it addictive. The unpredictable encounters between groups of players particularly make the game interesting. Killing another group does reward you with gear, but dying is a great risk. You’ll want to become affiliated with players who you can rely on if you want to experience success on a consistent basis.

In its current state Tom Clancy’s The Division isn’t a game I’m sold on, but with some polish it could become a much more compelling model of what games like Day-Z aim for. Arriving on March 8th, 2016 for Xbox One, PS4, and PC, I look forward to seeing what it becomes.

Thank you!
Originals 2 months ago
9

Things that go "baaaah" in the night.
Games 6 months ago
9

If there’s one game Shadow Warrior 3 desperately wants to be, it’s Doom Eternal. Yes, there are death traps, some…
Games 11 months ago