Journey, the 2012 indie hit from developer thatgamecompany, heads to PlayStation 4 today. For many it will be their first experience with the game, but I played through it multiple times back on the PlayStation 3. It's the kind of game meant to be played in a single sitting, and it only takes two or three hours to complete. Nevertheless, I wanted to jump back into the vast desert world numerous times with new partners. Somehow, each Journey playthrough manages to feel like its own distinct experience. It's like playing the game for the first time all over again, and there's a certain magic to its replayability.

I “beat” Journey three times, and each time felt different. When I loaded up the game the day it came out, I was awestruck by its beauty. The endless sea of sand makes an unforgettable first impression, but even more memorable is the first encounter with another player. The only form of communication is a series of small echoes with the press of a single button, so naturally I spam it the first time I encounter someone. They do the same thing right back at me, and a strange connection is formed. I have no idea who this person is, and yet we feel the need to stick together. That is until they disappear about halfway through the game, never to be seen again. I had to finish the rest of the journey by myself, and a sadness fell over me.

It was a bittersweet experience, and yet I felt the need to spend even more time with Journey. The next day I played it again, and that's when I found an inseparable partner. Once again I formed my own echo language with my desert companion, but there was no sudden departure in the middle of the game. We climbed the steep mountain in the latter half of the journey and dropped to our knees in the snow together. Again, I have no idea who this person is, but I find solace and comfort with someone next to me. Somehow Journey forges an unspoken bond between players who know nothing about each other. It's hard to describe, but it's there. 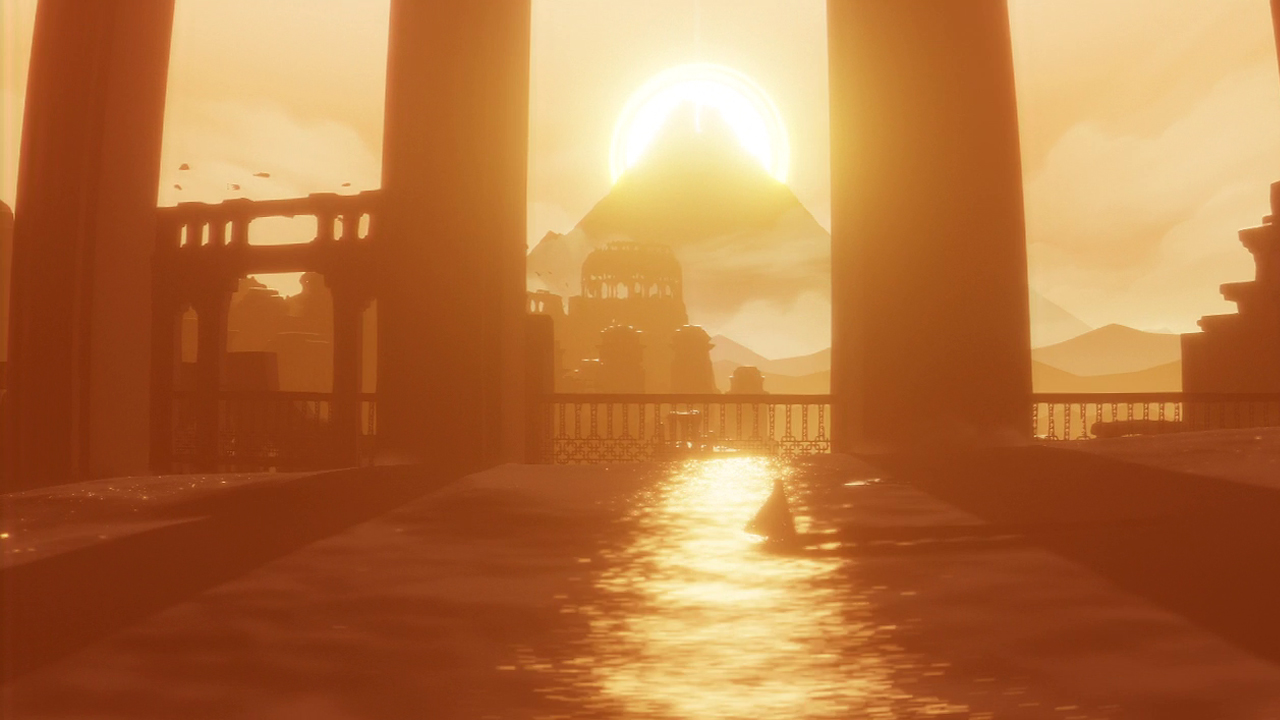 In that second playthrough, I underwent a transformation. Along the way players can pick up pieces of cloth to extend his/her scar, some of which are well hidden. I found all of them with my new partner, which then changed the look of my character. Now when I load up Journey on PS3, my character wears a beautiful white and gold tunic and scarf. It makes for a spectacular visual, and it also signifies a certain knowledge in both myself and the character I control. When someone joins me in the game, they know I've played Journey and know it well. Thus, it becomes my job to impart that wisdom on others.

In my third and final playthrough, which took place a few months after the initial release, I decided to help someone else. I sported the white tunic/scarf combination, whereas my partner wore the typical red robes. I knew where every piece of cloth was located, so I directed them to the hidden crevices and caves with my echo language. They seemed hesitant at first, but eventually they understood my form of communication. After they picked up every piece of cloth, they would hit the echo ping button twice as a form of gratitude. I couldn't help but smile each time, and it felt like an entirely different experience from those first playthroughs. I wasn't venturing into the unknown – this time I was a leader.

I hope other first-time players appreciate the versatility of Journey now that it's available for PS4. I'm sure many PS3 owners played it once, loved it, and then moved on with their lives. That's a perfectly acceptable way to experience the game, but I also appreciate the unexpected depth and complexity behind Journey. The fact that I could play the game three separate times and come away with three separate stories speaks to thatgamecompany's ability to craft unique player experiences. Who knows, maybe I'll have an entirely new story to tell when I play it again on PS4 this week.

Snug as a bug.
Originals 2 months ago
8