I was anxious to get my scare on as I stepped into a cramped darkened booth on the PAX East floor. The tiny bit of space was pitch-black and quiet, somehow muffling out the loud booms from the show. Going behind a black curtain was not unlike entering a confessional. With the headphones on, and the volume maxed out, I was ready to lay witness to many sins. Fifteen minutes later I was rattled, intrigued, and I wanted more.

That church-like feeling is no accident. The opening cutscene is a flaming cross that, as a camera rotates, is revealed to be upside-down. The story takes place in a remote part of the Arizona desert. Like the first game, the main character is a journalist, but this time there are two: camera operator Blake, and his reporter wife, Lynn. Both are out to uncover the truth behind a “seemingly impossible” murder of a pregnant woman known only as Jane Doe.

The first Outlast was set at a mental institution, whereas this one seems to be set on a religious compound. A really cult-y one. The notion of rituals and cleansings fits well in the Outlast universe. Whether they like it or not, Blake and Lynn have entered a dangerous place, and neither is a kick-butt soldier or even a priest.

I assume that the bulk of the game will entail investigating and hiding since that was the primary focus of the original. If you see a man with a machete with a crazed look in his eyes, it’s time to run and hide. As Blake, you are only armed with a video camera. Most of the PoV will be from that camera with night-vision turned on. You can turn off that feature or not even look through the camera by hitting the right button, but usually, the areas like a cornfield, a school, and a farm are way too dark to see without it.

At the start Blake and Lynn are separated so he's off to search for her. (We never see Lynn.) Calling out her name in a panic is understandable, but with each cry out I cringed since that gives away his position. Another thing to worry about is your supply of backup AA batteries for the camera. Each one only lasts a few minutes, and while this is clearly a manufactured element, I didn’t mind it since most of these cult members leave an ample supply of extra batteries around to be picked up. A blessing, for sure. 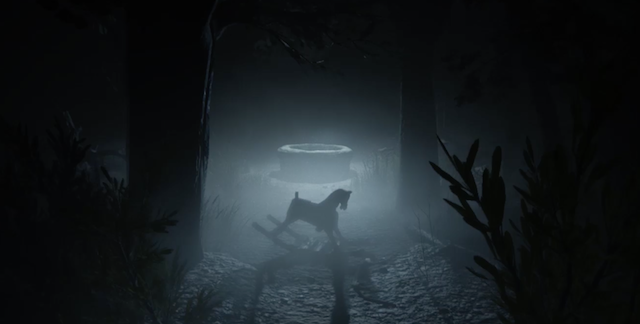 About midway through, you arrive at the aforementioned school. I turned off the camera since there was some light. (Although not for long.) This section, with only the occasional outside noises, and various Catholic textbooks and flyers was where I got that “this is wrong, so wrong” feeling in my gut just like I did in the never-ending hallway of the terrifying P.T. demo on PS4. Part of it is the visual clarity. Everything feels so real in crisp 1080p, even if the occasional panning from right to left can be too videogame-y. Traversing a long hallway, passing by restrooms and classrooms, kept me on edge. It’s like being in someone’s memory or, yes, someone’s video. That feeling of unease rarely lets up.

The trickiest part of these kinds of experience, however, is when and how often to let the crazies out. Too much, and Outlast II becomes less about terror and more just about running away. In the 15 minutes I spent alone in the dark with the demo, I only felt a tad over-stimulated by being chased in the last few minutes.

Throughout are some nice nods to classic horror films: a well that you probably shouldn’t look into à la The Ring and a cornfield that is too quiet like in Children of the Corn. To the credit of the developers at Red Barrels these touches never feel out of place. I just hope the full game doesn’t get canceled like Silent Hills.

The God-fearing man is wary of straying from the path of righteousness onto that of eternal damnation, but make no…
Games 6 years ago

Listen at your own risk.
Originals 6 years ago