The review embargo for the upcoming Nvidia GeForce GTX 1080 has lifted, resulting in an avalanche of information regarding this year's most prominent graphics card launch. You have just over a week to decide if you want to put down a few hundred dollars on this card to obtain one at launch. To help you decide what to do, we're going to briefly go over all the most important factors regarding the GTX 1080 and why or why not you should buy one.

It's around 32% faster than the GTX 980Ti. Being priced comparably to last generation's most popular high-end card, the GTX 1080 is an attractive option for PC enthusiasts and gamers who may have skipped Maxwell, or are looking to have the best performance possible. It's certainly a nice step up from the last generation, allowing all gamers to push their game settings to higher settings no matter the resolution.

The first 4K capable card. Before the 1080, virtually every graphics card has struggled to run high graphic fidelity video games at 4K resolution, even the famous GTX 980Ti. The GTX 1080 has been purpose-built to conquer higher resolutions, allowing it to deliver high framerates in 4K and 1440p environments. Anandtech's benchmarks show the card running Battlefield 4 at Ultra 4K with 75 FPS, something that was simply impossible before now. That said, it still struggles to maintain 60 FPS in many AAA games, so you should expect to have to tone down settings to around Medium in less-optimized AAA games if you plan to play at 4K.

Room for overclocking. Benchmarks show the GTX 1080 performing with relatively low temperatures even at full load thanks to its highly efficient TSMC 16nm process This means that PC enthusiasts will have plenty of headroom to overclock the card, further improving its performance in the long run.

Ansel is a selling point. This software will allow Nvidia 10-series cards to utilize free-roaming camera to take a variety of remarkable screenshots. There are a ton of options ranging from super high resolutions, to 3D screenshot capturing, and post-processing effects. For fans of screenshots, this is a reason alone to consider investing in the new line of cards, including the GTX 1080.

It will be an attractive option for VR gamers in a few months. As noted by RoadToVR's review, the performance gains of the GTX 1080 along with its VR-friendly features make it by far and away the best card on the market for VR. That said, it also stated that it is a bit overkill for most games, so consumers with a GTX 980Ti may want to think twice before investing. It will take a little while for game creators to optimize their experiences around the new features of the GTX 10-series, meaning that an immediate purchase isn't necessary.​ 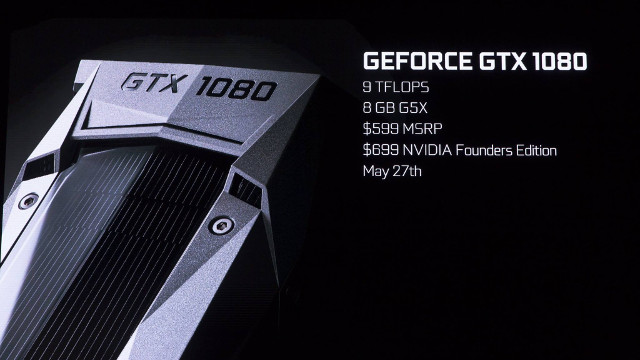 It's not as awe-inspiring as many anticipated. Nvidia's carefully composed graphs that it showed during its GTX 1080 reveal earlier in the month made it seem like it would blow everything else on the market out of the water. While it's a very capable and technically proficient card, it doesn't render the Maxwell line obsolete. If you're trying to save money and have a 7-series or Maxwell card, you can get away with waiting another year or two for the next generation.

The GTX 1070 may be the real winner. As impressive as the GTX 1080 is, all pre-release information for the GTX 1070 points toward it being by far the better price-to-performance card. At $380, and capable of nearly 7 teraflops of floating point processing, it may end up being the better choice for consumers without a large amount of disposable income.

You won't be able to get the GTX 1080 for $599 on May 26th. It turns out that Nvidia is going for a multi-tier approach, where non-Nvidia manufacturers will be able to sell their variety of reference and non-reference models for the $599+ that was originally advertised, but not until June. Meanwhile, Nvidia's "Founder's Edition" version is simply a single fan reference model that will be sold early to capitalize on demand, priced at $699. The only reason you should be biting on this option is if you simply can't wait any longer, because today's benchmarks have shown that there is room for improvement on cooling and airflow design.

Comes with DLSS 3.0 support too.
News 4 months ago

Nvidia announced that the RTX 4090 will be up to four times faster than its predecessor, the RTX 3090 Ti.…
News 4 months ago

Even more power!
News 1 year ago

Get the competitive edge.
News 2 years ago