During the past few weeks, online vendor sites such as Newegg and Amazon have seen a massive upsurge in GPU sales and most people cannot determine the cause behind such an occurrence. Video cards such as the GTX 1060 and 1070 are being sold left and right, yet no one is really buying the GTX 1080 Ti which launched earlier this year. As a matter of fact, upon checking online auction site eBay for new listings on the GTX 1070 Founder’s Edition card, you will notice various auctions with a price of $550 or higher. This is more than a 25% increase from the base price of $300 as listed on the official GeForce store, which is also currently out of stock.

As for the cause behind this bizarre sales spike, it is the result of cryptocurrency miners looking to purchase various computer parts in order to build the best mining rig they possibly can. If you’re not familiar with cryptocurrency mining, it is the process of generating digital currency by mining through a chain of blocks and validating transactions. No, we’re not talking about anything remotely close to Minecraft despite the similar dialect used to describe an action. If you have a powerful mining rig and some persistence, you can potentially make thousands of dollars over the course of the year.

Some of the most well-established cryptocurrencies currently on the rise include Bitcoin, Ethereum and Litecoin. Each cryptocurrency has a hashrate which increases over time and makes mining more difficult. Back in early 2012, you could comfortably mine several Litecoins within a day using a single graphics card. The value of Litecoin has increased by more than 20000% since then and mining it would require a powerful rig that can leave a big hole in your pocket upon purchasing the necessary parts.

When it comes to building a mining rig, there are several guides published throughout the internet which provide a step by step process on selecting the best parts to purchase. If you’re looking to build a rig in order to make a quick buck then you should think twice, as the cost versus return value can be a huge turn-off for those who lack patience. In this example, the guide tells us to purchase six GTX 1070 video cards, which would equal to about $3,300 or more. Simultaneously running all six GPU’s at 99% usage will probably affect your electric bill in a rather negative way. 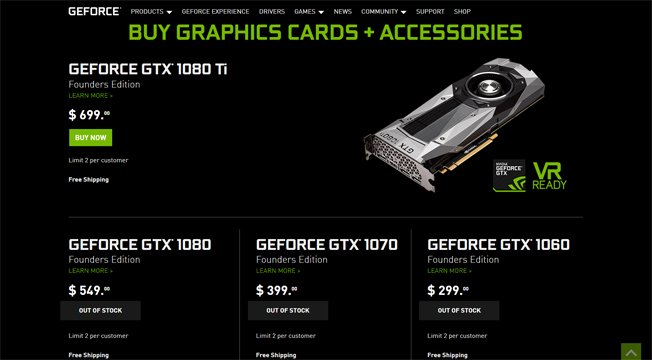 Due to the recent GPU stock shortage, numerous PC gamers have decided to take action by emailing NVIDIA and AMD with a handful of complaints. The good news is that NVIDIA seems to be working with Asus in order to publish a new line of video cards (NVIDIA P106-100) based off the Pascal GPU architecture and built solely for cryptocurrency mining. The specifications for one of the GPU’s include a boost clock of 1708 MHz, 6 GB video memory and 1280 CUDA cores—along with a promise of maximum hashrate performance. While we don’t know the exact release date for these cards as NVIDIA hasn’t made an official announcement, they are likely to come out before the end of this year.

Potential AMD customers are facing similar issues, as the RX 470 to 570 line is also sold out across the globe. Thanks to a recent listing on the Overclockers UK website, we have information that suggests Sapphire is launching its own brand of mining cards based off the RX 470 series. In order to reduce the cost of production, the RX 470 Mining Edition will not come with a display output. Additionally, it seems like the standard 3-year warranty will not apply here as Sapphire is limiting these cards to a maximum of 1 year before returns are void.

As someone who has avoided building a mining rig in the past due to the steep costs, I’m eager to test out a few of these upcoming mining cards. In the meantime, hopefully both NVIDIA and AMD can hastily work to ease pressure off the PC market and allow gamers to continue to purchase affordable graphics hardware.

Time is a flat circle.
Tech 4 months ago

Get the competitive edge.
News 2 years ago

NVIDIA May Be Working on New Graphics Card Series