It’s the summer of 3DS titles, and Hey! Pikmin is releasing at the end of the month alongside Miitopia and the svelte Nintendo 2DS XL. The first new Pikmin game we’ve seen in quite some time, it’s available now via the Nintendo 3DS eShop as a free demo. It’s not quite Pikmin 4 if that’s what you were hoping to find, but instead it’s a streamlined, simplified experience that relies heavily on the touch screen. It might be decidedly less complicated than what you might be used to seeing, but so far it feels like another winner for Nintendo’s popular handheld.

Once again you’ll take up the mantle of familiar character Captain Oliver as he makes his way through a world rife with Pikmin. Instead of managing your Pikmin in a strategy setting, however, you’ll be throwing them where you need them while you stroll the world as Captain Oliver. The game is set up like a side scroller this time around, which is a vastly different departure from the way previous Pikmin played out, which feels more freeing than ever before.

Near the beginning of each level, you’ll get a few Pikmin that you can utilize for various purposes. Some can be used to attack, and you’ll want to use others to throw them up onto platforms to collect items and move things out of your way for Captain Oliver. You can throw them by tapping, and control Oliver with the D-pad as well as the four face buttons. Pikmin are controlled primarily with the stylus, whether you’re sending them out to move things or shatter items.

The “Hey!” element of the game’s title comes into play because you can whistle for your Pikmin anywhere on your screen, which will find them all running back to you. You can hear a “Hey” voice when you whistle for them to return. When you gather them all together you can send them out to do other jobs for you, but you need to have something in mind for them to do. They can’t just sit around and idle or they’ll just walk back to you.

Each Pikmin have special abilities and traits, like yellow Pikmin carry electricity resistance and blue Pikmin can swim through the water. Red Pikmin have fire resistance as well. You’ve got to figure out the best paths through a level by using the various different Pikmin at different times, and it adds an interesting and mildly challenging trait to a game that was in sore need of some new mechanics. 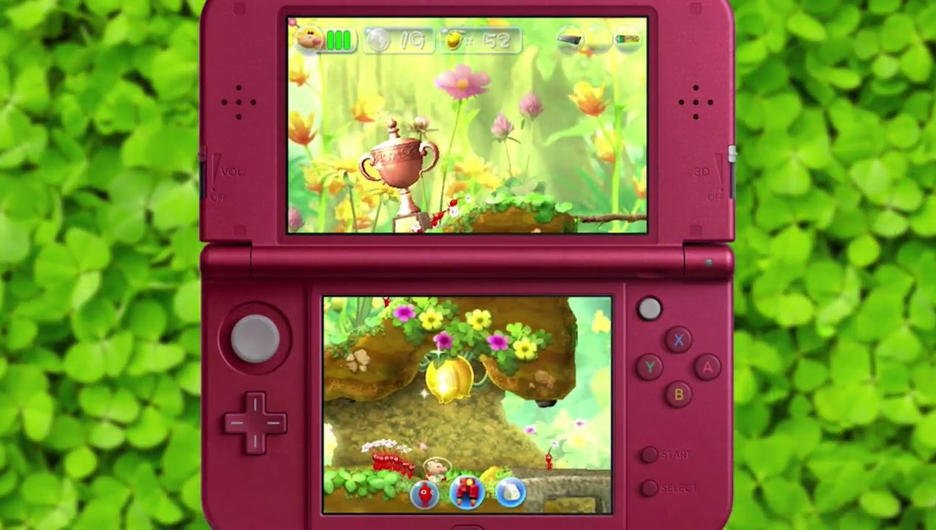 Utilizing different Pikmin to complete differing situations and level paths feels rewarding, and while the free demo on the eShop is unfortunately only 20 to 30 minutes long depending on how well you take to the game, it’s setting the foundation for a Pikmin that’s taking much of what made the series interesting in the first place and working it into something entirely new. It’s a lot more entertaining thus far in my estimation than the previous Pikmin games in several ways, and while I appreciate and enjoy those as well, I can’t wait to see where the full game ends up taking me.

Things that go "baaaah" in the night.
Games 6 months ago

Here’s everything in the Animal Crossing: New Horizons 2.0 update

Time to make some Happy Homes.
News 1 year ago

We finally got Bayonetta 3 news for the first time since it was announced four years ago. Fans feared the…
News 1 year ago

Yes, you can pet the Monsties in Monster Hunter Stories 2

Aww, look at the deadly dragon!
News 2 years ago