Epic Games’ first major release in over a year has finally arrived. Fortnite is a survival co-op game that has been in development for several years, and more recently has seen extensive beta testing.

I’ve started working on my review for Fortnite, jumping in with experience from playing with the development team at E3 and in Beta. Below are my thoughts so far.

Smooth combat is the game’s greatest asset. Most third-person shooters have lousy gameplay, but not this one. The gunplay and movement in Fortnite are tight, another great example of the Unreal Engine. Each of the ranged weapons I’ve used have had great feedback and sound effects. You spend a lot of time controlling your character since this is not a story-oriented game, so this plays a huge part in the game being enjoyable during long play sessions. The only clunkiness I’ve found is when using melee attacks, which are underpowered anyway.

It’s easy to jump in. Within 20 minutes of receiving my copy I had installed the game and set up a character. The game doesn’t waste any time with nonsense at start-up, including a concise tutorial that goes over all the fundamentals.

A good example of procedural generation. The level-based procedural generation employed here is outstanding. While there might not be an open-world to explore, the levels you battle on feel like they were handcrafted despite being randomized. This means you never quite play the same level twice, and that’s a great thing given that you spend a lot of time doing the same thing over and over. 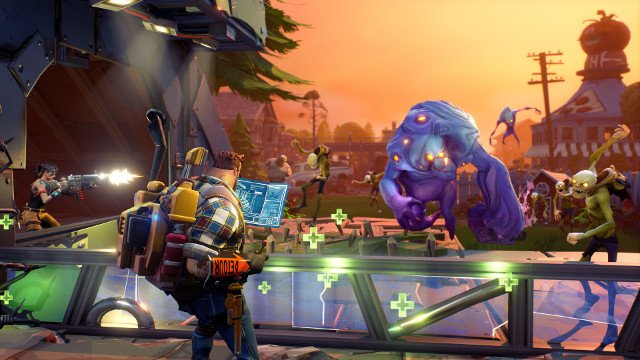 Progression is pay-to-win centric. I’ve played my fair share of pay-to-win games, but this is one of the more abrasive experiences outside of mobile. The loot that you want most is gated behind extremely low RNG. Meanwhile, a poor sense of reward is imposed by meaningful loot not being given out upon mission completion. Players are incentivized early on to spend money on higher tiers of the package (i.e. The $149.99 Limited Edition), or directly invest in microtransactions. This is by far the game’s biggest problem, which is sad given it can be resolved by simply making good loot more readily available.

A fun and colorful atmosphere. While playing Fortnite I get the impression that Epic Games had fun creating the game. It has a positive tonality that resonates through the gameplay and presentation, making it feel like an experience that remembers it’s a video game, rather than trying too hard to be realistic and visually competitive. Characters have great personality, including the several types of enemies that may initially appear to be generic. It’s a nice change of pace from the serious tones of this year’s AAA releases.

Looking good. Fortnite comes across as a well composed product with a high level of detail in its characters and environments. I’ve most been impressed by the cleanliness of the user interface and animations. Neither of these elements are traditionally well executed in survival games, but Epic Games managed to do so without compromise.

Give the voice actors a raise. There’s a healthy amount of text to read, but most dialog is communicated using voice audio. While the story of Fortnite might not take precedence, interactions are enjoyable to witness thanks to great performances by the cast. Their lines are delivered vibrantly and convincingly, substantiating the characters in an organic way. 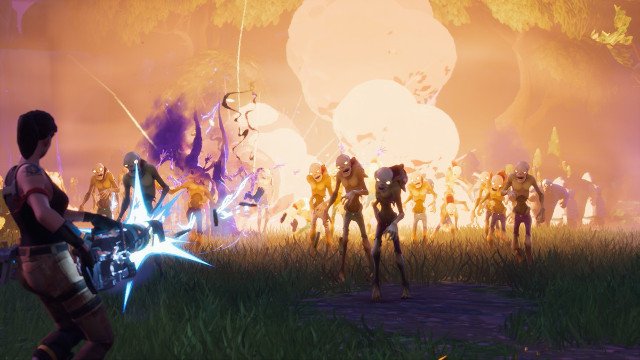 Inventory management is frustrating. At the beginning of your adventure you have very limited space for all the items you carry, and you can’t manage it without being in a mission. This results in some less-than-ideal situations that compromise the fun experience.

A game best enjoyed with friends. Fortnite is clear about its intentions of being, first and foremost, a cooperative game. Up to four players can join a lobby and play together, taking down hordes of enemies using a variety of equipment. You can play alone, but you really don’t want to do that. Using teamwork with friends, and helping one another in a pinch, is when the game comes alive. For social gamers its structure is friendly

The servers are struggling. Apparently Fortnite is a popular game, because the servers have been under serious stress since launch. Disconnects and failure to connect are common at this point. Eventually, it should be resolved, and it bears mentioning that Epic Games has been very good about communication regarding the issue.

Lots of content for $40. At a budget price, and released at the tail-end of Summer when there are few new games to pick-up, Fortnite is a fantastic entertainer. I’ve already gotten a lot out of the game and plan to play at least for the next week. For $40, it’s a good value.

Fortnite released today on PC, PS4, and Xbox One. GameRevolution’s official review will be published within the next week.

No one can hear you scream.
Games 20 hours ago

Do you wanna build a snowman?
News 2 days ago

What can be used for the challenge?
Games 3 days ago

Boost is out, Adventure could be in!
News 4 days ago