(Content warning: As you can probably imagine, the following article contains a selection of offensive insults. We do not condone such behavior and, as outlined in the article, would like to work towards encouraging everyone to be more pleasant while playing video games with one another.)

Last month Overwatch game director and all-around neat guy Jeff Kaplan released a video addressing his game’s community, asking them to “play nice, play fair” in an effort to curb the toxicity that’s reportedly so prevalent among its players. With Overwatch being one of the most popular FPS games around, it’s no wonder that it’s attracted some highly competitive, highly salty players who are all too eager to hurl abuse at one another.

Papa Jeff going out of his way to give the Overwatch community a slap on the wrist must mean that the situation has gotten out of hand, and as is the case for most Overwatch players, I have been in the company of the game’s more “divisive” players many times. However, there’s a difference between a game’s community that houses some toxic players, and one that is apparently infested with so much toxicity that even the creators of the game are afraid of it. Unfortunately, this appears to be the case, with Kaplan opening up in a recent Blizzard forum post and explaining how, while the Overwatch community on the whole is “awesome,” some of its behavior makes it a “scary” and “intimidating” place for Blizzard developers to venture into.

Also: Cuphead is so Difficult It’s Making Me Hate Myself

I love Overwatch, and I think Jeff is a pretty cool guy who gives us free content updates and only asks for us to gamble away our life savings on shitty loot boxes in return, so I decided to make his life a little easier by injecting some positivity into the Overwatch community. While I completely understand that one lone man venturing into Overwatch and saying nice things to people probably isn’t going to have any notable impact on its community, I thought I’d give it my best shot nonetheless, and do my best to encourage everyone to play nice and fair just like Jeff would want. Here are the results of my efforts.

So things didn’t get off to a great start. In my very first game, I decided to rally both my teammates and our opponents, encouraging everyone in the match to “have a really good time playing us some Overwatch.” After all, we should ultimately be having fun, regardless of winning or losing, right? It’s just a video game; a distraction from the terminal mundanity of the human condition.

A guy told me to eat his ass in response. 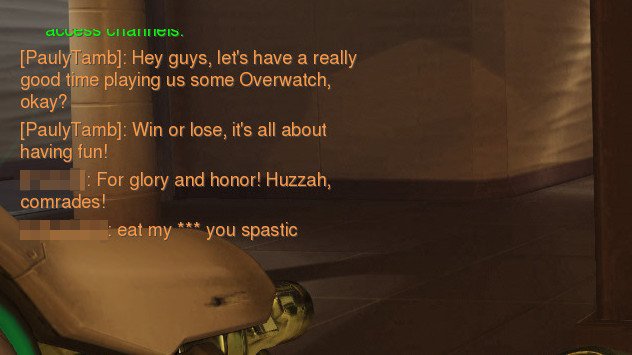 I’m not one to fall at the first hurdle, so while I prematurely buckled myself in for an evening of feeling slightly worse about society, I nonetheless persisted in my pursuit of having a bloody great time of things. In the second game, I once again encouraged everyone to have themselves some fun, at which point another player piped up that fun was indeed to be had — “on the condicion [sic] u lose ^^”. 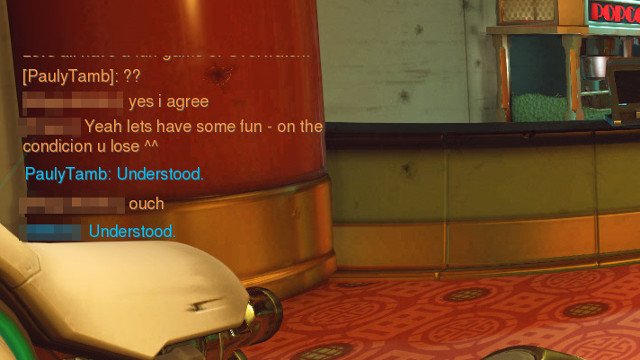 The inclusion of two carets at the end there indicates that this particular player was just yanking my chain, playfully raising their hypothetical eyebrows in acknowledgement of my friendly demeanor, while simultaneously maintaining a competitive edge that, while still somewhat aggressive, was perfectly acceptable considering the circumstances. We were playing an online multiplayer game, after all: though I was looking for unrequited positive energy from the community, I could still accept some classic, competitive banter.

But then this other guy called me “frikin gay.” 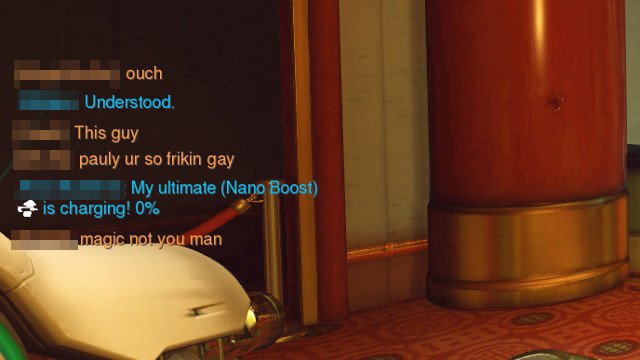 Yeah, so, not the best of starts. At this point I was only two positive comments in, and already one fellow had used “gay” as a pejorative, while another had taken it upon himself to refer to me using an ableist slur while suggesting I dine from his anus.

The Overwatch community wasn’t convincing me that my friendly disposition was having any positive impact upon them, and that I was actually provoking the opposite response. By making a concerted effort to be friendly to these people, they were becoming notably uncomfortable and reacting angrily. Rather than welcoming a friendly face to their game, they were instead made to feel insecure by someone sincerely expressing their enjoyment in playing alongside them. One particular individual seemed outraged by the entire concept of another human enjoying Overwatch in any capacity. 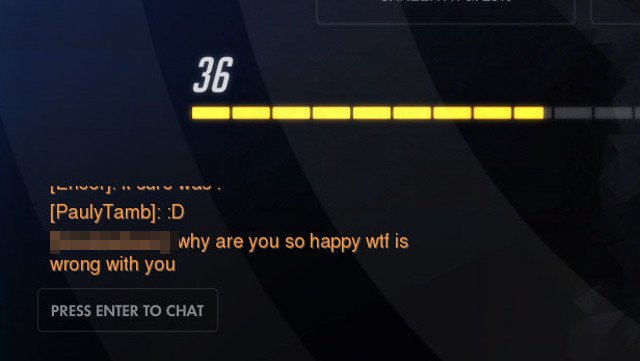 This individual was frankly incapable of comprehending that someone could feel anything but anger and resentment while playing Overwatch. His incredulity continued: “why are you so positive”. He didn’t include a question mark, because he didn’t want to hear the answer. I tried to express the reasoning behind my positivity in the simplest way possible: “Because we all had fun!” He then fired back with some sincerity of his own. 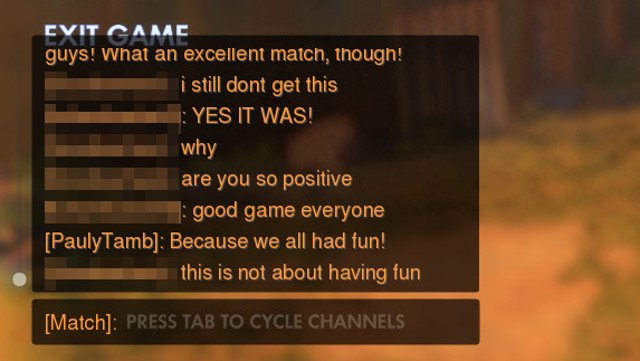 This is not about having fun. Those words, they pierced me like an arrow through the heart. Was this all worth it? Should I even bother continuing to try? In attempting to inject my own slice of positivity into the Overwatch world, I had overlooked the simple fact that maybe some people just don’t play Overwatch to have fun. Maybe winning is all that matters to them, and the players that stand in their way are worthy of their derision of a result. Maybe, in trying to make the Overwatch community a more positive place, I was having the opposite effect: if winning is the most important thing about the game to them, and I was encouraging people to have fun above everything else, then was I making the game less positive?

I felt myself becoming jaded. After another match in which I desperately tried to assert that everyone should enjoy themselves to the best of their abilities, another player on my team replied: “Fuck your fun.” I was losing hope. 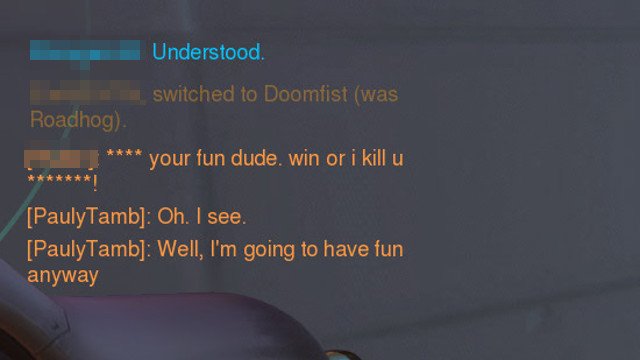 But then, as if sensing my growing disappointment, a new influx of players emerged: happier, friendlier players, who appreciated the positive impact I was trying to have on their day. First there was OffTheHeezay, who pledged his love for me after I described how lucky we were to all play one another after a particularly fun round: 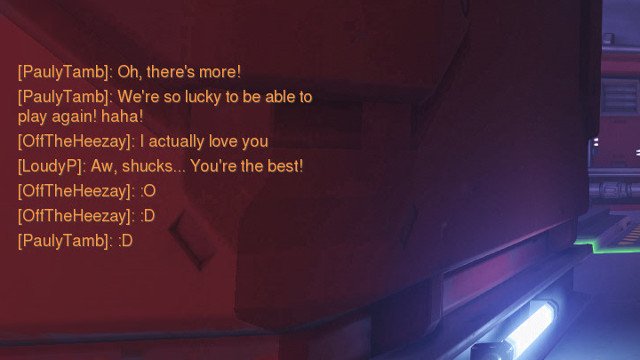 Then there was this group of fun-lovers, who after my initial rallying cry to have a super great time with one another, took it upon themselves to actively congratulate each other on their respective victories regardless of which team they were on: 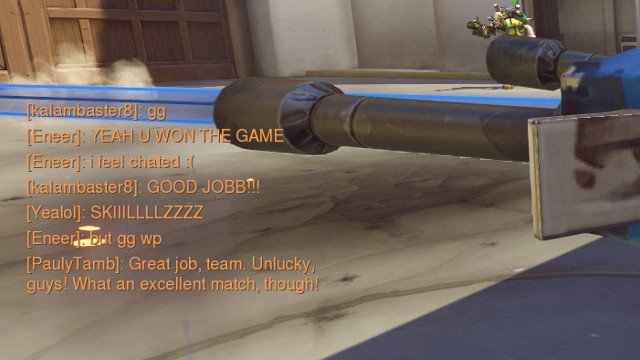 One of my buddies from the previous play session, Eneer was so taken by our conversation that he actively sought me out on the Blizzard app, explaining how my friendliness had encouraged him to “catch” me like a “pokemans.” 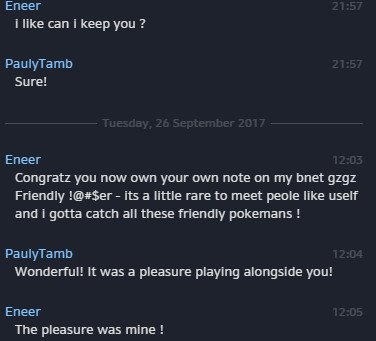 While Eneer was obviously compelled by my pleasantries, he’ll never know what impact he had on my evening: before meeting Eneer and his unabashed enthusiasm for having a good time, the whole point of my experiment — to try to convince myself that the Overwatch community wasn’t filled with toxic players, like a claw machine but with the stuffed toys replaced by complete wankers — seemed doom to fail. No one reciprocated my enthusiasm, a guy instructed me to eat his ass; it was all but over. But then Eneer drifted down into my play session, like an angel of hope but with a keyboard and mouse instead of wings and a harp, and all was right in the world once again.

At this point I was on a roll, but not a roll of capturing objectives; a role of capturing hearts. Not only was the Overwatch community starting to jump on board with my theory that everyone should focus on having a good time more than moving the Payload, but I was also encouraging people to think more positively about the game and its community in general.

One player, DrMunni, initially told me to lower my expectations after I suggested that both my team and our opponents should work together to have the best match possible. He apologized to me, telling me that while my enthusiasm was appreciated, Overwatch players weren’t the nicest of people and therefore I was probably going to be disappointed. I told him that we should both represent “the positive change we want to see,” before he replied: “I like the way you think.” 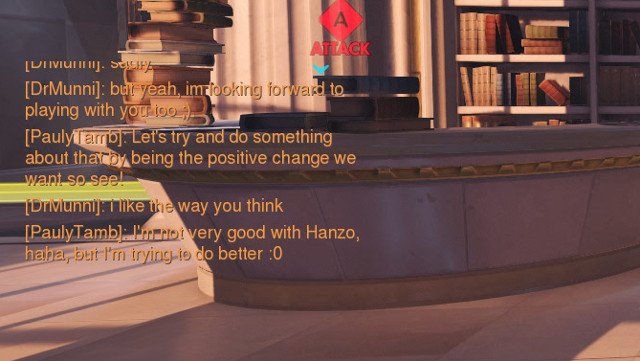 I should stress that this conversation was held during a particularly controversial portion of my experiment, in which I was not only attempting to indulge in pleasantries with the Overwatch community while playing as Hanzo — a hero who I am both unfamiliar with and who everyone hates with a raw, unfettered passion — but while also playing on Competitive. Honestly, I wouldn’t blame these players for being hesitant to respond to me at this point, yet here DrMunni was, agreeing to make our play session a more accepting and enjoyable place.

The next game of Competitive I played was with a teammate who put on his headset specifically to tell me to “shut the fuck up and play the game, you dickhead,” so I thought I’d end my experiment there before the light behind my eyes started to fade once again.

So… is the Overwatch community toxic?

Jeff Kaplan must be be forced to wade through a sewer of filth every time he so much as glances towards Overwatch‘s player reports, and I can only imagine the sheer volume of racial epithets, homophobic slurs and other such behavior that Blizzard must deal with on a daily basis.

However, whereas I’d usually play Overwatch in stoic silence as a result of my preconceptions regarding the game’s community, during my time spent trying to positively engage with them I found myself feeling a little bit better about the game and the people playing it. On the whole, yes, the Overwatch community is probably pretty toxic — but if we all met with this toxicity with a sincere reminder for everyone to enjoy themselves, a simple “good luck, have fun!” or even an adorable emoji of a smiling man wearing a party hat — *<(:) — then maybe together we can make Overwatch a better place.

"It's not just another drug show."
Originals 4 weeks ago
7

A silent winner.
Games 1 month ago