When the Gran Turismo series first debuted, it was untouchable when it came to console-based racing sims. Some games were undoubtedly better looking, and arguably better feeling, but none gave the vehicle variety and ability to customized every setting imaginable like Polyphony’s iconic franchise.

In the last ten years or so though there has been a storm of racing sims, and Gran Turismo has failed to keep up the pace that series like Forza and recent newcomer Project Cars have established. Given that the last GT game came out four years (and a whole console generation) ago, Sony has to have a lot riding on their exclusive racing game. Does Gran Turismo Sport have what it takes to go the extra mile and keep the series relevant? Here’s what I think so far.

I haven’t gotten a chance to spend time with the retail servers yet, and one black mark against the game already is the online-only play. For the last few days, while Sony has been ramping up for launch, no servers have been available.

When the game can’t connect you’re limited to Arcade mode only. Unfortunately, I just caught the tail end of the demo, so I can only really comment on the most superficial aspects of the game. 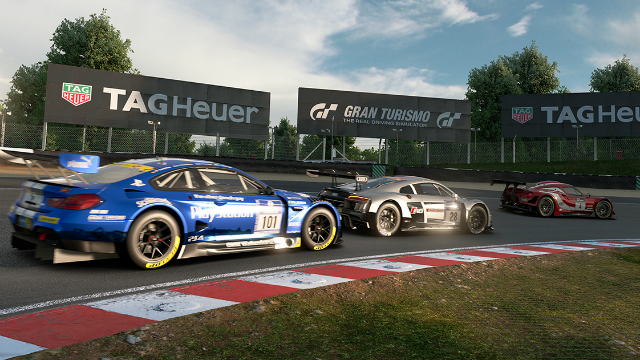 As expected, the cars and environments look lovely. I did get the opportunity to take a 2015 Mitsubishi Lancer EVO Final Edition out for a spin, and it looked beautiful in checkerboard 2K upscaled to 4K. The game also supports HDR, so if you have a TV set that supports that technology, the colors really pop in a way that makes you realize just how much fidelity you miss when playing games in SDR.

The trade-off for the great look in 4K though is a bit of framerate. While I never noticed any abrupt frame drop, it’s not a full 60fps. However, Polyphony has given players a choice with the PS4 Pro that should help most everyone be happy. You can choose between resolution or framerate in the initial game menu. When you go with framerate, the game will be displayed at 1080p, but have a constant 60fps onscreen.

How Does it Stack Against the Competition?

For a comparison with its nearest comparison, I would say that Gran Turismo Sport has better-looking cars and tracks with less pop in and higher-res textures than Forza 7 on the original Xbox One. However, Forza 7 on a high-end PC (and presumably Xbox One X when it comes out) squeaks past GT Sport. That’s pretty great for a sub-$400 console pitted against a $1200+ PC or $500+ console.

One thing it smashes Forza 7 on, at least at this moment, is the rendering of your competitor’s cars. Every racing game worries about making your vehicle always look sharp, but usually, the competition has scaling textures or lower-count models. In Forza 7 there’s an issue with liveries being displayed. None of your opponents ever have them in single-player. Nothing takes me out of a race faster than the sight of my car looking totally sweet and decked out in decals racing alongside a bunch of dull, primary colored AI. GT Sport renders everything just right, and the AI will actually have varied looking cars.

Since I haven’t got a chance to sink time into the full single-player or multiplayer experience I feel like it would be remiss of me to comment on it. My first impression is that the sim options and driving feel very similar to Forza 7. However, there is a new damage system and “safety scoring” model in GT Sport that I want to try out before making any final comment.

I’ll be playing this game as much as possible this week, so stay tuned for our full review coming soon. Check out our impressions piece on GT Sport for more on the game.