The Metal Gear Survive Single-Player Gameplay Trailer Looks Great, but What About the Microtransactions?

We got a look at the Metal Gear Survive single-player and co-op campaign in a trailer released by Konami today. This video is our first good look at how Survive is going to play, and honestly, I’m pretty impressed. It would have been effortless for Konami just to slap the name Metal Gear Survive on some hacked together pile to milk the franchise, but this game actually looks good.

It has the base building I was hoping we’d get with Mother Base in MGSV: The Phantom Pain, an improved weapon system, and the ability to recruit and assign staff. The story is bizarre, but in practice it looks intriguing with an emphasis on survival and resource management. However, from looking at today’s Metal Gear Survive footage, I can also tell it almost certainly has one thing that might ruin the whole package: microtransactions.

Why I Think Metal Gear Survive Will Have Microtransactions

Konami hasn’t commented on the status or extent of microtransactions in Metal Gear Survive, but let’s face it, it’s probably going to have them. Other than the fact that every major AAA title seems to be chomping at the bit to include some kind of premium currency and loot box system into their games, there are some telltale signs that Metal Gear Survive will include microtransactions.

Metal Gear Survive Must Always Be Online to Play

Just a few years ago people were incensed at the prospect of a game having to always be online to play, even in single-player mode. These days though it’s becoming more and more common, and there’s a reason for that. If a game isn’t continually dialing home, then there’s a possibility a player can cheat.

You see it in many games now, especially on smartphones. If your gaming device isn’t connected to the internet, titles that require you to be online just won’t play. That’s because they want to make sure that you’re not modifying files or using exploits to obtain premium currency. Since even the single-player of Metal Gear Survive requires you to be online, and the game isn’t offloading processing to some cloud server, it’s likely a measure to prevent players from giving themselves a ton of premium currency instead of paying cold, hard, cash for it.

There are Timers For Resources 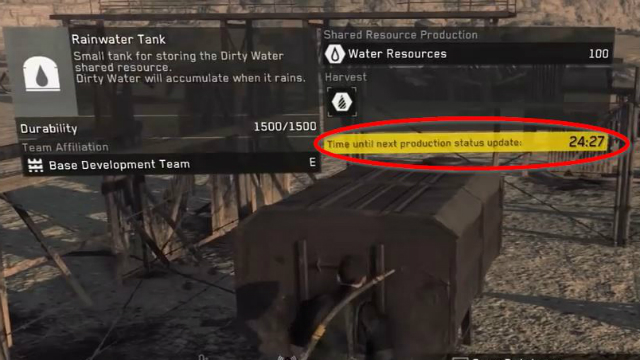 In the Metal Gear Survive single-player commentary trailer we’re introduced to a few of the things you can build within the walls of your base. Some of these objects can produce resources for you, which are on a timer. In particular, we see a Tomato Farm that has at least a 44-minute timer, and a Rainwater Tank that has at least a 24-minute timer.

It looks like resource collection and crafting are going to be a big part of gameplay. Buildings, food, and defenses all cost resources to build, and may include a timer along with the resource investment. Games with microtransactions often depend on creating a wall of timers that cause you to progress through the game very slowly. You’re then forced to either wait to play or pay to reduce or eliminate your current timers.

The Game is a Resource Grind 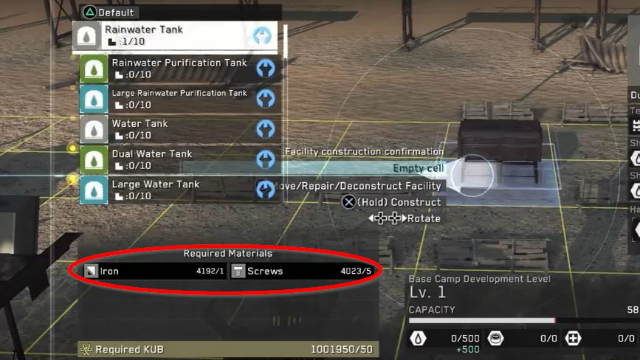 I think the base-building in Metal Gear Survive looks fantastic, but it’s obvious there’s going to be a certain amount of resource grinding if you want to get specific buildings or items for your base. I’m okay with that as long as it’s reasonable, but this is another aspect of free-to-play games that might be rearing its ugly head.

If you’ve played any of those empire-building games, you’ll notice you get a ton of resources right off the bat, then they slow down to a trickle. In a lot of games, you can just start buying the supplies straight at that point so that you can build your next granary or whatever. Some games obfuscate this a little more and just let you skip the timers for collecting resources. Either way, the result is the same. You can either pay up or wait a ridiculous amount of time.

There are Item Rarity (or Quality) Tiers 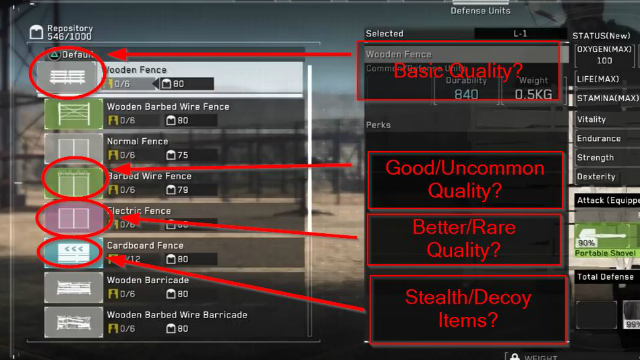 Plenty of games have their items split into different rarities or qualities without causing any issues. It’s been a mechanic in gaming for decades, and by itself, it’s not an indicator that a game will have microtransactions. However, Metal Gear Survive is a resource grind in which a lot of weapons are going to either be manufactured or upgraded by the player.

When you add item rarity tiers to a game that already makes you grind for resources, with at least some of them on timers, then you’ve got a pay-to-win situation on your hands. Since this game features co-op, I’m going to assume that it also has some sort of PvP mode we haven’t seen yet. If PvP is anything like Metal Gear Solid V: The Phantom Pain’s async multiplayer, the pay-to-win issue gets even more complicated.

If there’s async multiplayer, Metal Gear Survive is configured perfectly to implement microtransactions like some $60 console-based version of Clash of Clans. Players will be vying to build the best base, and those who pay will always win out over those who don’t.

How Can Metal Gear Survive Implement Microtransactions to Not Be Terrible?

I hate microtransactions in games. I don’t particularly think that any part of a game should be locked behind any additional price than the base price. Regardless of whether you can earn items available through microtransactions in-game is irrelevant. You’re creating an artificial barrier between the player and the game which serves to irritate or entice people into spending more money.

I’d prefer Metal Gear Survive not to have any microtransactions, but I think that’s a pipe dream. The bad thing is that this game seems really interesting and potentially a lot of fun to play, but also really looks like it’s just made for microtransactions. That’s the thing about games that lean on premium currency — they are fun. They’re meant to be so you’ll drop more cash to keep playing.

The only way I can think that microtransactions could be implemented into Metal Gear Survive without it becoming pay-to-win is through cosmetics and possibly boosters. Cosmetics you don’t need to play, even if they are cool. Boosters only enhance what a player is already capable of achieving, even though they’re kind of lame.

I have high hopes for Metal Gear Survive, but after viewing the more in-depth look at the single-player, I’m just seeing microtransactions all over it. I could be wrong, and the game may have absolutely no premium currency system. With all the controversies surrounding microtransactions in 2017, I might just be seeing ghosts, but don’t be surprised if Konami makes an announcement concerning premium currency and Metal Gear Survive before it releases on February 20, 2018.

No one can hear you scream.
Games 7 hours ago
9

The hype is building.
News 1 week ago

Metal Gear Solid remakes on the way?
News 4 weeks ago