Video games and comedy are not the best of friends. A bug in Assassin’s Creed Odyssey or Nathan Drake’s one-liners might be worth a chuckle but the medium’s interactivity usually runs counter to the timing that a good jokes needs. There are some excellent examples of comedic games and Donut County is one of them as its endless barrage of jokes make it easily a bonafide Comedy Game™. But it uses its witty quips for more than simple laughs and ends up being far more poignant as a result.

BK, the game’s protagonist, accurately matches all the raccoon stereotypes. He’s an asshole and he loves trash, which are the two defining aspects of those little masked bandits and probably most teenagers. Donut County knows that raccoons are inherently hilarious and utilizes it by making BK the primary vessel for the game’s comedy.

And it works. He’s an inconsiderate prick but gets away with it through the charming delivery of his blissfully ignorant assertions. BK’s initial reluctance to accept responsibility and deflect blame at all costs is hilarious because of how hard he tries to deny his misdeeds. This is made even funnier as the cast recounts the effects of his actions while huddled around a campfire in the giant hole he clearly put them all in. Sinking the town into the earth was obviously his doing and how the characters urge BK to admit that is a repeated source of laughs. Each of the animals even has their goofy quirks and are a fantastic audience for BK shenanigans.

The lighthearted writing is also strong enough to utilize internet humor without devolving into awful memes or played jokes. Memes are a comedic sewage drain but it uses that tone of lowercase sentences and “lol” humor and injects it with actual wit. It results in dialogue that pretends to be stupid but ends up having actual intelligence to back it up, which is an unbelievable accomplishment from sole creator, Ben Esposito.

Best of 2018 – Becoming a Better Raccoon 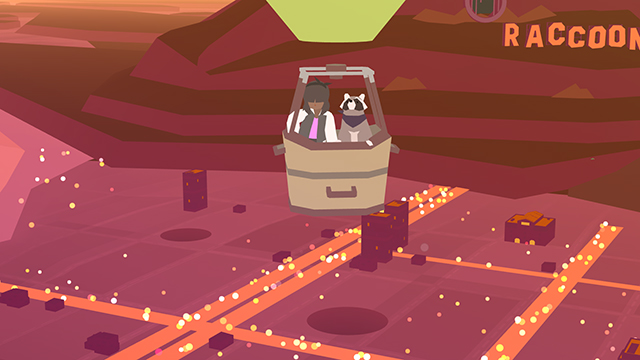 Most games can’t even get to that point as only a select handful of titles are close to Donut County’s level. But its comedy has layers and is what elevates the game far above its humorous peers. This is particularly present in BK himself. Although he starts out as a jerk, the comedy helps round him out more as a character so he’s not just a jerk.

For example, the scene where BK apologizes to Mira is particularly more effective because of how we’ve seen other sides of the mischievous trash panda. His apology seems insincere but he gives the most BK-like apology possible. He’s hesitant to admit what he did was wrong yet can’t dispute the severity of the situation when seen from a bird’s eye view. And Donut County coats this intimate realization with a few good punchlines, which stays true to the game’s tone while also allowing it have a more serious moment.

It uses the goofy writing in the beginning to warm us up to BK so that it can make us more receptive to his arc at the end. Realizing his destructive actions from aboard the balloon is a key moment for his growth because it’s where he realizes the effects of what he’s done. Serving the county “donuts” let BK fit in with his fellow dickheaded raccoons and his thirst to belong is evidenced by his skittish interactions with the Trash King. Because he fears being exiled from the raccoon clan, he’s unable to stand up to the very raccoon he has a poster of in the donut shop.

But then he does. In a grand display at the climax, BK ends up trashing the Trash King’s deal, helping his friend Mira destroy the Raccoon HQ, and undoing the chaos he caused. It’s oddly touching to see a raccoon in a cartoonish game with talking animals have a more complete and compelling arc than most serious protagonists in many AAA games. The humor sets the stage for this moment of clarity because if he wasn’t funny in the beginning, we wouldn’t care where he was at in the end.

Best of 2018 – Jumping Into a Bigger Dumpster 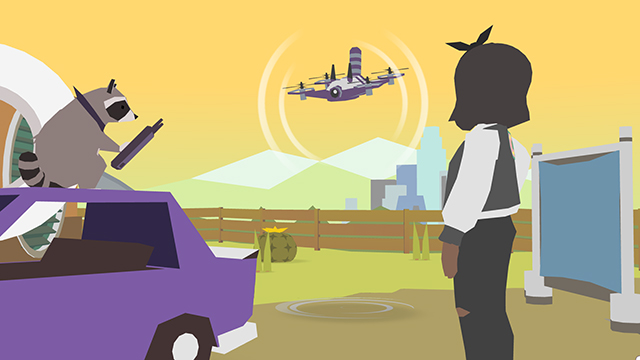 Although, the comedy pulls out and takes on a bigger issue: gentrification. I live on the border of San Francisco where you can literally see droves of homeless people shambling a stone’s throw from some of the biggest, most craven technology corporations in the country. These corporations have paved the way for the gentrification that has partially allowed for such a massive inequality gulf, particularly in the San Francisco Bay Area.

It’s not a stretch to equate the raccoons in Donut County with real-life tech companies that have also displaced the natives. Esposito has even said as much in our interview with him, stating that the raccoons’ obsession with the stupid quadcopter manifested itself out of idiotic tech bro culture.

The metaphor is pretty overt but not a one-to-one parallel, which would be a more typical, unsubtle way to tackle the subject. Equating a colony of nefarious raccoons to out-of-touch gentrifiers and making the destructive tech those companies create into a literal sinkhole is naturally funny and a brilliant way to disguise a serious topic into something more digestible. Humor opens us up to a game about silly raccoons in a way that a literal translation with a bunch of bros in plaid button-up shirts would not. After all, an app about sending actual sinkholes to destroy a city is more clever and interesting than being about a real social media app that just passively destroys a city. 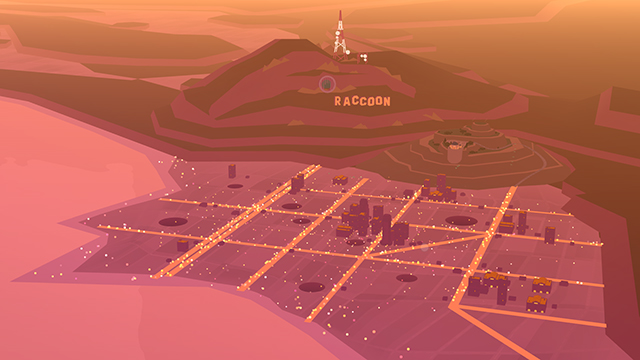 Donut County’s hole physics make for good slapstick comedy and the one-sentence descriptions in the Trashopedia are pure trash to read through. And by “trash,” I’m using the raccoon definition of “trash,” which means “gold.” But the game’s writing and allegorical premise are the true comedic stars. BK’s hysterical dialogue binds us to his personality initially just for simple laughs but it ends up being an inventive ploy to get us invested in his eventual character arc. Humor also masks the metaphorical nature of it all, draping a serious topic into something innocent enough to pay attention to. It’s a goofy concept that gets justice through its impeccable writing.

Donut County should not only be commended for its ability to go above just a dumb game with cheap laughs but also for using its humor creatively to get us more invested in character arcs and societal issues. It may seem out of character for a game like this to go beneath the surface, but maybe it isn’t, considering that the title is all about digging holes and falling beneath the surface of the earth.

Batman is back in Fortnite in today’s Item Shop update

Last Stop Preview: ‘Poised to be one of the best entries in the genre’

Dying to get off on this stop.
Games 2 years ago
9

Another clean hit.
Games 2 years ago
7

Signifying nothing.
Games 3 years ago