Here Are (Most Of) The Technical Specifications For The PlayStation 4

Sony provided a technical, developer-oriented overview of the PlayStation 4 in a panel at GDC 2013 today hosted by Chris Norden, Senior Staff Engineer for Sony. The talk was so technically oriented that even my head was left spinning. Now, I could go through each thing in well-formed paragraphs, but we weren't allowed to record or even take pictures, so furious typing translated into bullet points will be much easier to absorb, yes?

– As they revealed during their live presentation in New York, the PlayStation 4 centers on five core concepts: social, integrated, personalized, simple, and immediate.

– The main words throughout the talk were "frictionless" and "seamless", with Norden emphasizing that the PS4 is meant to have connectivity to tablets, phones, and the PlayStation Vita. This feature has been coined into a new term they call "Connected UX", where "even the traditional singleplayer experience becomes a connected and social experience."

– GPU doesn't stop to perform compute tasks, and developers will have access to unified memory

– 2 APIs, one "low-level" API and a so-called "Wrapper" API that literally "wraps" around the low-level API 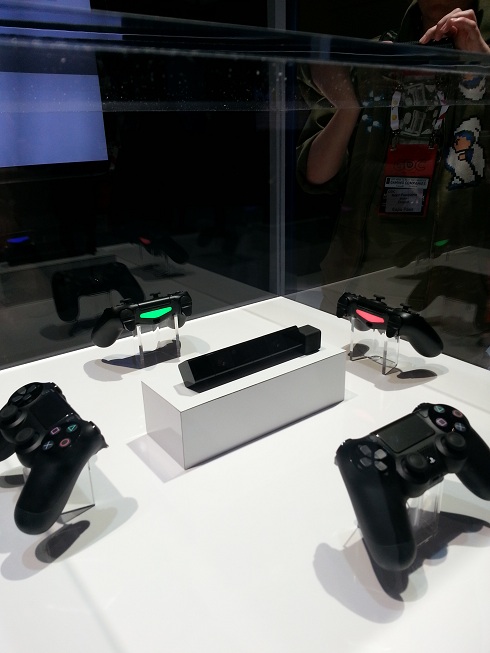 – L2/R2 buttons note: A curved design, smooth throw, and linear output (so they won't trigger if you place the controller down too hard on a table)

– Speaker: Same as headset, streamed from PS4, can be used in combination with vibration (create a feeling of the controller being "alive"

– Light Bar: An RPG LED at the top of the controller, always on when the system is on or the controller is charging, replaced the "port number" LEDs, player "number" is now player "color", the color scheme matches the action button colors (that is, Player 1 is blue, Player 2 is red, Player 3 is green, and Player 4 is pink)

– Controllers can charge while PS4 is on standby or through a dedicated charging station, light bar will blink while charging and will turn off when fully charged, the camera continuously tracks all four controllers with precise accuracy, rotational tracking is provided by accelerometers and gyros. Light bar can be used for headtracking, face recognition. Games can associate a profile with an avatar, for all four players.

– Camera can be used for easy walkthrough videos, user-generated content, voice and videochat, voice/video messages, taunting, face login, speech recognition, leaning when racing, peeking around corners in a shooter. Some more complex actions include being able to have split-screen always be on the correct side and have video game characters looking at the player. Compatible with the PSMove.

– New User Interface (yet unnamed): Has up-to-date informatoin about the game including videos, DLC, and other personalized data, will provide player with interesting information without the need to actually boot the game, access to social information, comments, and recommendations from friends. A digest or blog-like page will appear upon the console's bootup, showing all the personalized data from friends and games they play.

– Improved Friend System: Social network based on true names. All players have a "true name" and a "profile picture", an online ID, and PSN avatar. Of course, not everyone will know your true name by default, but it can revealed if someone adds you from Facebook or through True Name Search (though this automatic function can also be disabled).

– Some functions of this would be a social driving game naming corners after players with the best time or a player-driven story showing the percentage rate of players choosing one action over another.

– Share feature: Built-in encoder always records the last several minutes of gameplay without using any additional resources from the game. Players can even add place chapter markers in the recording by an API call. Pressing the Share button on the controller brings up the share menu on any screen, while presing it for a longer time will take a screenshot. These can be shared of course online with friends and videos can be broadcasted live to friends as well.

– Spectating: PS4 can stream out a video of live gameplay, with users being able to watch live gameplay videos with the player's face visible in the corner. Users can "react" to the video by typing comments in real-time.

– Remote Play: Content from the PS4 can be streamed to the PS Vita over the local network or over the internet. Latency depends on connection type and speed, but will mainly be quite high in homes. PS4 video output will not be disrupted due to remote play. Doesn't require any extra game resources and can be started at any time without needing to enter a special mode. Uses tech from Gaikai. Plays on Vita's native resolution with L2/R2 triggers and L3/R3 mapped on the touchscreen and back touch pad on Vita.

– Multi-user support: PS4 supports multi-user login. All of the peripheral devices belonging to the user, not the system. Save date belongs to the user.

– PSApp: Allows Android and iOS to interact with PSN and PS4. User can participate in the PSN community on the go, and the Android or iOS device can be used as a second screen for interacting with and controlling PS4 as well as games running on the system. Can be performed through an official app or an app that the developer makes themselves). Thus, a user can initiate a download on the PS4 via PSApp if that user isn't at home, so that the download is complete when the user arrives at home.

We've got to go back!
Games 6 days ago