When the Umbrella Corporation had its Initial Public Offering (IPO) a couple years ago, it seemed like a great investment opportunity. Here was a highly publicized, up-and-coming high tech company with a unique focus: combining video games and biotechnology. Sure enough, just like E-Bay and Amazon.com, the stock price soared. However, also just like E-Bay and Amazon.com, their plan for making money seems to be slightly flawed.

The corporate strategy seems very clear, and has been repeated several times now: Build a secret laboratory, infest it with zombies, and then blow it up. While I admire their commitment to this non-conformist business plan, it seems to have some fundamental problems.

First off, let me just say that I support the use of zombie workers. They don’t require pay, they never take sick days, and they’re always trying to… umm… ‘recruit’ new zombies. On the other hand, even I must admit that zombies make notoriously bad scientists. Instead of performing experiments and analyzing DNA samples, they always seem to be much more focused on eating brains and breaking things. Oh well, at least it still makes more sense than Priceline.com.

Umbrella’s latest venture is called Resident Evil: Code Veronica, and
this time it’s for the excellent zombie gaming system, the Dreamcast. In only
six months, the Dreamcast has already brought us House
of the Dead 2, Zombie Revenge
and Carrier – each one chock full o’ zombies. However,
Code Veronica is by far the best of the bunch.

This time, the Umbrella boys built their base on a secret island that I’m just going to call ‘Zombie Island.’ The graphics used in the construction of this new laboratory are nothing short of phenomenal. The settings are all super-detailed with great lighting and other environmental effects. Plus, the lab is huge, complete with attached prison, military training facility, palace, haunted house and underwater airport. You heard me, underwater airport. And that’s just Disc One in this two-disc game. They may not employ the most intelligent architects at Umbrella, but they certainly spare no expense.

Of course, the best thing about the environments is that they are finally, totally, completely 3D! No more still backgrounds; this is the first Resident Evil game that really moves. The camera is really good too, with cinematic angles and seamless transitions. There’s even a first-person mode to uncover after beating the game.

The rest of the graphics are up to par as well. Umbrella prisoner turned heroine
Claire Redfield looks fantastic as she takes on the zombies in a desperate search
for her brother Chris. Fellow escaped prisoner Steve (whom I call ‘Teenage Steve’)
looks good with his double machine guns and Leonardo DeCaprio hairdo. 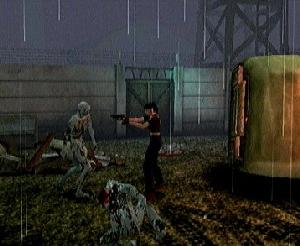 And all my zombie
friends look just terrific. With sharp textures and motion-captured shambling,
these are the best looking zombies ever. Simply put, Umbrella has put together
some of the sweetest game graphics to date for any system.

But other than the stellar graphics, Code Veronica is pretty much exactly
the same as previous Resident Evil games. In fact, it reminds me most
of the very first one. This is both a good and a bad thing. It’s good because
it has the incredible mix of action, exploration, puzzles, horror, depth, shock
and intensity that all the RE games have had. It’s bad because it hasn’t
really advanced at all in its gameplay.

In fact, many of Umbrella’s improvements that I loved in Resident
Evil: Nemesis – the creepy city setting, the multiple paths, the ability
to dodge, the random zombie chaos – are all suspiciously absent. And so all
my ‘old’ complaints remain in force: The “wrong” architecture. The fact that
I can’t open a locked door with a grenade launcher. And of course, the stupid
puzzles. It’s not that you can’t solve the puzzles (some are so brainless, a
zombie wouldn’t even eat them), it’s that they make no sense. Why is it that
when I put the ‘piano roll’ into the player-piano does the bottom half of a
slot machine open up to reveal the ‘silver key’? Who set that up that system?
It just makes the game feel less real.

Strangely enough, the horrible voice acting, a mainstay of the RE series, has actually improved a bit in Code Veronica. Notice that I didn’t say it was good. The best actors in the game are still the zombies, moaning in perfect accompaniment to the creepy background music. Oscar quality.

However, these are all small flaws in was has been, and still is, the greatest survival horror series of all time.

Code Veronica has finally brought both depth and long, satisfying gameplay
to the Dreamcast, a thirst quencher after too many arcade quick-fixes. And I
love it. The jaw-dropping graphics will have your friends sitting around just
watching you play (and perhaps “helping”), especially after you turn off the
lights. “Go left. No, left. Look in the box. Now try th.. AAAAGH!” they’ll cry.
With long, intense gameplay, this is a purebred, zombified winner, and a necessary
addition to any Dreamcast library. Hmm… maybe I won’t sell my shares in Umbrella
Corp. after all.

Bigger and best.
Tech 1 week ago
6

So close, no matter how far.
Games 2 months ago
8