The ChuChus are happy little space mice who spend their days running around the
spaceport, eating cheese, and being generally mousy. Though they live in peace
and harmony, they’re also under constant threat from the neighboring KapuKapus
(space cats). This year, due to the warm summer, the KapuKapus experienced a population
growth and have infested the spaceport that the little ChuChus call home. Now,
the ChuChus must flee in their rockets to escape the jaws of the rampaging KapuKapus.
Aww, isn’t it cute? *gag*

Why
do almost all puzzle games have a large “cute” factor? Tetris had the
dancing Russian. Bust-A-Move had more cute creatures then the last Hello
Kitty convention. Now along comes ChuChu Rocket, starring adorable little
mice being chased by lovable swirly-eyed cats. It’s almost enough to make you
swear off video games. But then you begin to play the game and, just like Tetris
and Bust-A-Move, you realize that the game is actually really good.

The plot, as you can see above, was thrown together to try to explain the game itself. For example, there’s an entire page in the manual for character introductions, but it has an asterisk that states “The following characters do not appear during gameplay.” Why then, do you give them names and personalities? Because it’s cute, of course.

While the plot is non-existent, the gameplay makes ChuChu Rocket one of the best puzzle games ever. The goal is simple – guide your little ChuChus to an escape rocket before the cats eat them. You do this by dropping arrow panels on the ground. When a ChuChu steps on the panel, it turns the direction the arrow points. Sound easy? Well, it is . . . at first.

There are numerous ways to play both single and multiplayer. If you’re all by your lonesome, you can play the puzzle game, where you have to find out what specific placement of the arrow panels will guide your ChuChus to safety. You can also play Stage Challenge, where you have to get your ChuChus to complete specific tasks within the time frame. Even after you become the Master of Mice, there’s still more to do. 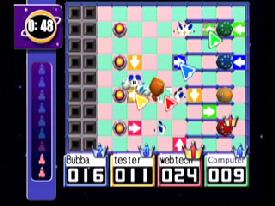 The
multiplayer options are amazing. Multiplayer is much more fast-paced than the
other modes. The goal is to get the most ChuChus in your rocket while sending
as many cats as you can to your opponent’s. You can battle two on two, cooperate
on the Stage Challenge, or even connect to the Internet. Yes, folks, that’s
right. It’s been over six months since the launch of the Dreamcast with its
built in 56K modem, but finally, we have an Internet multiplayer game on the
console system.

Picture, if you will, a lazy evening. Two of your friends show up, and you want to play some ChuChu Rocket. However, you really want to play with four people. Well, that’s no longer a problem. The three of you, each with a controller in hand, connect to the Dreamcast Network to find a fourth. Make friends, make enemies, but most of all, show off your mouse-handling prowess.

Since ChuChu Rocket is the first Internet multiplayer game on the console, many of you might be interested in how it works. Basically, the only difference in gameplay between playing with four people at one Dreamcast and four people spread over the Internet is a one-second lag for every action. In order not to give an advantage to players with a better connection, the built-in one-second lag evens the playing field, and is remarkably unnoticeable after awhile.

Playing ChuChu Rocket isn’t all you can do online, either. There are chat rooms where people can share ‘Chustrategy.’ Just in case you didn’t think there was enough gameplay, you can download new puzzle levels to your VMU and play them to your hearts content. You can even use the Puzzle Edit option to create your own levels and upload them to the Internet. Now that’s replayability.

The only drawback to the game is the unpolished feel you get when you start
the game. There’s no intro movie – just straight to the mode select screen.
I would’ve loved to see a short movie along the same vein as that bizarre
Japanese commercial. While it may have confused many gamers, it would make
it seem less like a budget-title . . . though the $29.99 price tag eases most
of the pain.

If you’re looking for the most graphically impressive, eye-bulging, jaw-dropping
game for the Dreamcast, you definitely should not look at ChuChu Rocket.
If, however, you want a solid puzzle game with literally infinite replayability,
get out there and launch some mice into outer space. I’ll hold on to your Keroppi
bag and wait for you here.

All the magic of a real arcade without the risk of electrocution!
Originals 3 years ago
9

Where no horrible gelatinous blob has gone before. Drinkbox have managed to create something that's quite difficult in video games:…
Games 11 years ago
3

Maybe they’re warming up. Ten years ago, Sega was saved from total annihilation by the selfless heroics of a true…
Games 15 years ago
6

They’re no A-Team, but they’ll do. Review

They're no A-Team, but they'll do. It seems really hard to constantly devise new game ideas. How many different ways…
Games 20 years ago