Lately, there has been something very weird about California weather. While the rest of America was going through a massive heat wave, we were having a murky and dreary June, July and August. Now it’s October and summer has finally decided to kick in. So to beat that heat, it’s a good thing I have a powerboat and some lovely ladies to go crusin’ with. Well, just kidding about the powerboat part – it’s actually just a game.

In Hydro Thunder, you race a water boat through terrain derived from
many different world landmarks – the aqueducts of Greece, the Antarctic, and
the waterways of Venice, to name a few. During the race to the finish line,
you collect power boosts, search for secret shortcuts, and basically terrorize
other watercrafts fool enough to cross paths with you.

There are four sets of tracks: Easy, Medium, Hard, and Bonus. You start with
access only to Easy, and if you place third in all three of the tracks, you earn
the Mediums. Place second in all three Mediums to earn the three Hard tracks.
Come in first in all the Hard to enable the four Bonus tracks. Grand total? 13
tracks. [way to add, Johnny. – Ed.].

During the races, you are given a certain amount of time to make it to a checkpoint; at each checkpoint, you’re granted more time. While it isn’t the deepest racer, there is a fair bit of strategy involved. The only way to win is to collect the speed boosts. It will take some repeat plays to learn the course setups and where all the boosts are.

The control has the feel of racing a boat. While I’ve never actually raced
in high-speed waters (the largest boats I ever commanded are a paddle-boat and
a canoe), there’s something about the way the boats zip and bob that translate
the feeling of gliding over water. The analog brakes and acceleration allow for
simple, clean controls. 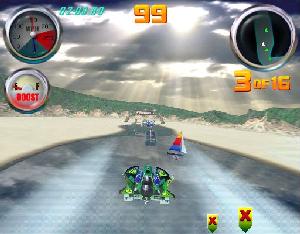 The water effects are the best thing about the game. Leaping off a cliff and looking
down at the expanse of water you’re about to hit is exhilarating; as the force
of gravity pulls you down, you can see the mountains and trees reflected in the
water… so peaceful, so tranquil. The boats don’t look quite as sharp and pretty
as the water, but you’ll be too busy looking at the backgrounds to worry about
it.

The music and sound effects fulfill their role of pumping the player up for racing. Event noises, like the screams of an Eskimo as you knock over his kayak, add to the personality of the game.

The boat selection screen needs a little more polish. Initially, when you select your boat, you have nothing to base your choice on except for which looks the coolest or has the goofiest name. It would have been helpful to have a visual indication of the statistics and abilities for the different boats. There’s even a blank spot that would fit a little bar graph perfectly.

Options for restarting a race, time trials, and free exploration are sorely
missed. This indicates a somehwat rushed port – what you’re getting is the arcade
game and nothing more. Nowadays, players expect a home release to offer more.
Thankfully, no major losses were made in the gameplay, though the other minor
snafus do add up.

The promise of more tracks and new boats extends only so far. The limitation
of having only the arcade game and nothing more hurts how much play you’ll get
out of this game. But if you’re looking for a Dreamcast racer to float your
boat, Hydro Thunder certainly merits a try. 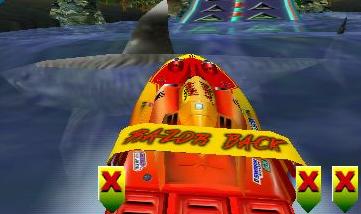 Enter the world of XLR.
Tech 1 month ago

Here are all of the bug fixes and new additions.
News 2 months ago
7