Every once in a while, things catch fire. A patch of dry grass. The Oakland
Raiders. The all-powerful Sal Magicpants, perhaps. Also making the “hot” list
recently is Sega of America. With a slew of top notch games including Jet
Grind Radio and Shenmue, this winter’s
Dreamcast lineup is spicier than a chili pepper in Mario’s meatball sauce.

Continuing the hot streak is one of Sega’s best and brightest RPGs to date.
Join Vyse and his crew of air pirates in their adventures through the Skies
of Arcadia.

The storyline is familiar and conventional. An evil dictator is looking for
a weapon of mass destruction and our would-be hero is out to save the world.
Players take to the skies above and the dungeons below in search of mystical
items and rare treasures. They battle strange looking monsters and evil henchmen
in turn-based combat, becoming more powerful fighters/spellcasters in the process.
Eventually, they gain enough power to stop the bad guys and save the world.
Theoretically.

Even with this basic premise, Skies of Arcadia manages to develop an
interesting plot with lots of twists and turns to keep things interesting. This
is one tale that RPG fans will thoroughly enjoy.

Now if Skies of Arcadia was an average game, I could just throw in
a few words about graphics and the review would be done. But alas, the Skies
hold much more treasures for role-playing fans. Shall we commence with the goodies?

In order to boost the typical RPG combat to a higher level, Skies of Arcadia
includes element-based weapons. Upon obtaining a Moon Stone, characters will
be able to imbue their weapons with elemental properties based on color. Think
of it like Magic: The Gathering (the card game) or even Pokemon.
For example, yellow (lightning) weapons have an advantage over green (earth)
creatures. Usage of each weapon type also boosts that character’s equivalent
magic powers. Use your blue weapons a lot and you’ll boost your blue magic skills
that much faster.

The world in which Skies of Arcadia takes place is large, with plenty
of places to explore. As a sort of side quest, players can freely explore the
world in their airship and discover hidden lands and landmarks. Hunting for
these secret locations can be fun on their own and info regarding the discoveries
you make can be sold to the local sailor’s guild for a nice chunk of change.

Adventures in the sky lead to another take on the turn-based combat system.
Sky battles can happen with ships instead of swords. Players enter a string
of commands and then watch as the crew carries them out. Occasionally, players
will also have to decide the ship’s strategy, such as closing in on the enemy
or keeping a safe distance away. While these ship to ship battles are a bit
more interesting than the hand to hand combat, they tend to be drawn out way
too long. 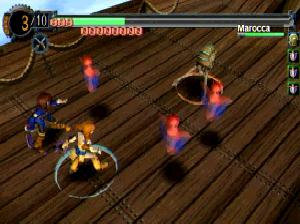 Eventually, when Vyse gets a ship of his own, you’ll also need to find a suitable
crew. Gaining specialized crew members, such as a gunner or engineer, will boost
different parts of the ship. So you won’t just be hunting for treasure and new
lands, you’ll also have to be on the lookout for new crew. There’s just so much
to do within the world, you’ll never be stuck in any one place doing just one
thing.

Within the dungeons you’ll also come across a few puzzles to solve. While
none of these are particularly challenging, they offer some nice variety.

The graphics are top notch. Skies of Arcadia shows off smooth and detailed
environments as well as very solid anime-styled characters. Even the cool looking
spells and super moves put on a dazzling display
of color and light.

Surprisingly, bits of audible speech are thrown in every once in a while.
The voices are cheesy at best, but it was
nice of them to give it a shot.

The most enjoyable aspect of Skies of Arcadia is the way the game flows.
RPGs that follow the typical dungeon/town/dungeon pattern get really dry and
boring. In Skies, the story, as well as the ability to freely explore
the map, move the game along at a brisk pace. Even the dungeon expeditions move
along nicely. You won’t have to endure level after level of similar looking
environments, desperately looking for the next save point. With this type of
gameplay, you’ll never feel like you’re stuck in one place for a long time.

So whether you’re a classic RPG gamer or a newbie to the genre, you’re bound
to have some fun with Skies of Arcadia. With a great presentation and
a well-developed story, this is definitely not a game to miss. 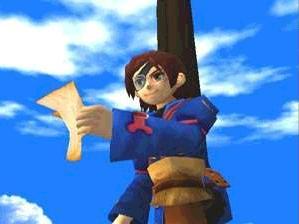 A touching moment.
TV 1 hour ago

Enter the world of XLR.
Tech 1 month ago
8